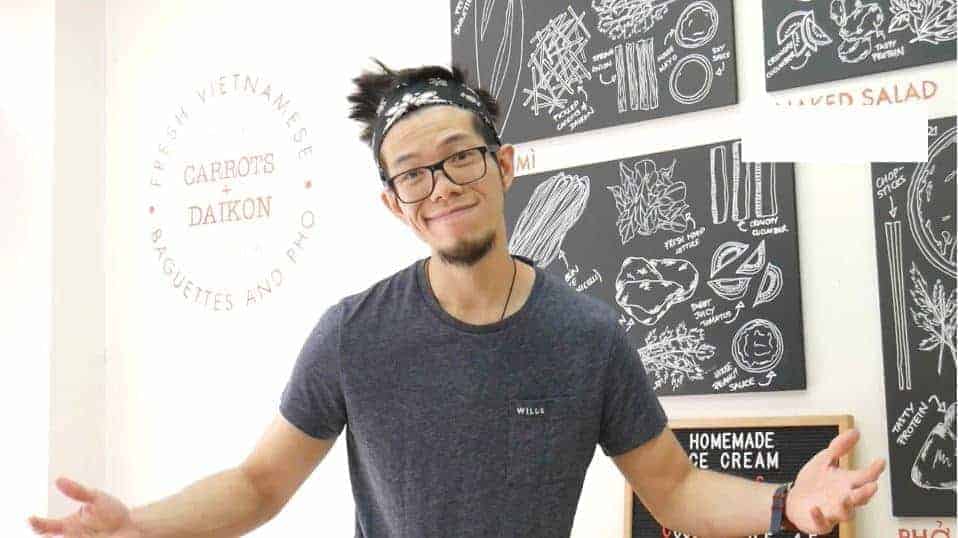 Dim Sum, a Beginner’s Guide to the Cantonese Cuisine

Loved by locals and office workers in Kentish Town, Carrots & Daikon specialises in on the go healthy Vietnamese food in North London. Enjoying an almost perfect 5-star rating on TripAdvisor, Carrots & Daikon is widely considered as one of the best Vietnamese delis in London.

Ran by 27 years old David Chu, Carrots and Daikon has been in demand for its fresh, homemade food since opening its door in December 2014. Recently celebrated its five-year anniversary, David shares with Honest Food Talks his experience of starting his own business at the age of 23.

No one has ever said starting a business is easy. David’s journey of how he started a successful deli in Kentish Town is an inspiring read for anyone looking to venture into London’s competitive food and beverage industry. Find out how a leap of faith and motivational drive led David Chu to build one of North London’s best Vietnamese deli shops.

Start to the Best Vietnamese Deli in North London

Growing up eating his mother’s delicious homemade food which she had learned from generations before and developed her own twist; sparked the idea for Carrots & Daikon.

“It was my mum’s cooking that inspired me,” says David Chu.

“I just thought it would be a great idea to bring something fresh, healthy and nutritious to Kentish Town and wider North London,” adds David.

His first foray into London’s food and beverage industry was through market stalls at various venues across the city. Whilst the average 20 years old would still be in full-time study, David made extensive use of term holidays during university to gain more experience and further develop his business idea for a healthy deli.

“Just had the idea for a while and did research, a lot of it!” adds David. From working in retail and hospitality, he took parts that were relevant and applied it to his business model.

After spotting a gap in the market, the location of the healthy deli shop was a strategic decision from the young entrepreneur – but also a difficult one.

“There was one place in Camden town and one in Holloway but there wasn’t one in Kentish Town. There wasn’t much Vietnamese food around and we wanted to introduce something different,” says David.

It took over a year to pinpoint the perfect spot after David finished his business management degree. At the age of 23, David Chu officially opened his first business in North London.

Support from Friends and Family

Playing a pivotal role in the success of Carrots & Daikon, David recalls the continuous support he received from his mother, college friends, and his wider family.

“My mum believed in me. After many tears and arguments, she backed the idea; she saw potential and we took it from there,”  says David, looking back at the Vietnamese deli in London.

He adds, “My mum had her own business, but she always knew I wanted to start my own business and I would never just settle in an office job. So, she wanted to just at least put shelter on the top of my head! My college friends also helped me a lot.”

With support from some friends, David was able to design the layout he wanted for Carrots & Daikon. The minimalistic decor and painted white walls plays a big part in bringing in more light into the shop. The menus are written on chalkboard panels so the dishes can be changed around.

“Phil helped designed my tabletops, the layout, and artwork. Helen, another friend helped with the operational side of things. I wanted it to be an open kitchen. That’s quite important, so people know that they’re food is made right in front of them and we’re not hiding anything,” says David, explaining his thoughts on the layout of the deli shop.

“I had a lot of help from family and friends, and was able to do focus on other parts of the business because of them. ” adds the humble entrepreneur.

Delving into some of the challenges he faced starting a business at an early age, David shares his key takeaways.

“It’s all down to maturing. It definitely takes a lot to learn as you go. You think you know what you’re doing but you don’t actually. Go about doing it, you critique and re-critique the skills you thought you had. You reflect on everything; you get a lot of feedback from family and friends. I think they always give honest answers instead of agreeing with you all the time. So it’s always nice to hear different perspectives and what other people say. Take all that upon and make judgments based on that. But definitely, it takes a lot of drive to do something like this,” says David.

“You learn a lot while you’re doing it. As much as they [business management] teaches you, it won’t cover everything. The whole practical side of it, you physically have to go do it, go talk to people in order to improve on it and know for yourself,” adds David.

David believes that a lot of the learning for a business model in the food and beverage industry happens in the first two years of running.

“That’s so important because you’re able to improve on what you already started with which a lot of businesses nowadays can’t. They don’t have the time and money to do it, but I did. I had the support of my family and friends. Their patience as I experimented and changed the menus three-four times, changed the opening times seven times until we settled on what we have now. ”

Handling the Highs and Lows

With the economy over the last few years, many local businesses have not been able to survive in the competitive industry. “I guess I didn’t realise when I started at the beginning that it is quite costly to starts up a restaurant or a café because it’s quite expensive to get into.

Lots of places opening up, lots of places closing down; many closing within a year or two. Because of high rents, VAT and council tax, corporation, it was picking up slowly. A lot of businesses just wouldn’t be able to survive if they didn’t have a sustainable sort of revenue, regular customers, repeat customers to be able to sustain revenues week in week out. Businesses go out of businesses really quickly if they’re concept not well developed or people don’t like it.

If they don’t have time to work on it which when I started, I did have time to work on it because the economy was better then. Right now, there’s uncertainty with Brexit, uncertainty with food supplies. We have no idea if the trading prices will be different and how that would affect us. We’ve been able to be here because we have a sustainable number of customers who do come back. The survival of our businesses is our customers,” says David.

Attracting a large number of returning customers to Carrots and Daikon every month, David has collected over 1,600 loyalty cards over the past year. Of this figure, one-fifth of the collected loyalty cards now fills an entire wall in the Vietnamese deli in North London.

“It has always been to provide good Vietnamese homemade food to as many people as we can.”

“Chicken pho is probably my favourite and the go-to if anyone asks. It’s the thing I grew up eating, nice hearty soup for the cold winter day. Then, it’s the honey caramelized pork with bun noodles (Bun Cha). Marinated pork grilled up with salad and vermicelli rice noodles with chili fish sauce and peanuts on top. Which is also one of our best sellers. We also have baguettes, summer rolls, we try to cover as much as we can.”

Carrots and Daikon offers a large variety of staple Vietnamese eats and makes it easy for customers to customise their orders. From ordering baguettes, summer rolls to quinoa salads. The dinner service offers a slightly different menu to cater to the evening crowd with more time to wait.

“During lunch, most of our customers are office workers. We try to get them in and out of the shop within two-three minutes of ordering. For dinner, we try to make it different, for those coming in. We cater to locals who can afford to wait for an extra five to ten minutes.”

So What’s Next for Carrots & Daikon?

Constantly looking to learn and develop, David plans to explore different business ideas.  One of which has been to sell homemade bottled siracha as well as ice cream for customers to take home a piece of Carrots & Daikon.

“I’m enjoying my weekends. It’s a lot easier now, we have a good customer base, we have everything routine and system. All our menu works. I think moving forward with Carrots & Daikon, we’ve always wanted to open a second branch but realistically it’s quite hard. Having this one shop, I’m perfectly fine with it. I think a lot of people focus on expanding, but for now, I want to keep it quite central and how it is really. We’re still here, we’re doing something right!

Fresh homemade food, that is made from the heart. It’s all about providing people better healthier alternatives.”

Looking for more delicious cuisines to try in London? Try ramen noodles next.

Dim Sum, a Beginner’s Guide to the Cantonese Cuisine