Chicken and sweetcorn soup is a rainy day takeout favourite. Given the simplicity of this dish, one can actually easily recreate it at home as well. After extensive research and trying some of the best recipes out there ourselves, we think we've nailed this dish.

Find out how to make this Chinese takeaway classic in the comfort of your own home!

Chicken and sweetcorn soup comprises ingredients, such as garlic, ginger, sweetcorn, chicken, and onions simmered together. Seasoned with sauces, we serve it as a warm broth.

It is a popular Chinese takeaway starter for time-starved people who like to eat out. Because of the inexpensive ingredients and easy cooking, many modern cooks have added this to the family dish menu.

It’s hard to say when the dish became popular in the West. Chinese immigrants brought the cuisine over to America in the 1920s and apparently it was a hit amongst home cooks.

After World War 2, chicken and sweetcorn soup was no longer considered authentically Chinese, and different variations appeared. For example, chicken and corn soup in Pennsylvania combines poultry meat and corn kernels, flavoured with saffron and eaten with egg noodles. It was not until the 20th century when ordering takeout became a norm that the dish gained popularity again.

Interestingly, in the United Kingdom, Chinese restaurants expanded rapidly from the 1990s onwards. This meant that many Chinese cuisine dishes like salt and pepper chicken wings, sweet and sour chicken balls, as well as chicken and sweetcorn soup, quickly became known dishes in the local populace. With the convenience of express take out provided by these restaurants, they soon became an often ordered take-out dish and remains even so until today.

In these Chinese restaurants, the meat and vegetables are in smaller pieces. Crunchy peppers and onions are used, along with bean sprouts to make the dish fresh and appealing.

Is chicken and sweetcorn soup healthy?

This easy chicken and corn soup is heart-healthy. The key ingredients of this dish contain omega-3 fatty acids and natural oil. This fatty acid combination reduces the risk of heart-related illnesses. The meat also has beneficial properties, like Vitamin B12 and Tryptophan. These help increase amino acids in the body, needed for good health.

In particular, Tryptophan supports the production of serotonin, which stabilises our moods, and melatonin, which regulates sleep patterns. As chicken and sweetcorn soup is high in protein, it is good for those who want to focus on building muscles. Drinking this also gives you beautiful skin, thanks to the many healthy ingredients in it!

Chicken and sweetcorn soup has about 250 kcal of calories. This is for a medium-sized adult bowl that holds 150 grams of the dish.

The most important ingredients in this healthy chicken and corn soup that you’ll need to purchase are:

When buying poultry, check that the packaged meat at the supermarket has a pinkish tinge and no liquid pooling. Do check the expiry dates as well. For this recipe, choose parts of the meat that you like best. Otherwise, using either thigh or breast meat does not really matter.

To add more protein to this easy chicken and corn soup dish, include rice noodles. Rice noodles are thinly sliced and do not overpower the dish. Else, you can cook porridge to accompany this dish instead of noodles, for a lighter version.

The cornflour and stock thicken the dish and add flavour, while the vegetables enhance the freshness of the broth. You can find these ingredients at the local supermarket easily.

Garlic, ginger, and onions help to give the chicken and sweetcorn soup a crunchy texture.

For the vegetables, you can cut corn off a fresh maize cob, or buy a tin can of sweetcorn. While this is key to this dish, if you prefer it to be less sweet, just substitute it with other green vegetables such as bok choy, broccoli, Chinese cabbage, mustards. Mustards pair well with the stock.

Finally, some Chinese recipes recommend adding ginger, rice wine and dried goji berries. It might not be easy to find rice wine and goji berries, but if you have access to them, add these ingredients to your chicken and sweetcorn soup. Many Chinese broths add this to get a bold, slightly bitter taste to balance out the sweetness of any vegetables.

These ingredients, with cream, can also make a heavier version of the dish. For a Thai twist on the recipe, add coconut milk, lime leaves, and lemongrass for the zesty profile of Thai food.

In this section, let’s look at some cooking tips to make your cooking attempt at chicken and sweetcorn soup successful.

First, it is advisable to submerge the meat into a solution of salt and water before cooking it. This technique is known as ‘brining’ and allows the meat to soak extra liquid and salt, becoming tender and juicy.

Next, if you can, use cured or roasted meat as it adds a soothing smoky aftertaste to the dish. Chicken and sweetcorn soup is best enjoyed when the meat has been well-cooked before adding to the broth. If you are using recooked leftover meat, shred it gently with your fingers when it is no longer hot.

The meat aside, think about how thick you would like the broth to be. We recommend adding eggs to make the soup richer. However, if that is not enough, adding tinned creamed corn will create a pungent version of the dish. With chicken or vegetable stock also added, you’ll be able to achieve a much thicker chicken and corn sweet soup.

The benefit of using a slow cooker instead of a stove to cook chicken and sweetcorn soup is that you will be able to obtain more intense flavours in the dish from the ingredients, especially the meat, without adding additives.

Since the heat is regulated and there is less evaporation, you’ll be able to control the richness of the dish without having to second-guess the heat required.

Most Chinese cooks would use 8 hours to boil Chicken and sweetcorn soup in a slow cooker. However, you can reduce the time by using high temperatures and boiling the dish for 4-5 hours instead. The general advice is that one hour of high temperature is equivalent to two hours of low-temperature boiling.

Other variations of Chicken and sweetcorn soup are pork corn soup, corn cheese soup, as well as shrimp and corn soup. While they are made the same way, the meat used is different.

Pork is a favourite type of meat to use for cooking amongst the Cantonese, as they use it to cook tasty sweetcorn carrot soup, commonly known as “ABC” soup. The name “ABC” is because of the vitamins A, B and C it has from the ingredients inside the broth.

Corn cheese soup is a family favourite dish from India, and the Indians cook it with the same ingredients like chicken and sweetcorn soup. However, they first saute the onions in the broth in butter, before adding them to the dish. Grated cheese is also thrown into the mix.

Lastly, some prefer to use shrimp meat or shredded imitation crab for the broth. This dish seems to be well-received in New Orleans, and the New Orleans recipe adds cajun seasoning and melted butter to create an intense, spicy version of shrimp and corn soup. 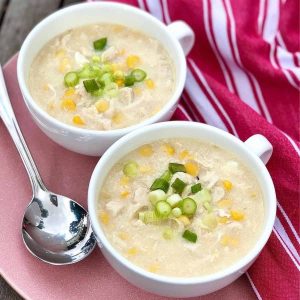 Ellaroy Youtube Channel has a simple-to-understand video recipe that explains the full process of making the healthy soup recipe. Do check their video out to have a better understanding of the recipe!

And you are now ready to serve a piping warm bowl of chicken and sweetcorn soup, especially nourishing for those cool, rainy days.

If you have enjoyed making this recipe, show off your creations and follow us on Pinterest so we can celebrate your success with you!

Are you looking for simple and easy Asian recipes to make at home? Do you have a trusty air fryer in your kitchen?

Then, check out a few Asian air fryer home recipes next!