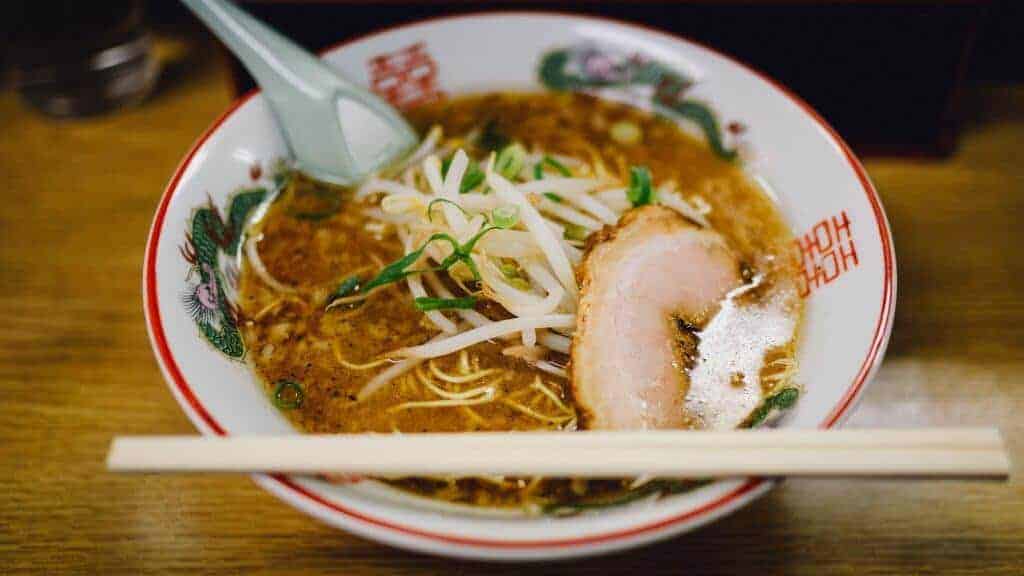 We explore the origin of ramen noodles, the different types, and breakdown the key components which make a delicious bowl of noodle oodle goodness as Japan’s national dish gains popularity in London.

Where do ramen noodles come from?

Ramen (ラーメン) originates from Japan but many people think the dish evolved from Chinese cuisine between the late 17th to early 20th century. It was originally consumed by the Japanese working-class men and labour workers because it was a quick and filling way to refuel.

In the late 1950s, instant chicken ramen was introduced to compete with fast-growing street vendors selling the popularised dish to workers and students during the reindustrialisation period after the world wars. As competition continued, restaurants specialising in solely the Japanese soul food began to appear in Japan and the States with some coming to the UK in the early 1990s.

For more on the complicated history of Japanese dish, NYU professor George Solt’s book on Japanese cuisine does a good summary.

This is a major, if not the most important component. Food critics often characterised ramen by kansui. Kansui is the mix of two alkaline salts; potassium carbonate and sodium carbonate.

It gives the wheat flour noodles its springy texture and bright yellow colour in appearance. Varying the amount of kansui water will alter the texture as well as giving it an eggy flavour.

Typically, the noodles can vary depending on the shop, from thin and straight to thick and wavy. Some shops will let you customize your noodle order such as selecting the thickness (usually thick, regular or thin) and firmness (regular or extra firm).

The soup base is made from boiling chicken or pork bones for long hours. This makes a stock with key ingredients such as kombu seaweed (kelp), shiitake mushrooms and onions. Prawn based broth is also becoming popular in parts of Japan.

This is the soul of the broth. Tare translates to dipping sauce in Japanese and is the key seasoning ingredient (base flavour), the source of saltiness in the soup. Added to the bottom before the hot broth is poured in, this blends and disappears. It is also the most secretive part of a chef’s recipe.

Complexity in taste is achieved by adding small amounts of highly aromatic oil. From spicy chili oil, black garlic oil to blocks of butter and truffle oil, varying the amount of oil adds a unique flavour punch and helps the noodles stick better to the fatty soup.

With each of these Japanese ramen noodle ingredients varying from regions in Japan, there are so many creative possibilities to a simple 101 bowl of noodles. Shio (salt-based), shoyu (soy sauce-based), miso (soybean paste-flavoured), and tonkotsu (pork bone broth) are the four main types.

The broth is light, clear in colour. Chefs will make the soup base from chicken bones and sometimes pork.

This is the most common type of soup base you will find and is usually what is served in Japan when the menu doesn’t specify the broth. Similar to shio, this is also a clear soup but brown in colour as it comes from the soy sauce.

This soup base was originally created by people in colder regions of Japan as a thicker and heartier soup base to consume in the colder winter days. This is a thick soup base that is brown and has a rich taste from the soya bean mix used.

In contrast to other soup types mentioned above, this soup base is cloudy white in colour, thick and creamy. Commonly, Japanese chefs will boil a large number of pork bones for long hours to create a rich, cloudy white broth. This broth type is extremely popular in Kyushu and even more so in Fukuoka city.

Based on these four types of base flavours, different parts of Japan have created their own regional styles with individual restaurateurs coming up with new flavour combinations all the time.

Newer variations include beef fat in broth or as garnishing oil, slow cooking prawn heads to make a seafood base. In addition, some restaurants are making the dish completely vegan! Typically this is done by using only kelp to create a light broth, adding fried shallot and red pickled Japanese radish. Afuri in Tokyo does particularly a good job of making vegan and vegetarian variations of this dish. Furthermore, other interesting concepts that are being explored by chefs include soupless ingredients and karaage (fried chicken).

Despite the fact that cold noodles and tsukemen (dipping noodles) are less common in western countries, these are popular meal options in Asia’s summer heat. However, both of these options did not exist until almost 20 years ago and are a result of pure inventions of restauranteurs experimenting creatively with the broth.

With so many combinations available, this Japanese soul food seems like the perfect meal choice for anyone.

Are Ramen Noodles for Everyone?

Hiroshi Osaki, known as the godfather in the gastronomical world, eats an average of 800 bowls in a year. He has visited over thousands of restaurants across the world. Noteworthy, the acclaimed food critic has mentioned from time to time in interviews that he has never met the perfect bowl of ramen.

“Ramen can change, I can’t say that the noodles or soup should be one way or another. If that were the case, then it would stop evolving. I want it to keep improving.”

Then indeed the top or best ramen soup does not exist. The James Beard Award-winning food writer, John Birdsall would agree with Osaki that it is a simple three-part formula of noodles, broth, and toppings with infinite possibilities.

To Slurp or Not to Slurp? How to Eat Ramen Noodles

A lot of westerners think the action of slurping is rude, offensive or simply bad table manners, but this is the total opposite in Japan. So, consider it appropriate etiquette to slurp the tasty noodles as loud as you like.

When you visit Japan, it is still common to see small counter-style shops scattered in the backstreets of Tokyo, Kyoto, and Osaka. Sit down and order. Served over the counter by the chef and handed it to you while it’s still steaming hot. Receive it and slurp away with the chopsticks and spoon!

Not only because slurping is a form of respect to the chef (as well as super fun!), but speed is a major factor in enjoying the bowl of noodle soup. As the noodles absorb the soup over time and expand, it loses its consistency.

When you’re done with eating the delicious noodles, drink the soup by itself. Alternatively, ask for another portion of noodles to finish off. This is usually for free in Japan. Just say “Kaedama kudasai (替玉ください)!”

Have a small portion roast pork fried rice, an extra portion of pork belly, filling buns or a serving of five or six pan-fried gyoza. The Japanese also like to have plum flavoured or salmon flake onigiri (Japanese rice ball) as a filling side dish. Alternatively, Japanese spirits mixed with cocktails or chilled beer is a fantastic option.

Cocktail beer ramen and buns sound like a good combination to us. Food for the soul!

The popular soup dish has become more common on the streets of Central London. Over the last few years, chain restaurants specialising in the filling noodle dish has popped up across the city in locations such as Soho, Bermondsey, as well as Brixton and more.

Wagamama and Ippudo were among the first eateries to open in the city. Soon to follow suit was Kanada-ya, Shoryu, Bone Daddies and more recently, Hakata Ramen + Bar on Bermondsey Street.

As there are over 30 dedicated Japanese restaurants in Central London alone, we’ve listed some of our favourite places to go to London for a slurp-licious bowl.

Based on taste, value, and location, our overall best in London winner has to be Kanada-ya. The restaurant is easily accessible by city-goers with branches located in Angel, Piccadilly, and Covent Garden.

For value, our top picks are Shoryu and Ippudo. For those looking for more a hippy dining experience and daring noodle combinations (some are amazing and some are odd), head to Bone Daddies for a surprise.

For easy ramen recipes, head over to our recipe section. Or, try out dim sum, the Chinese way to brunch!