Korean BBQ marinade is an East Asian style marinade that has gotten much attention as Korean grilled meat cuisine grew to much popularity across the globe in recent years. The Koreans have devised their own unique barbecue style that has captivated the hearts and taste buds of many.

Korean BBQ correlates to a grilling style, including meats like pork and chicken. These dishes can be cooked on gas and charcoal grills. Other meats such as pork belly, brisket, and even squid can be turned into mouthful delicious BBQ dishes.

Bulgogi is a traditional type of BBQ marinade and is recognized for its flavourful kick. Bulgogi barbecue meats are marinated to heighten the flavour and tenderize the meats.

Bulgogi translates to “fire meat” and consists of meat, traditionally beef, marinated in Korean marinades, then grilled and sometimes stir-fired.

Bulgogi is a famous marinade, and sometimes it is referred to as a Korean sauce. However, there are other types of Korean Sauces, Bulgogi being one of them.

What Is Korean BBQ Marinade Made Of?

The marinade packs a lot of flavours and is a key ingredient of good Bulgogi.

The marinade can vary from region to region, but the most common ingredients are soy sauce, sugar, ginger garlic, pepper sesame oil, and scallions. The mixture is more soy sauce-based when talking about Bulgogi, but other marinades include pear and fruits like pineapple.

Other Korean marinade recipes are more on the spicy side and others are sweaters.

How To Make At Home

The special marinade is the key ingredient to making extraordinary barbecue dishes. One of our favourite plates is Korean BBQ Chicken.

Here is a simple recipe you can try at home. This marinade sauce can be utilized in beef and chicken barbecue recipes. 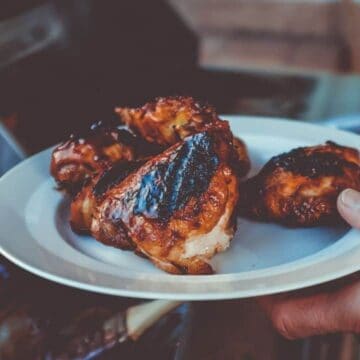 Feel free to adjust the ingredients’ quantities to adjust the flavour to your liking, as with any recipe. Experiment and see what works best with the meats and side dishes you are preparing.

Asian pear juice can sweeten the mix but add this extra ingredient at your discretion and liking.

Besides a Zip-top bag, you can use an air-tight bowl, but preferably the meat should be evenly distributed and covered in the Korean BBQ marinade.

Start your BBQ grill and preheat it to about 350 degrees Fahrenheit or 180 degrees Celcius. Be careful not to get your Grill too hot, as the sweeteners in the marinade can char and get a bit dark. Grilling at a lower temperature can help.

Place the chicken on the grill skin side down and let it come to brown colour and crisp. In about 10 minutes, move the chicken to indirect heat and let the chicken cook through.

After your barbecue chicken is done, place it on a plate and let rest just for a few minutes. Fee free to add some chopped green onions to taste and serve with side dishes such as the Korean radish pickles.

Although Korean BBQ marinade can be used with proteins like beef or chicken, many experiments and use this marinade with other meats. This is the advantage of BBQ; it opens the door to creativity and experimentation. Everyone has a different taste pallet, so it is a great idea to experiment and add your touches to any recipe.

Be Creative and Enjoy

BBQ is an international culinary art form, and as with any art, everyone has their own touch and flavour. Using marinades like the Korean BBQ marinade, marinating meats and grilling opens a world of ideas, creativity, and culinary expression.

You may even choose to smoke your meat instead of grilling them too!

The most fun part of trying new recipes and ways to cook is the learning experience. Learning different cultural foods is a great experience.

Craving for treats from Korea? Try our Korean corn dog recipe at home!