Learn how to cook an easy one-pot Moroccan Chicken tagine with tips on how to take care of a traditional tagine pot. It is a versatile cooking pot with a unique tall, and cone-shaped lid.

Although it can be used for all sorts of recipes, the most popular and probably the most traditional dish is Moroccan Chicken tagine. Just like the Spanish paella, the dish takes its name from the cookware it is prepared in.

Our recipe is based on the herbs and spices used in North African cuisine to give you an authentic flavour from the region.

If you're new to cooking with traditional cast iron or stoneware pot, you may want to check out the list of useful tips for beginners at the bottom of this article. You'll learn how to maintain your earthenware pot correctly so it will last a lifetime, as well as find some inspiration to try cooking more traditional food from the region in the future. After you have tried out this recipe, you’ll fall in love with this style of cooking. 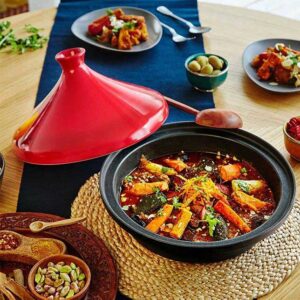 How to Make Moroccan Chicken Tagine

What to serve with Moroccan Chicken Tagine?

Moroccan chicken tagine is traditionally served on a bed of couscous or plain rice. However, you can substitute this for quinoa, brown rice or flatbread. A zesty Mediterranean salad will also work well with this dish. For dessert, serve your guest a cup of mint tea or sweet baklava with almonds.

The tips below are designed to give you an introduction to cooking with a tagine pot. If you look after your earthenware pot well, it will last for decades.

When cooking with a conical earthenware pot, the order in which you add your ingredients isn't too important. It's such a convenient method of cooking because the unique lid shape keeps all the ingredients moist, and everything cooks together. It's the ultimate item of kitchenware for the one-pot meal.

If you're using your cast iron or stoneware pot on the stovetop, which is the most common method of cooking for most recipes, be careful not to set the heat too high, as you may damage the pot (and also potentially burn your delicious Moroccan Chicken!) The best way to avoid any damage is to use some form of a diffuser, usually a thin metal plate, between the pot and the burner for protection.

The traditional pot also works well in the oven, but again, don't set it to an extremely high temperature. If you have unfinished cast iron or stoneware pot, you can also use it over a grill or a campfire, but keep the flame level low and cook for a little longer than you would on the stove.

Although cast iron pots are incredibly sturdy, they may become brittle when exposed to very sudden changes in temperature. After cooking, you should always allow your traditional pot to cool naturally on the stove, or on a heat resistant mat.

Don't place it on a cold counter or run cold water over it as you risk cracks developing. Similarly, don't put a cold tagine in a hot oven. Place it in the oven prior to switching it on, and let it come to cooking temperature gradually before adding your ingredients.

Other than Moroccan Chicken tagine, there are many other recipes to try. Other popular recipes from the region include Fish Chermoula, Harira soup and Tabbouleh.