Shell steak is also called strip steak and is delicious when marinated in a Korean BBQ style and grilled!

We all know Korean BBQ is delicious, and it's even more so when you can make this marinade for some home grilling. This recipe for shell steak in Korean BBQ marinade will have your mouth watering in anticipation!

We’ll teach you the key difference between strip and ribeye, temperature control and cooking time required to make a tender meat dish!

What is shell steak?

Shell steak is another name for strip steak. It's typically cut from cows' short loins and can easily absorb flavours from marinade. NY strip steak and Kansas are examples of shell steak.

Shell steak (New York strip) and ribeye are two popular cuts in the world of beef. Ribeyes have more internal marbling or fat which provides a buttery smooth texture with plenty of flavours to be had, while New York strips only feature one band - making it less tender than its rib-sporting cousin.

Strip steak doesn't have as much fat running through it so while still delicious, you'll want to make sure there's some seriously tasty seasoning hiding in that meat to get your mouth watering all over again.

Cooking it right will help to maintain its tenderness and juiciness as well as bring out its natural flavour. That being said, there are different temperatures for cooking this cut of beef depending on how you want to prepare it!

Beef prepared this way can be either rare, medium, or well done. The more firm the meat is, the more well done it is.

Here are two popular methods of preparing this cut of beef; using an oven or a cast-iron skillet.

For thinner cuts like strips, we recommend cooking this at 6 minutes per side at 450°F temperature for a total of 10-12 minutes. However, this will depend on how well done you want them. Remember to flip halfway through so both sides are cooked evenly!

Cooking meats such as beef can be difficult to get just right when using an oven because of the thickness of the meat and the temperature control required.

Therefore, for beginners, we suggest grilling these in a cast iron.

Using a cast-iron skillet is the best way to grill your strip steak. The skillet gives you more control over cooking, so there's no risk of overcooking or burning it. Plus, this method allows for even heating and a nice sear on the outside!

Cast iron is one of our favourite ways to cook meat because whatever comes out will be delicious every time! Grilling with cast iron gives an evenly cooked piece of meat like no other grills because of the even heat variance in the metal grids.

Preheat your cast-iron skillet and sear the meat for 3 minutes to form a crust. Turn and cook it for 2-3 more minutes to achieve a rare finish. For medium-rare, cook this for 3-4 minutes. Let the cooked meat rest after cooking them before serving, so they're juicier!

The key is to make sure you add some fat or butter in the skillet to baste it - this will help give your food more flavour and also keep fats from burning while they cook.

Here’s a quick guide on how to cook strip steak using a cast iron:

Take a look below for the full instructions on how to create this tasty dish! 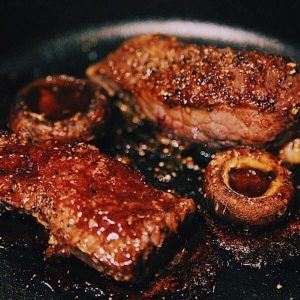 What to serve it with?

Traditionally shell steak is served with mashed potatoes, fries or a leafy salad.

For this Korean BBQ style dish, you can serve this over steamed white rice with a side of crunchy Korean pickled radish. Alternatively, you can also serve this dish with Kani salad for a tangy twist!