Tantanmen (or tan tan ramen) is the Japanese version of the Sichuan spicy noodle dish Dandanmian. It is made of ramen noodles served usually with ground meat and vegetables in a creamy yet spicy broth consisting of peanuts, sesame, and chilli ingredients.

This dish is probably lesser known than other noodle types like ramen, soba, or udon noodles. For us though, we see it as a bowl of goodness that warms our stomachs and more often than not heats up our bodies!

If you’re new to Japanese cuisine, you can refer to our full ramen guide to read more about the versatile Japanese noodle dish. Ramen is basically noodles made of wheat flour that’s cooked in broth and served with a variety of ingredients.

In this article, we will be introducing tantanmen that strictly speaking is another type of ramen. We will be talking about its history and variations, its nutritional value and caloric content, and finishing off with an easy recipe you can try at home!

What's In Its Name?

Tantanmen is Japan's version of Sichuan, China’s dandanmian (mian 麵 means noodles in Chinese so this is also called dan dan noodles) and was introduced to the Japanese society by a Sichuan-Japanese chef.

Before we dive into the Japanese version, let's start with its origins. If you’re wondering where it gets its name, it’s actually from danzi (擔子), which can be explained as a shoulder pole on which a person is carrying two loads. One side contains the raw ingredients and the other contains the equipment needed to cook and assemble the dish.

If you talk to a Sichuan local, the place where tantanmen was first conceptualized and peddled, chances are high that they will have fond memories of eating bowls upon bowls of dan dan noodles when they were kids. There are even news reports of celebrities who upon returning to their hometown would make it a point to have a bowl of these noodles.

The original and most common version of the Sichuan dandanmian does not serve it with soup and is instead dry. This makes sense because it would have been more complicated (and heavier) to carry tantanmen on the streets if it was sold with soup. It was only served with a sauce made from a mix of soy sauce, vinegar, and chilli oil.

Over the years, the soup variation was created. It consisted of boiling handmade noodles and adding these into a bowl of bean sprouts, green onions, chilli oil, soy sauce, and broth. In even later variations, toppings such as minced pork or dumplings were also used.

This means that whether you prefer to have your noodles dry, or if you’d much rather eat it with soup, both choices are available in many restaurants today.

Alternative to tantanmen, we also recommend trying “tsukemen” (dipping noodles) which is another type of ramen where the noodles are served separately from its soup. The soup is mostly seen as a dipping sauce so it will have a heavier taste. This means that you'll get to have both!

Now that we've talked about the Chinese version, it's time to bring our attention back to this post's main star - tantanmen.

What’s It Made Of?

We’ve talked about the common variations of the Chinese version and now we will break down the main components that go into the Japanese version.

Since it is normal for chefs to modify ingredients and flavour profiles to suit local tastes, and to put their own twist to a dish, that’s exactly what happened when this was first introduced in Japan.

The biggest change was the addition of milk and sesame paste to the soup base. This served to mellow out the spiciness from the chilli oil and to add an extra layer of creaminess. The Chinese dandanmian has a spicier taste, while the Japanese tantanmen has a nuttier and sweeter flavour.

Any type of noodles can be used, be it ramen, oolong, or even udon noodles. The most suitable type to use is wheat-based as this will best achieve the texture and chewiness needed for this tan tan ramen dish.

It is important to note however that we’ve even seen people who’ve made tantanmen using vermicelli noodles. Personally, we've never tried it and we would still recommend using wheat-based noodles especially if it's your first time cooking it at home, but it’s really up to you.

Store-bought ones are readily available, but you can also easily prepare your own at home. Just mix ginger, garlic, green onion, roasted sesame oil, and pepper/chilli together and you have your own chilli oil.

Typically, unsweetened soy milk is used. The milk gives the tantanmen soup base a creamier consistency. Almond milk is also a good alternative if you’re looking for a less creamy consistency and a slightly sweeter taste.

If you can get your hands on Japanese sake (Japanese rice wine), that would be ideal. However, any type of cooking wine or dry white wine can also be used as substitute.

Some of the add-ons or variations from restaurants that we’ve seen are the following:

A sprinkle of minced pork is added mostly as a garnish and also as a source of protein. Some restaurants would have a more generous serving of minced pork or even larger slices of diced pork to their tantanmen bowl.

An easy way to keep the dish vegan is by using any type of vegan meat. In London, Linda McCartney Foods offers vegemince, which is made from rehydrated textured soy protein.

There are many vegetables to choose from. The most common ones used are bean sprouts, zha cai (榨菜) which is a pickled mustard root common in Chinese cuisine, or bok choy.

Other substitutes are white cabbage or spinach. We’ve also tried ones that have wood ear mushroom for a different colour and extra vitamins and minerals.

If you’ve ever had ramen, you’d know what ramen egg is. It’s a soft-boiled egg marinated in the sauce where the yolk is usually super runny but sometimes could also be firm and custard-like.

We’ve seen some restaurants who serve their tantanmen with ramen egg and that makes it even more delicious and satisfying!

These are usually used as garnishes and as added texture to the dish. Nori seaweed is particularly popular in Japan due to its added umami taste as well as its health benefits.

In general, tan tan ramen is packed with nutrients because of the ingredients. You have noodles, meat, and vegetables. Noodles are rich in carbohydrates, which is important in providing energy to get through a busy day.

If the tantanmen noodles are made of durum wheat, then they will contain vitamin B which is not only good for heart health but also good for digestion.

Meat is rich in protein and iron, and vegetables are also filled with different vitamins and minerals. Soy milk will also have protein and calcium and all these ingredients help nourish our bodies.

A word of warning though, a typical bowl of about 400g would set you back about 600kcal. The calories would be higher depending on the toppings, the contents of the soup base, and the serving size. It’s highly possible to consume more than 1,000kcal in just one sitting!

Where To Eat Tan Tan Ramen?

Across Asia, there are multiple restaurants with their own versions of this tan tan ramen dish. There are restaurants whose menu consists of only this one dish, and of course, there are those where you can get a sampling of other Japanese dishes as well.

You can easily try this not only in China but also in Hong Kong, Singapore, Taiwan, or the Philippines. A popular place that we recommend in Taiwan and that’s been around for more than 70 years is 老鄧 Lao Deng 1949. They have a variation where you can substitute sesame paste and crushed peanuts with soybean paste instead.

In the Philippines, Mendokoro Ramenba is also famed for its version. There’s usually a long wait before you get seated. We stumbled across the homemade tantanmen Pinoy (Filipino) recipe from Pepper.ph, which is also quick and easy to make.

In Japan, there are also loads of restaurants to choose from. Examples are a chain of restaurants called New Tantanmen in Tokyo, Tantan in Kyoto, and King Ken in Hiroshima.

There is also a slew of ramen restaurants outside Asia, especially since Asian cuisine has been well-received over the years. In London, a popular restaurant chain where you can get your fix of this dish (as well as other ramen types) is Bone Daddies.

Can you prepare it in advance?

The answer is yes! It’s easy to prepare tan tan ramen at home once you have all the ingredients. The soup paste and the pork can be cooked and prepared at least 2-3 days in advance and kept in the fridge.

The soup stock and vegetables, as well as any other toppings or add-ons, will have to be cooked on the day that you want to eat it.

There are numerous recipes online with personal and interesting takes on this dish. Just One Cookbook’s black sesame tantanmen is one such example.

Here, we are sharing a simple and straightforward recipe that can easily be recreated at home. Let us know if you try it and what you think of it. Enjoy! 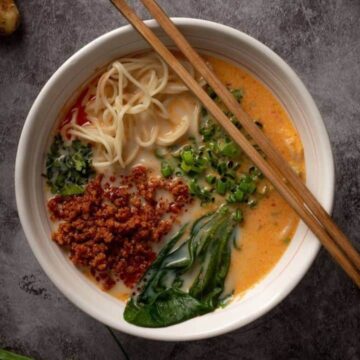 You may also refer to papadesuyo777’s video on how he made his version of tan tan ramen dish using miso-flavoured minced pork.