Taro ice cream is a three-ingredient dessert recipe that you can make at home without needing an ice cream maker. The natural sweetness of the root vegetable when blended with sweetened coconut milk makes for a tantalising treat that will have you reaching for a spoon!

Our traditional recipe will not only impress but as a 30-minute no-churn recipe that does not require any special equipment, who wouldn’t want a go at it?

As the name implies, it is a traditional Asian ice cream dessert that highlights taro as its main ingredient. Eaten just like any frozen dessert, the umami-filled starch of the taro root adds a depth of flavour to this dessert’s flavour.

The taro root which is also known as ‘Satoimo’ in Japanese or ‘Gabi’ in Tagalog, is a root vegetable native in Asia and India. Often called the ‘potato of the tropics’, the ingredient is commonly found as a flavouring for boba milk tea, fillings for pastries and pies, or a staple ingredient in most Southeast Asian desserts like Sago or Halo-halo.

This flavour of this particular soft serve is mildly sweet with hints of nuttiness and starchiness from this root vegetable. In addition, the dessert has a great sense of creaminess and fattiness from the whipped creamer.

Compared to another Filipino favourite purple ingredient ‘ube’, when ‘gabi’ is freshly cut, it is white in colour. However, once blended or chopped, the vegetable will oxidize into a pale purple or almost violet-grey colour.

To make it look more attractive, most shops commercialize their ice milk by colouring it a soft purple or using its flavoured powder which is already purple in colour. This is so it will attract their customers to try their peculiar purple taro ice cream.

Many people mistake gabi and ube as the same thing root vegetable due to their close similarities. However, taro and ube ice cream are vastly different in terms of appearance and flavour.

With ube, the sweet treat is naturally coloured with its deep purple colour and holds a rich taste of vanilla.

On the other hand, taro has a taste that is nuttier and starchier, like a different form of sweet potato. As mentioned, the soft purple hue only appears after oxidation occurs from cooking the root vegetable. Even then, taro ice cream’s purple colour is less vibrant in comparison to the ube version.

Sweet potato is another popular ingredient used to make chilled treats. Similarly, it is often misplaced as being the same food menu item as its ‘satoimo’ counterpart. This is mainly due to both desserts being sweet and starchy at the same time.

The difference between taro and sweet potato frozen soft treats however are the ingredients used in the making process.

The end result of basic taro ice cream is a fresh representation of the vegetable itself. With nothing much changing in terms of flavour, it's like eating a chilled piece of satoimo!

Sweet potato soft serves, however, most commonly is made with additional spices like ground nutmeg or cinnamon to compliment the taste. This results in a not so accurate representation of sweet potato on its own.

To make the distinction clear, many restaurants and manufacturers like to prepare the sweet potato version with additional colouring. Oftentimes, the sweet potato glacé will appear bright orange-yellow.

Though this particular recipe is not exactly top priority in a list of healthy desserts as it does contain around 300 calories per serving, a little guilty pleasure wouldn’t hurt!

However, the cooked root vegetable on its own holds many proven health benefits.

The fresh root vegetable and its flavoured products are commonly found in the tropical or subtropical regions of South Asia and East Asia like Taiwan or the Philippines.

Anywhere else, you can most commonly find the fresh root vegetable, taro ice cream or even its powder version in any local Asian supermarkets.

The cold dessert is perfect on its own! However, many have taken upon the challenge to up their frozen dessert game by incorporating it with other desserts like;

There are only 3 ingredients found in our recipe. They are fresh taro, condensed milk, and heavy creamer.

Although, you can always substitute these ingredients with alternatives to make your own vegan taro ice cream. Vegan substitutes for heavy cream is a cashew creamer, while condensed milk can be replaced with coconut-based condensed milk.

Before getting into the recipe, you need to know just how important it is that you pick and handle the starch vegetable properly. Picking an unripe and hard root can result in your sweet dessert tasting bland and gritty instead.

So, in order to get the most out of the vegetable,

How to make from scratch

It is not common for one to pick up an ice cream recipe on a random Saturday what with all the prep and all that’s usually required. Making frozen desserts sure seems to be on the bottom of everyone’s list for a quick and easy sugar fix.

However, with this no-churn method, not only do we show you how to make taro ice cream so easily, but also prove to you that making this frozen dessert is as easy as making coffee in the morning!

Most recipes require an actual ice cream maker or an immersion blender. In contrast, our trusted recipe only needs a standard blender and at most, a hand mixer! With just a simple series of boiling, blending, and freezing steps, you’ve got a delectable dessert to enjoy with all. 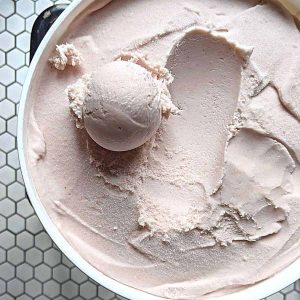 Yummy Teh Recipes on Youtube made a helpful video recipe on how to make this sweet dessert. They added vanilla extract in their recipe to combine a bit of vanilla flavour in their gabi dessert.

How to make from powder?

In some places, obtaining fresh root vegetables can be quite difficult. That is why many have depended on using the powdered version instead. Contained in a small bottle, powdered taro gives the same taste as a fresh one with an added long shelf life.

For how to make taro ice cream with taro powder, you will need an ice cream maker. Simply combine heavy creamer, milk, eggs, sugar and the flavoured powder. Then, let the machine do its magic!

Did you try making your own taro dessert at home? Share with us a photo by tagging us on Instagram @honestfoodtalks!

« How Long Does Salmon Last in the Fridge?
How to Use a Hot Plate for Cooking? »