Vegan choux pastry is the vegan-friendly version of one of the most versatile pastries out there. The traditional choux can be filled with cream, fruit or chocolate. Moreover, these are perfect as a dessert or an afternoon tea snack.

This post will teach you how to make vegan choux pastry from scratch as taught by Ms Tully Zander from Vegans First. She uses ingredients like vegan butter, plant-based milk and Just Egg instead of the typical dairy baking ingredients. It's easier than you think and the end result tastes delicious!

What is Choux Pastry?

You may also find people calling it a "cream puff pastry," which I believe does injustice to this delectable sweet package of flavors. You ought to mention choux in the name to give an appropriate credit where it is due.

How to make without eggs

I almost gave up, thinking eggless choux pastry was only a dream, but I persisted! “Vegan choux pastry recipes are practically non-existent! Once I found out about Just Egg’s revamped formula that can be applied to more baking recipes, I experimented with using it in a choux pastry. This was my first time having a cream puff since being vegan.

The most challenging part of making this delicious vegan recipe is replacing the eggs. I recently discovered that Just Egg had a revamped formula that is suitable to be applied to more baking recipes. I tried this store-bought egg replacer "Just Egg," and with a few more other ingredients, I made this delicious Vegan Choux Pastry.  Don’t worry; it’s very simple!

These egg-less pastries aren’t quite as fluffy and light as the mainstream egg-filled pastries, but I believe you would hardly be able to tell any difference. 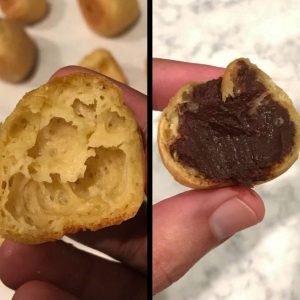 Finally! An eggless, vegan recipe for choux pastry that genuinely works! I’m sure this recipe could also be used for eclair shells.

How did your pastry turn out? Share with us your photos by tagging us on Instagram @honestfoodtalks!

Looking for other snacks and desserts which are vegan friendly? Check out our vegan-friendly Coffee Jelly recipe as well as our no-churn Taro Ice Cream recipe!