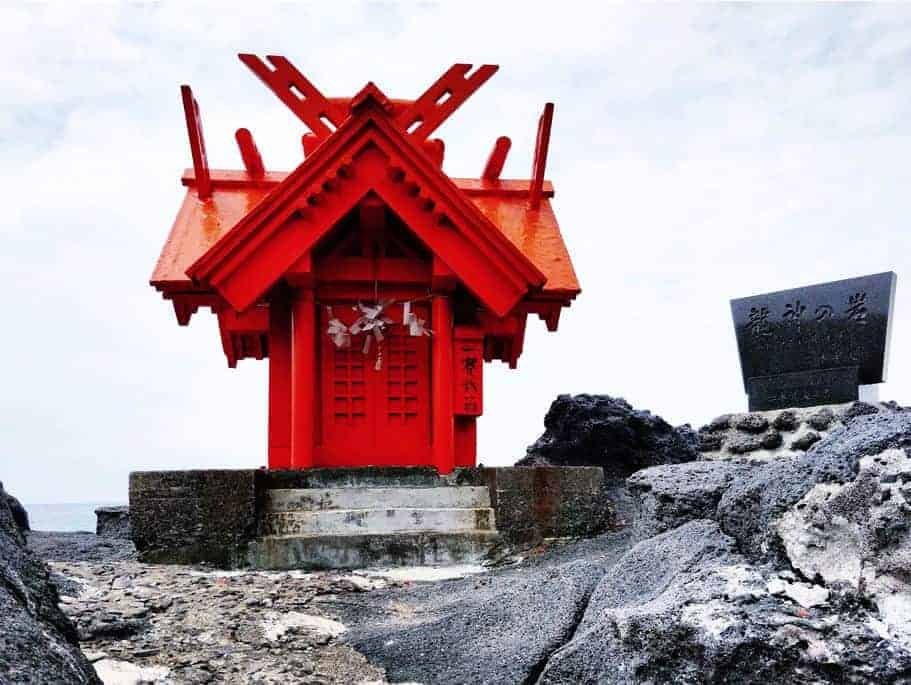 Find out what it’s really like to embark on a crazy 10 hour road trip for Japan’s most remote bowl of ramen as well as what to do in Wakkanai, Rishiri and Rebun Island, Hokkaido.

Long famed for nutrient-rich kelp within Japan, Rishiri Island off the coast of Wakkanai, Hokkaido was made famous to international tourists after a video produced by Great Big Story went viral on social media during early 2019.

In this video, the American film crew travelled 10 hours from Tokyo to Risihiri Island to try a bowl of ramen from Miraku Ramen, a family-run ramen restaurant in Hokkaido. But does it really taste that good and is it worth the trek?

As one of my last road trips in Hokkaido, I visited the northernmost tip of Hokkaido; Wakkanai and the two neighbouring islands Rishiri and Rebun. Rishiri Rebun is part of the Sarobetsu National Park. After hearing about Miraku Ramen and doing some research in the local language, I knew I had to visit this restaurant and the two islands.

Having spent over a year in Japan and visited countless ramen restaurants across the country, a place that was considered to be the best ramen restaurant caught my attention.

Along with three good friends, I embarked on another spontaneous trip but this time for one bowl of ramen located 497km away and approximately 8 hours 30 minutes by car and ferry.

We decided it would be too tiring to make the full journey without stops in between. Our plan was to stay over in Sapporo city for the night, head off early in the morning and change drivers throughout the rest of the journey.

We aimed to reach the remote island for the ramen restaurant’s 11:30am opening. The noodle house is open for only two hours and 30 minutes every day so we wanted to make sure we definitely were on time. Otherwise, this entire trip would be an absolute fail.

But like any seemingly well thought out plan, something will inevitably go wrong.

Travelling from Niseko (a small ski town in the south of Hokkaido), we were off to a bad start as the weather forecast predicted strong winds travelling at more than 65km/ph over the next few days.

Some locals even warned us about going on this trip. Ferries are likely to not operate during severe weather conditions or worse – there would be no returning ferries coming back from the two remote islands for a few days. Earlier in 2018, ferries from Wakkanai to Rishiri and Rebun did not operate for more than 5 days leaving travellers stranded on the remote islands.

Hokkaido has had a bad year in general with a 4.3 magnitude earthquake, several typhoons and two snowstorms – but living in Japan, you get used to it.

Nonetheless, we started the journey from Niseko, after work at 6pm. Setting off in a small suzuki car, the four of us made our way to Sapporo to join another two friends for dinner. This part of the journey took just under two hours before we reached Toriton, a conveyor belt sushi restaurant around 8pm.

After dinner, we made the decision to continue the journey rather than staying over in the city. We were energetic and thought it would save us time and money. With two bags of tasty Japanese snacks (a selection of Pino and Jagatakun potato chips) bought from Lawson, we head north.

However, unlike Sapporo where Google Maps works well to show traffic and road closures, it didn’t show the main highway towards Wakkanai to be closed off at night. This was due to continuing roadworks between 11pm and 5am until late 2020. This information is not readily available in English so it’s worth factoring in if you’re planning to use the highway at night.

Taking a detour extended the journey by 40 minutes or so.

Driving through rural parts of Hokkaido during the night can be quite relaxing but also dangerous. Quite often, it is pitch black with no other passing cars for miles. When there is, passing cars are often speeding pass 80m/ph or higher.

There’s also a high chance of encountering foxes, tanuki and wild deers if you’re driving through the mountains. Wild animals don’t look before they cross the roads. Rescue operations in Hokkaido are often slow and unreliable.

A mid June morning in the north of Japan, Hokkaido is still quite cold. We stop off for some canned coffee at Teshio district and stretch our legs. Only two hours left to Wakkanai, Hokkaido.

Around 6am, we reached the Wakkanai ferry terminal, park up and take a quick nap.

Ferries toward to Rishiri and Rebun Island operate only three times a day and cost 6000 yen to hop between islands on the day. The ferry ride from Wakkanai to Rishiri Island takes roughly 1 hour and 40 minutes, sometimes slower depending on weather conditions.

Miraku Ramen is located 13km away from the Rishiri ferry terminal, Oshidomari. Public transport on the remote island operates infrequently. From the ferry terminal, you can take a single taxi ride to the ramen shop for 3,000 yen.

The locals on the island speak little to zero English but as Miraku Ramen is a popular destination, most taxi drivers will understand where to take you if you show them the restaurant’s name in Japanese, 利尻らーめん味楽 本店.

We worked out it would be cheaper to rent a car rather than a taxi as the car rental was 5,000 yen for 5 hours. Exiting the Oshidomari ferry terminal, there are several car rental stores. Usually unmanned, you will have to ask the neighboring shop owners to call for an individual to come down to the store. The paperwork is fairly easy to fill out and the dealers will accept International Drivers Permit (IDP).

Another option is to cycle there. Cycling around Rishiri Rebun Island would be a good option during the hotter months in July and August.

A small remote island with a circumference of roughly 60 kilometers. The island’s dormant volcano, Mount Rishiri sits at the centre.

Climbing Mount Rishiri is a popular activity for tourists in the summer. The volcano is 1721 metres tall and is considered a challenging hike, taking roughly 12 hours to complete. Those attempting to hike Mount Rishiri should stay overnight on the island. Camping is also a good option in the warmer months.

An easier and quicker hike would be Cape Peshi which offers a good view of Mount Rishiri from afar and Oshidomari ferry terminal.

Ryujin no Iwa (龍神の岩) is a small shrine located at the coast of the small remote island. Ryujin no Iwa loosely translates to Dragon God’s Rock. The shrine is said to be built by sailors who survived a crash at sea.

Known for its mountain flowers, Rebun Island offers scenic hikes in the summer season. The best time to visit Rebun Island would be in July and August. During these months, it is still relatively cool and not too hot to ascend the mountains.

Rebun Island offers more than five hiking routes of varying difficulties. As we visited during the middle of June, it was a fairly cold misty hike and the flowers were not in full bloom.

We returned on the day from the islands and spent the next day in Wakkanai, Hokkaido. There are only a few accommodations such as Rishiri Island Hotel on the two remote islands. These are more expensive than those on Wakkanai. There was also a risk of ferries not operating the next day due to the severe weather.

There are a few points of interest in Hokkaido, and Wakkanai has one of the most interesting ones; Cape Soya, the much-disputed Northernmost Point in Japan.

Other points of interest in Wakkanai include Wakkanai North Port Breakwater Dome and The Soya Footpath. Our visit in June was accompanied by strong winds of 65km/ph. As a result, the gloomy overcast meant a lot of the outdoor attractions were not as picturesque.

In hindsight, we would highly advise against traveling to Wakkanai, Rishiri and Rebun Island during late May and early June due to unpredictable Wakkanai weather conditions.

Was it worth it?

The journey totaled 25,000 yen per person and would probably cost a lot more for couples or solo travellers. Road signs are in English, Japanese and Russian on Wakkanai which makes it easy to navigate around. However, most locals on Rishiri, Rebun and Wakkanai only speak Japanese.

This crazy road trip took us 10 hours to complete with a detour at the beginning, a long ferry wait and sorting out the rental car at the Oshidomari ferry terminal. We were pretty fast and left ourselves quite a bit of leeway but it could’ve taken longer if we got lost on the islands.

Although ramen at Rishiri island Miraku was 880 yen, considering the overall cost of the trip; it’s one pretty expensive bowl of ramen. Despite this, it was definitely the best ramen I’ve had to date. If you like ramen, hiking and the outdoors in general; exploring Wakkanai, Rishiri and Rebun island is a road trip to go on in Hokkaido.

For those with less time and money but still would like to try arguably the best ramen in the world, you have two options.

Option 1
Head towards Shin Yokohama Ramen Museum, located in Yokohama, Japan which is only 30 minutes away from central Tokyo. In 2017, Rishiri Ramen Miraku opened a second store in mainland Japan which is more accessible than the main restaurant on the remote island.

Option 2
Rishiri Ramen Miraku has its own instant noodle package which they deliver across Japan.

Traveling 10 hours for one bowl of ramen is at the top of my list for one of the craziest things I’ve done for food. Would I do it again? Probably not. But my good friends and that delicious bowl of ramen made it all worth it.

Read Next: Best Ramen in the World, Rishiri Ramen Miraku

Editor at Honest Food Talks. Combining her passion for food, languages, and adventure, she has travelled to some of Asia's most rural locations. She will order the weirdest sounding dish on the menu (and will do a lot in the name of food!). A polyglot, snowboarder and gourmet lover at heart.

An Dining, a Farm to Fork Concept Restaurant