A Japanese KFC rice recipe has surfaced on the internet and began trending on Twitter. People started putting KFC chicken pieces into a rice cooker and absolutely loved the outcome! Like always, we tried out the internet hype so you didn’t have to. But where did all this start? Find out how to make KFC chicken rice and if it's really worth the hype.

KFC in Japan enjoys a surge in sales during the Christmas season due to a successful marketing campaign in 1974. At the time, it was difficult for foreigners to buy a turkey in Japanese supermarkets for Christmas. With a growing interest in traditional western Christmas dinner in Japan, marketers saw it as an opportunity to capitalize on this. Watch the Japanese Christmas commercial from 1989 below.

Takeshi Okwara, who later became the CEO of Kentucky Fried Chicken Japan claims credit for coming up with the idea. You can read more about the origin story here. Since then, KFC has been strongly associated with the Christmas holidays, cementing its seat in Japan’s fast-food industry.

But let’s get back to the Japanese KFC chicken and rice recipe. It does sound strange to cook KFC in a rice cooker for a few reasons. First of all, its the association most people have with a rice cooker. Typically, Asian households will use a rice cooker for cooking rice or congee to go alongside other Asian dishes. Secondly, putting something that’s cooked (KFC) with something that’s raw (rice) doesn’t seem like the latter will cook properly. Finally, KFC uses spices like black pepper and paprika which you usually wouldn’t find in large quantities any Asian rice dishes.

Despite our doubts, we gave it a try and we’re glad we did. We can confirm, this Japanese rice cooker hack is legit. Finally, KFC rice at home is no longer a dream. Here’s one of the best chicken and rice recipe & our review. 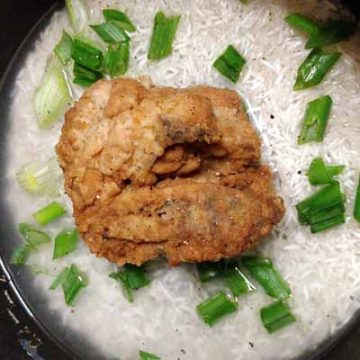 Straight out of the rice cooker, that familiar smell of KFC comes wafting in the air. The chicken is a lot more tender and moist after being cooked for the second time in a rice cooker. In addition, the rice absorbs the flavours from the chicken stock and KFC chicken, adding to its natural aroma. Definitely, an easy way to cook up a delicious dinner at home!

Looking for more easy recipes with rice and chicken? Try our 5 step Singaporean chicken rice dish. Guaranteed to be equally as tasty and perhaps a little healthier.