Injeolmi is a traditional Korean sweet rice cake that’s seen a boost in popularity in recent years! Making these chewy, nutty little snacks isn’t too tricky at home. Besides, these classic Korean treats make a wonderful bite for you to have as a midday snack in the office or while you watch K-drama at home!

We’ve gone through a lot of information online and packaged all you need to know about the Korean dduk in this article. By the end of it, you’ll not only know the ins and outs of this treat, but also how to make them in your home kitchen!

Injeolmi (인절미) is a traditional Korean snack that is basically a type of sweet glutinous rice cake. Cooks usually coat the sticky cake base with a variety of grounded beans and nuts, or gomul in the Korean language. Within Asian cuisine, they are categorically a variety of dduk or tteok, which refers to Korean rice cakes.

Typically, cooks make these cakes by steaming and pounding glutinous rice flour. Once they reach a certain smooth yet sticky consistency, they then cut them into bite-size portions before finally coated with gomul.

The most representative gomul used is roasted soybean powder. However, just as Koreans love their different types of beans and grains as seen in their Misugaru drink, they are many coating varieties for the rice cake. For example, black sesame, adzuki red beans and chestnuts are also common.

The thing that separates this Korean cake from others, such as bento cake, is the chewiness and stickiness of the cake. The gluten in the flour is responsible! Gluten, when worked, becomes very sticky, and carbohydrates in the rice become sweet when worked in the same way. Therefore, the cakes are sweet and sticky, rather than dry and crisp.

In Korea, you will often find these cakes at a couple’s wedding ceremony. The happy couple will eat the cake, and tell one another that they hope to stick together forever, just as the sticky rice cakes stick to one another. Cute!

Even in modern-day today, many Koreans love their national treat, injeolmi. Many restaurants and cafes use the base flavour of this treat and apply it to more modern desserts such as ice creams, cakes and pastries!

Outside of the kitchen, the creamy and light brown colour of the snack is so popular that you will find many Korean naming their pets with the same colour, “Injeolmi”!

How is it made?

These cakes are made by cooking the tteok dough and then pounding it to achieve the right consistency. Traditionally, the woman of the house would make the dough and pound it in a pestle and mortar for a long time. It symbolises her hope that her daughter would get on well with her new husband’s family.

Stories often recount that the pounding took so long that many people would take turns doing the work. Often, men would help in the kitchen to pound the dough thanks to them generally being quite strong.

The tteok dough is cooked before being pounded. So, when it’s at the right consistency, cooks will simply toss the dough in soybean powder before chopping it into portion-sized pieces and served.

The main difference between injeolmi vs kinako mochi is the coating variety of the treats. The Korean version has variety in terms of using other types of coating such as black sesame and chestnut. Meanwhile, Japanese kinako mochi specifically refers to using only soybean powder as the coating of the rice cake.

Aside from that small difference, the production method is much the same, leading to an extremely similar snack. Both the rice cake treats are made from glutinous rice flour, sugar, and water, and coated with roasted soybean powder.

This is an interesting example where two neighbouring cultures with the same ingredients prepare the same dish!

Injeolmi is considered a healthy traditional snack as it is very nutritionally dense.

However, glutinous rice has a lot of carbohydrates in it, which convert to sugars in your digestive system very easily. For this reason, you should be careful to control how much of this dessert you consume as it is dense in calories!

Because of how simple and tasty this Korean snack is, many recipes out there have adapted injeolmi into wonderful versions of the original.

First of all, we have injeolmi bingsu. This is a type of shaved milk ice dessert that’s similar to a snow cone. However, you will find that the portion is usually large and is best for sharing. It is topped with either soybean powder or small pieces of the snack cake itself.

Waffles are another popular adaptation of the classic. They are made by pressing portions of the cake in a waffle maker, which cooks the treat until it’s crispy and delightful. In addition, it typically has toppings such as honey, fresh fruit or even ice cream to taste!

Injeolmi Toast is a dessert that is essentially rice cakes sandwiched between slices of beautifully milk bread toasts. There is typically honey inside, and the combination of crispy and soft textures is delightful!

Finally, we come to injeolmi doughnuts - a sweet treat that pairs the texture of a doughnut with the flavour of sweet rice cakes. These doughnuts are typically basic yeasted doughnuts that are cooked to perfection before being tossed in soybean powder to give them that classic taste infusion.

There are four ingredients in this injeolmi recipe in total, but only two that we want to talk about here.

Glutinous rice flour is really important for this recipe. The gluten within it contributes to both the flavour and the texture of the final dish.

Today, you can conveniently find it on Amazon. Otherwise, we would recommend heading to an Asian supermarket to find it, as more general supermarkets are unlikely to stock it.

Roasted soybean powder adds to both the flavour and utility in this recipe. It has a nutty flavour that’s representative of injeolmi. In addition, it also helps to prevent the snack from sticking to one another during preparation. By comparison, think of the role that icing sugar plays with Turkish delight!

You can get this gomul by ordering it online for home delivery. Alternatively, we would recommend heading to an Asian grocery store for this - it’s unlikely a general supermarket would stock it.

The only ingredients in this recipe that you might need to substitute are soybean powder and sweet rice flour.

You can replace the soybean powder with another nutty coating. For example, black sesame or red bean powder are common gomul coatings that you can use to make injeolmi.

You can store the snack in the fridge, in an airtight container to extend its life a little. You can keep it for consumption for 3-5 days.

When you remove them from the fridge, microwave the treats for a few seconds to warm them up. 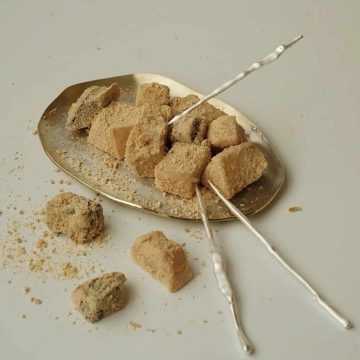 Wondering how the whole process looks like? We recommend watching Home Sweet YOU 유혜영 video recipe below on how she prepares the traditional Korean snack at home.

We hope you’ve been able to learn about how to make this awesome K-snack! If you tried making it, be sure to post a photo and tag us on Instagram @honestfoodtalks!