Inkigayo sandwich is a Korean snack that any K-pop fan would certainly know about if they are asked. Originated from the canteen of SBS, Korea’s national television broadcast centre, the K-pop sandwich has held its name for being one of the most unique sandwiches.

Though, is that really the only reason? In this article, the true secret of why this specific Korean sandwich has been brought to light by many of your favourite idols will be revealed. You will also learn how you can make the perfect inkigayo sandwich using our recipe.

This Kpop treat is a three-layered sandwich consisting of cabbage slaw, potato salad, and peculiarly, strawberry jam. It has piqued the interest of both K-pop fans and foodies alike.

Not only has it got two sandwiches combined into one, but the inclusion of strawberry jam makes it very special. Surprisingly, the sweet jam brings out the flavour of the savoury salads, complementing each other perfectly.

Where to buy inkigayo sandwich?

The snack has spread to almost all convenience stores such as Family Mart. The snack can be found all over Korea and in other overseas countries like Singapore.

As the K-wave continuous to hit the shores of other Asian and Western countries, the popularity of this Kpop sandwich continuous to grow. For places where they are not sold in stores, there has been a surge of people searching for home recipes to make the sweet and savoury treat at home.

If you’re still not convinced, there is no other way than to try it for yourself by making and saving our inkigayo sandwich recipe!

The story behind its popularity

The specially made meal was first introduced when the SBS cafeteria owner at Inkigayo thought of making a staff only food item. This menu was exclusively for their Kpop stars as a way to provide a quick meal in between shows.

What they didn’t expect, however, was how much they would really enjoy them. Many idols such as Jennie (BLACKPINK) and Kai (EXO Group) have been caught eating the inkigayo sandwich in and out of the studio. Other also include popular groups such as;

Did you know: Since the original snack was only made at SBS Inkigayo, they were in such high demand in 2019 that there was a 3-month waiting list! Now, we see more and more netizens on forums such as Reddit discussing the wondrous Kpop snack online.

The Korean sandwich made its comeback when BIGBANG star, Seungri revealed the secret as to why it did so well in the cafeteria. He stated that fellow idols would use the inkigayo sandwich as an excuse to hand out phone numbers or notes to other fellow K-pop artists as a show of interest.

As any form of romantic relationship is prohibited in the K-pop industry, they would sneakily insert a small piece of paper in between the saran or cling wrap that covers the treat as to not make it look so suspicious. So, as the receiver opens its wrapping, they are met with a discreet little note from their admirer.

Though Seungri claimed it himself that he does not have his own scandalous story with the inkigayo sandwich before, another couple were caught in the light for using the same technique.

Circling around Reddit, EXO group member, Kai had been caught using the snack to catch the eye of a particular BLACKPINK member, Jennie. Many believe that that was the reason they started dating because wouldn’t that be the cutest love story ever?!

So, who wouldn’t try to make the Korean snack that brought two of our favourite Kpop stars together?

The key ingredients used to make the inkigayo sandwich are;

Can I use any type of bread?

You are free to choose whatever bread you desire. Though, it is preferable to use white loaf bread as it does not disrupt the taste and texture of the snack.

White bread also helps in the factor when you let the prepared snack rest for 10 minutes to really help absorb the moisture of the ingredients. Therefore, making the inkigayo sandwich feel more intact, and firm.

What if I cannot find Japanese mayonnaise near me?

Japanese mayonnaise can be commonly found in an Asian supermarket. They come in various brands and flavours to suit your tastebuds. We recommend using the Kewpie brand which is used in many Japanese roll and crab salad recipes.

Though if you are not able to get hold of Japanese mayonnaise, regular mayo would do just fine.

I don’t eat meat, what can I substitute imitation crab with?

Since imitation crab is not suitable for both vegans and vegetarians, a good substitute for inkigayo sandwich would be shredded jackfruit. You can either sauté or steam your jackfruit beforehand and toss them into the salad.

For other seafood substitutes, Reddit has a wide range of vegan alternatives to add to your K-pop sandwich. We recommend asking the subreddit r/kpoppers if you have any further questions too!

It is easier to construct the inkigayo sandwich than you think. With only a few ingredients, you can make your own K-pop sandwich at home in less than an hour!

The key to making it as flavourful as possible is to press and leave the snack alone in the saran wrap for approximately 10 minutes before serving.

You can press the bread together with either your palm or the back of a heavy plate. This helps incorporate all the fillings together, so you are left satisfied after every bite and not in a mess of cabbage and potato salad going everywhere.

It is also preferable to let it rest in the refrigerator as it is best served cold.

Be sure to share it with your family and friends because everyone needs to try this once in their life! 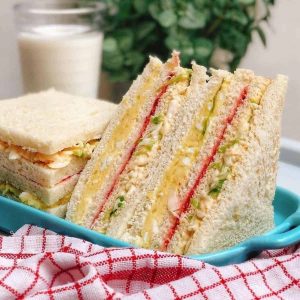 For the potato and egg salad filling

For the cabbage slaw filling

If you prefer to watch how the whole process, you can refer to Teh Maya’s Youtube video on how she prepared this Korean snack.

Would you try the K-pop dating snack? And would you follow in Kai’s footsteps and create your own love story?

Share with us a photo of your homemade sandwich by posting on Instagram and tagging @honestfoodtalks! We would love to see it! ❤️

Still looking to fulfil your craving for Korean treats? Check out our recipes on how to make famous Korean street foods such as Fried Corn Dog and Fried Seaweed Rolls!