Shrimp chow mein is a convenient toss-up of pan-fried egg noodles, shrimp, and plenty of veggies stir-fried in a pan. It is a beloved go-to dish of most Asian home cooks. Learn how to cook this delicious Cantonese noodle dish as we explore the origins, ingredients, and easy variations.

Chow Mein originated in North China, from a city known as Taishan. It has travelled with Chinese immigrants all over the world and evolved into different versions, as cooks add their flair and style to the dish.

We can see this dish appearing on menus in Asian restaurants around the world, including Japan, India, and even in the United States as well as in the United Kingdom.

Traditional Cantonese-style shrimp chow mein is created with egg noodles. The chef boils and strains the noodles. After which, the noodles are either pan-fried or cooked directly with soy sauce.

For the Cantonese version, the egg noodles are steamed, stir-fried, and finally pressed to sit at the bottom of the wok. This crisps the noodles at the edges and underside. The dry, crispy chow mein noodles act as a base to soak up the broth-like sauce.

The other version is typically just referred to as shrimp chow mein. It is directly cooked with soy sauce and stir-fried. The noodles are not purposefully pan-fried to achieve a crispy bottom. However, this version is usually more flavourful as the noodles have been well incorporated with the sauce.

The Guyanese in Africa have put their spin on this dish as well. They have adapted this traditional Cantonese noodle dish by adding a local spice, cassareep, which is the juice of the cassava root. To make shrimp chow mein Guyanese style, we add a tablespoon of cassareep, a thin black sauce made from cassava root to the traditional noodle recipe.

Some people may like their noodles with a softer texture. Shrimp lo mein is wet noodles tossed together with shrimp and other ingredients. The word “lo” in Chinese means toss. In many shrimp lo mein recipes, the egg noodles are first steamed. Then they are drenched with a mixture of dark and light soy sauce.

The noodles are also different; lo mein are thicker and less springy compared to the thin ones used for the fried version. After the dish is stir-fried, we need to add a sizable amount of soy sauce to give the noodle dish a wet, almost sticky consistency.

According to Myfitnesspal, a calorie-tracker app, fried chow mein contains 262 calories, which requires 1.6 hours of cleaning or 26 minutes of running. Since egg noodles are a form of carbohydrates, a large portion of the dish is high in calories.

Opting to cook the chow mein with low-calorie oil such as olive oil makes it a healthier choice.

Shrimp chow mein is traditionally cooked with thin Hong Kong egg noodles, which are made of wheat flour with egg added. This can be found in Asian supermarkets, with packets usually labelled as “Hong Kong-style pan-fried noodles” or sometimes “chow mein”.  They are usually already parboiled, and once the packet is opened, we can go ahead to stir fry them after loosening them in boiling water.

Another method is to cook the ingredients with thin, ramen-like yakisoba. Yakisoba is a Japanese variation of the original Cantonese noodle dish. Unlike the original Chinese version, soba is tossed into the wok together with its ingredients and stir-fried.

Udon noodles may also be used to make a stir-fry dish like yakisoba. The yaki udon noodles dish is a popular alternative for those who prefer wheat-based noodles rather than the buckwheat soba.

Whether we use egg noodles or yakisoba, most recipes will soften the side dishes with a little soda bicarbonate. Once they are ready, the shrimp or meat is then stir-fried with a light sauce.

This sauce is usually created from garlic, soy sauce, rice wine, light stock, flavour enhancer (MSG), salt, as well as oyster sauce, combined to give that sweet, bitter-burnt flavour. We can add different types of meat, although commonly seen in Asian restaurants are shrimp, chicken, and beef.

How to make it Vegetarian

To create a vegetarian version of the shrimp chow mein, we can exclude the shrimps and meats. Add more onions, a half cup of carrots, and two cups of shredded cabbage. We can also include scallions or shallot stems.

How to make it Vegan

For vegans, look out for noodles made only from wheat, water, salt, and oil.  Most noodle types are made without eggs, but it is better to check the ingredient list.

Instead of oyster sauce for the sauce mixture, try Hoisin sauce (easily available in Asian supermarkets) and add cornstarch to the sauce.

Replace the meat with a variety of vegetables, such as mushrooms, peas, and broccoli. We can also add tofu for a slightly more chewy texture to our dish.

How to make shrimp chow mein

We will learn how to cook dry Cantonese-style stir-fried noodles in the recipe below which yields four servings.

First, we need to prepare the egg noodles. You can cook them according to the instructions on the packaging.

Otherwise, you can also boil the noodles in a steamer rack. Place the steamer rack on top of a heated wok. We should not completely submerge the rack in water. Let the water boil before throwing them into the steaming rack. Once it has cooked for 2 to 3 minutes, drain them and let them cool. Soak in cold water to achieve extra crispiness.

The preparation time should take about 10 minutes, including boiling the noodles and chopping the ingredients. 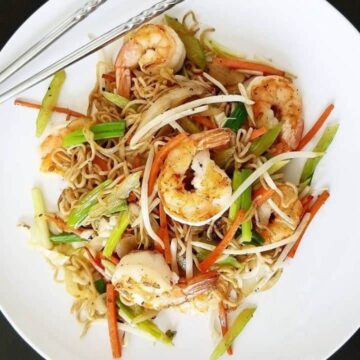 You may also refer to another recipe variation as shown by FoodiePi with Nancy. In her recipe, she uses other types of additional vegetables such as bok choy, mushrooms, garlic and fresh chilli.

We can add chilli flakes while stir-frying the ingredients to make a spicy shrimp chow mein.

For those who cook with a small frying pan, we can cook all the ingredients separately before frying the noodles. Since most store-bought chow mein are parboiled, it will not take much time to fry.

This noodle dish is a quick and simple one that can be stored for a day or two, but take care not to leave it in the fridge for too long as the dish can get soggy when exposed to cold air.

How to serve and eat Shrimp chow mein?

This stir-fried noodle dish is great to eat as a main meal on its own since we can fry the ingredients we want together with the chow mein. Apart from the ingredients mentioned in the recipe above, you can feel free to add other types of veggies or meat to change it up!

Serve the shrimp chow mein with a cold fizzy beer or a glass of white wine to savour its stir-fried goodness.

For more simple, satisfying recipes to try, follow @honestfoodtalks on Instagram for a gastronomic journey around the world.

Are you looking for a spicy treat to enjoy at home instead? Check out our Korean kimchi ramen recipe!