Tapioca pudding is one of those dishes that everyone has had at least once, regardless of where they live. However, with a truly staggering number of ethnic preparations worldwide, it can be challenging to find the right one for you.

However, don't worry! In this article, we explore the intricacies of this often ignored dessert. From substitutions to variations and everything in between!

First and foremost, is that thing you grew up eating really tapioca pudding?

What is Tapioca Pudding?

Tapioca pudding is a creamy pudding that uses tapioca as the main ingredient. You can add this starchy ingredient in the form of powder or pearls.

You can serve it cold, hot, warm or iced. It can be a set dessert or a liquid. Its versatility is why it is a staple in many cuisines worldwide. These countries include the US, the UK, Brazil, China, and Australia.

It is surprising how timeless and pervasive the flavours of tapioca, milk, and sugar are. However, there are many versions with additional flavourings and ingredients added. In some recipes, even these four basic elements are not required.

In fact, most countries make tapioca pudding is very differently. This is due to the respective cultures and ingredients available.

In the UK in particular, this dish gets a bad rep. It is often called frogspawn or eyeball pudding thanks to the spherical appearance of the tapioca balls.

This is probably due to the dish's association with subpar meals at schools. Indeed, this dish seems to be the refuge of picky eaters and ill people everywhere. By extension, it is consumed mainly by a demographic of people who will not appreciate it for what it really is: a simple classic, open to interpretation and customization. Tapioca pudding deserves better!

Tapioca pudding is sweet and creamy with a rich, starchy texture. Most recipes include some other form of flavouring since tapioca (while texturally complex) tastes like nothing. Vanilla and mango are common additions.

Generally speaking, the simple, bare-bones flavour base means that almost anything can be added and incorporated beautifully. You can add fruit, spices, chocolate, caramel, anything your heart desires. If you're serving it cold, try making it like an ice cream sundae. Experiment!

The variations of tapioca pudding are truly endless. However, we have included the essential ones in this section for your convenience.

For example, we included ingredient substitutions and changes to the cooking method, which the variation requires.

This is a creme brulee-esque twist on this classic dessert. Before baking the pudding, many recipes instruct the sprinkling of demerara sugar on top of the surface. Additionally, the cooking time for the tapioca pearls before baking is drastically reduced.

Restaurants that serve this preparation warm feature a lovely textural contrast and crunch on the top and bottom. The baked tapioca pudding recipe also hints at caramel flavours from the sugar getting warm and crispy in the oven!

Although two of the four classic ingredients in the classic recipe are not vegan (milk and eggs), there are ways to make the recipe vegan.

You can omit eggs while substituting milk for a plant-based option. As a result, you can create a heavenly vegan tapioca pudding that rivals the non-vegan one in terms of flavour. Although, the texture might be slightly different.

Using coconut milk and cream is a good choice. Tapioca pearls pair well with fruity and tropical flavours. However, the combination is so good that it still manages to surprise even the most seasoned vegan. One such recipe is the esteemed ube pudding recipe!

Our recommended non-dairy milk in this recipe is soy milk. But any non-dairy milk will work well. There are no significant changes to the cooking method when making a vegan recipe.

If you are vegetarian or vegan, you will have to eliminate the eggs in the pudding. The eggs serve two purposes. First, it thickens the pudding to a luscious, creamy texture. Secondly, it adds almost savoury richness to this sweet pudding.

An excellent substitute for eggs is a simple cornstarch slurry in the first context. The Great Thickener of all things thin and watery.

The second purpose is much more difficult to fulfil without eggs. As a result, most vegan versions of this pudding lean on not having any richness. Instead, it is a refreshing lightness in this tapioca pudding. In some cases, just as good as the rich, luscious version.

However, if you really want that sumptuously smooth texture. Try adding rice flour or agar powder instead. Of course, doing this will make the pudding thicker and less flowy. But, on the other hand, it will give you a nice solid mouthfeel, which might be just what you were looking for.

Sweetened condensed milk is an easy way to add milky sweetness to many dishes. For example, many cooks in Asia add sugar to milky drinks without applying any heat.

As for tapioca pudding, it is an excellent shortcut. Especially if you want to serve the dish cold without ever heating it in the first place. However, its utility is diminished because tapioca pearls require cooking before you can consume them properly.

A small serving of only 100 grams of tapioca pudding contains a whopping 400 calories. This dish is comfort food and so, it has quite a high-calorie count.

We can attribute the high-calorie density to the presence of tapioca within it. It is commonly referred to as a source of empty calories in the health world. This is because there is little nutritional value and yet very calorific.

However, you can somewhat reduce this calorie count by using less fatty milk and less sugar. But, unfortunately, this would fundamentally change the experience of the dish.

To that end, vegan tapioca pudding is much lower in calories without sacrificing any flavours. Though it is not precisely similar to the classic version of the dish, which you might be familiar with, it is absolutely delicious in its own right. However, generally speaking, this dish is not what you should make if you look for something healthy.

Traditionally, this recipe has five ingredients: milk, sugar, tapioca, eggs, and vanilla. Here we will discuss each of these ingredients in detail and what each of them brings to the party regarding tapioca pudding.

The milk has two functions in this dish. First, to add creaminess and second, richness. However, the milky flavour is prevalent in the dish as well. For this reason, the type of milk being used in the dish is critical.

Skim milk is unacceptable as it makes the dish watery and tastes like nothing. Whole milk is the way to go. If you must use skim, add cream to it to add back some fat.

Other tricks that people use include adding milk powder, sweetened condensed milk, evaporated milk, or mixing types of milk. Some even use vegan milk, which adds exciting and unique flavours to the dish.

If you do not care about the intricacies of the dairy in tapioca pudding, we recommend using whole milk or whole milk and evaporated milk in a ratio of 2:1.

The sugar serves one singular purpose of adding sweetness. White sugar is definitely the way to make a classic, traditional pudding. Unfortunately, brown sugar does not work well with milk and its simple flavours. In addition, it ruins the perfect milky white colour.

However, there is always room for experimentation. For example, if you're baking the pudding, brown sugar can add a much-needed semi-sweet caramelization. Additionally, brown sugar will complement their flavours if you're adding spices. Our personal favourite is nutmeg!

We recommend white sugar unless you know what you are doing. Then, of course, if you don't have it, use what you do have.

Despite being the main ingredient, tapioca in this dish mainly adds texture. It has virtually no taste to speak of and is quite dull to look at. But it adds a wonderfully chewy and starchy texture. It's what makes the tapioca pudding so addictive and such a classic!

Tapioca pearls come in many different sizes: the largest ones are most famously known as boba pearls, while the smaller ones are often confused for sago. However, the tiniest of tapioca pearls in this pudding get their moment in the spotlight.

For that reason, try using the smallest size of tapioca pearl you can find. Don't even try substituting it with sago. As for instant tapioca, you might as well do without it entirely.

Eggs are a common pudding ingredient. The egg yolk adds richness, while the egg white adds structure, and the proteins add texture.

If you are vegan, you can substitute these two qualities with a thickener like cornstarch or agar. As for the richness, you would be hard-pressed to find it anywhere else.

Vanilla is essential for adding flavour to this dish. If you omit it, the tapioca pudding will taste like absolutely nothing, so don't skip it.

Also, use the highest quality vanilla you can find. While some people don't include this in their recipes, salt goes well with vanilla and sugar, so include it in this recipe as well.

Check if your brand of tapioca pearls requires you to soak it before cooking, and do so if it does. It affects both texture and cooking time. 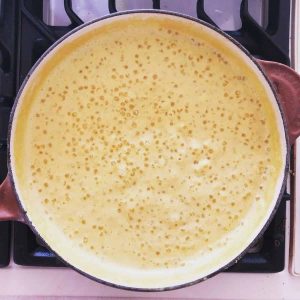 This classic, evergreen tapioca pudding recipe is not just great on its own but also a textbook example of a blank canvas, ready to be changed and improved to your heart's content. This recipe can also be made vegan (substitutions are listed below).
Author: Amaya Oke
4.9 from 106 votes
Print Pin
Course: Dessert
Keyword: tapioca pearls
Servings: 4 servings
Calories: 366kcal
Cook Time: 15 minutes
Total Time: 15 minutes

Wondering if it's actually easy to make at home? Let Sam & Feng Cooking on Youtube show you how! They have made an excellent video recipe of how to make homemade vanilla tapioca pudding that we recommend you check out!

We hope this recipe helped you find your appreciation for the often ignored dessert champion that is tapioca pudding. This dessert is ripe for taking and making your own, and it welcomes mix-ins and alterations very well. So, if you haven't tried it yet, give it a shot. It is one of the easiest desserts to make and certainly a crowd-pleaser. Bon appetit!

Did you give it a go? How did it turn out? Share photos of your homemade desserts with us by tagging us on Instagram @honestfoodtalks.