Q&A, Through the Kitchen Door 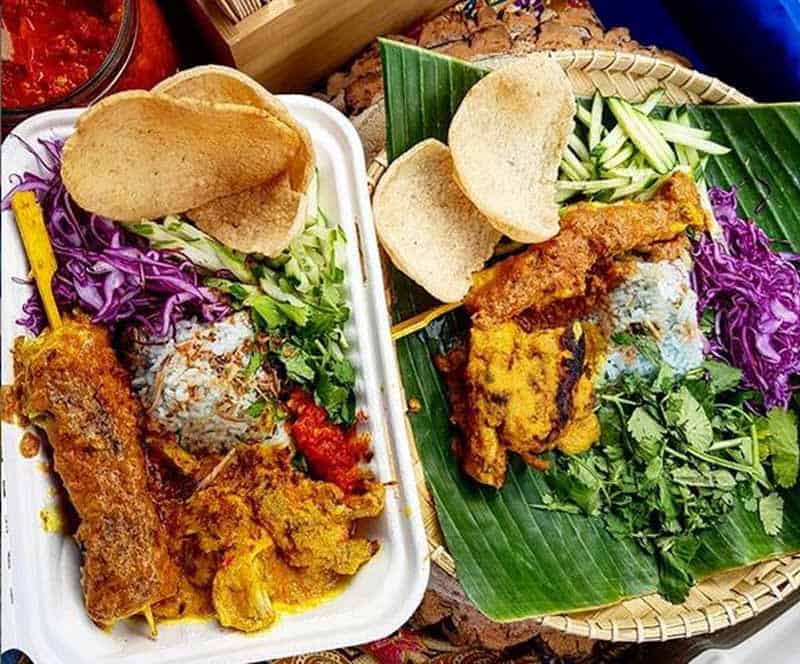 Nasi Kerabu is a Kelantanese dish from the northeastern region of Penisula Malaysia which features blue-hued rice along with vibrant toppings such as Coconut Fish Crackers, Homemade Sambal Oelek (Malaysian shrimp chili paste).

We spoke to Robert about Eat Lah to find out about how it all started and his plans.

1) Where did the idea for Eat Lah come from?

Before I started Eat Lah, I was working in the construction industry, as an architect. I’ve always been interested in doing something business-related and have a passion for food. I also had a YouTube channel where I created content of myself going to different places in London, eating, traveling and sort of documenting that journey.

Then this one day, I was just having a chat with the Mrs and she said, “maybe you should do this [start a food business]”. I always knew I wanted to do something street food-related but just didn’t know what.

We ended up deciding on Nasi Kerabu, a northeast Malaysian dish where my wife is from. I’ve cooked it various times for her before starting the business anyways and it was pretty good. But I thought to myself, “no one is going to want to eat this, the rice is blue, there’s fermented fish sauce in this, it’s a bit awkward, it’s a bit weird, no one’s going to eat this.”

It was my wife who encouraged me, she said, “give it a try, you have nothing to lose.” 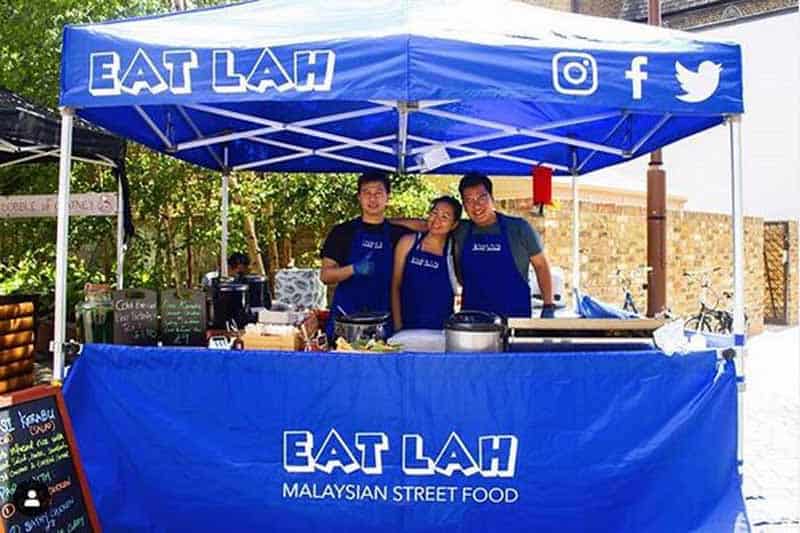 Back then I was still in full-time employment, so this was a weekend thing that I did. I kind of got everything together, bought my gazebo, started serving and people came to buy! After being accepted on the KERB incubator programme, the rest is history. I quit my job in August 2019 and started doing it full time since.

As for the name of the business, that’s a funny story. I was originally going to call the business ‘Teh Rice’. Teh in Malaysian means tea, the whole concept was that I wanted to celebrate the rice and because we cook the rice with different herbs and teas. We thought it was an appropriate name and stuck with that.

Luckily, I had a lightbulb moment when I was having a conversation with the Mrs one day, she said something, and I said back “just eat it lah, just eat lah” and there we had it. If we didn’t have that conversation, we’d be stuck with a really crappy name now!

2) What does your typical day look like and how do you make it productive, keep yourself busy?

Keeping myself busy is something I don’t have to worry about because I’m constantly busy. Running a street food stall is a lot of demand in time. On a typical day of trading, I’ll wake up around about 7 o’clock, get ready and put everything that I’ll be using for trading in the cool box.

Take the Mrs to work, drop her off at the station and then I drive to wherever it is I’ll be trading. Now I do street food and indoor catering, but the day plans out quite similar but there’s a lot more involved when we’re doing street food. 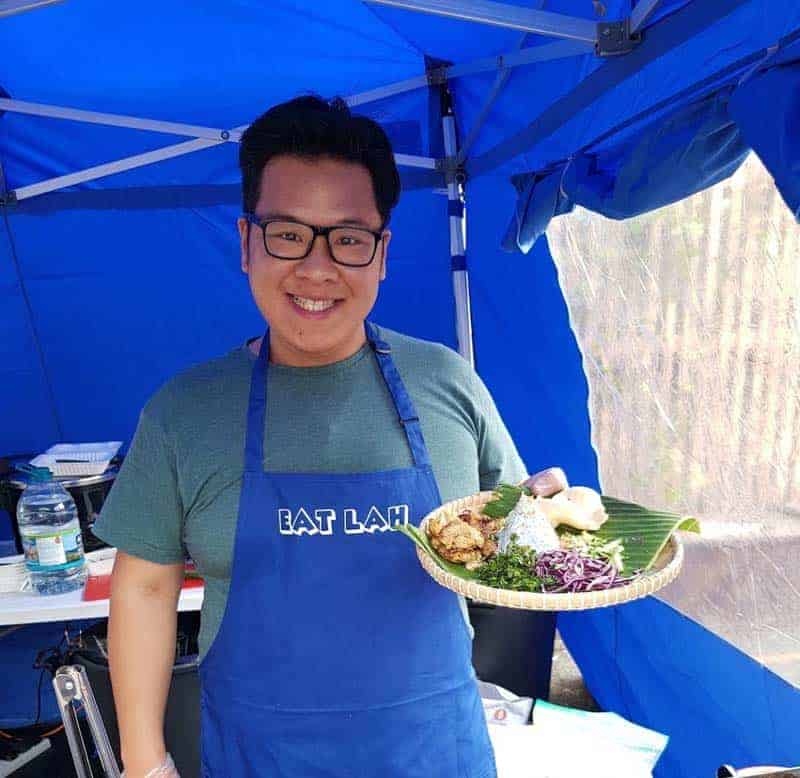 On average it takes me about an hour a half from my house to the location in London. I drive to the location, unload all our stuff and set up everything. I brief my staff on what to expect today, if there are any changes to the menu, and how we can improve on things.

We prep, we serve, and we do the complete opposite after service. We clean, we pack the van, go back home and prepare for the next day. When I get home, I also do the admin stuff, bills, invoices, connect with people who have been reaching out on Instagram and other social media platforms and continue prep for the next day.

Now is a little different, as I’m not physically out there. But last week I launched an online store and I’ve been selling sauces and marinade I’ve been using for our stores. Luckily enough it’s been doing okay and it’s a good way for me to connect and build a relationship with people who have been following me on Instagram.

3) What is one habit of yours that makes you more productive?

In general, I’m quite a lazy person. I have more bad habits than good habits, to be honest! Running a food stall is something I enjoy; I don’t need anything to motivate me to do it.

Before I would listen to podcasts to motivate myself whenever I feel unmotivated regularly.

I’ve had the phase where I didn’t know what I wanted to do. I would be listening to podcasts every day, trying to figure out what I personally want to do and life. Now that I’ve kind of found something, its all about execution for me.

I talk to my friends every day and keep in touch with them. I tell them my successes and failures that I’m going through every day. This keeps me grounded and helps me carry on.

4) What advice would you give your younger self?

Be patient. There was a phase when I was chasing paper. I did things where I started so-called businesses or started different ventures thinking that it would make money. Now, I would tell myself to be a bit patient. 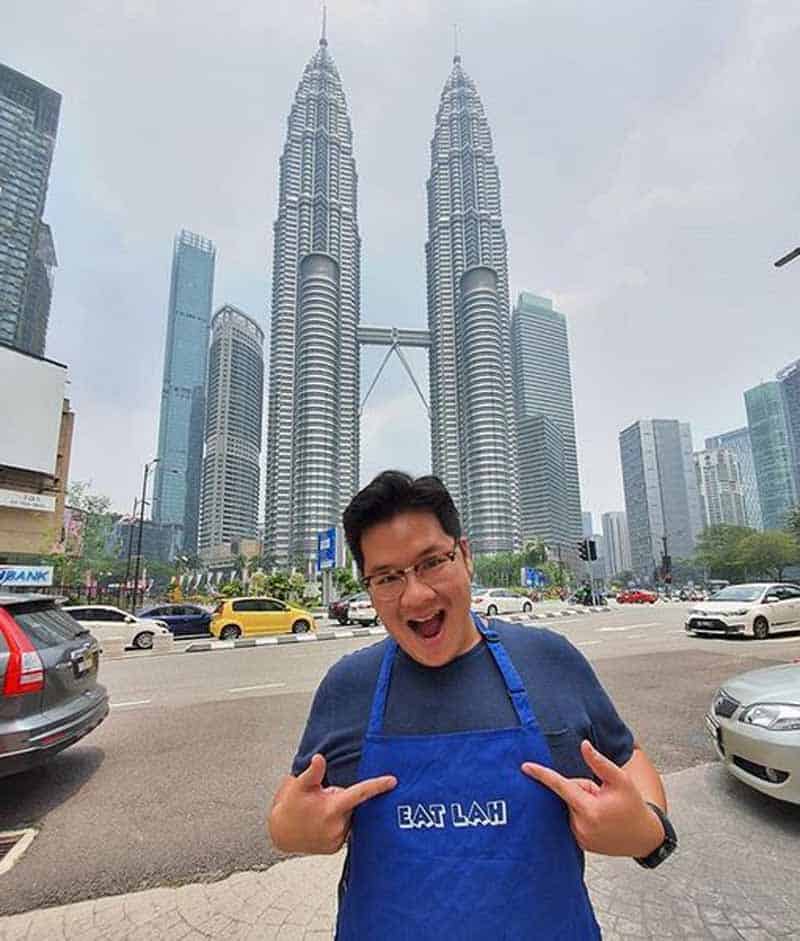 Really step back and discover yourself. See what you really want to do. Find something that you enjoy and spend more time with your loved ones. Take your time, life is long and just enjoy it. Don’t think too much about what people think of you and just do what you think is right to do.

5) What is the one thing you do over and over again and recommend everyone else do?

Professionally, I would say just be kind to one another. Whenever I’m trading, I always greet other food stall owners, introduce myself and try to get to know them. I’ve built a reputation where people can rely on me.

Sometimes people might be short of forks, tissues or whatever, and I always offer to help. In return, I’ve built a good relationship with everyone and whenever I need something, no matter how absurd it could be, they always offer to help. They’ve gotten me out of a lot of shitty situations.

That kind of flows through my personal life too. Just be considerate and a nice person!

6) What is one strategy that has helped you grow your business?

Kindness is one thing, but at the end of the day a business also needs to be reliable and trustworthy. It’s important to be completely upfront and honest with anyone.

It is about being honest with them, being on time, being reliable and being friendly. Its just the fact that I’m being friendly that people give me more opportunities as well. Whenever I am given the opportunity, I always try to do the best I personally could as well which is a win for everyone!

I try to build a good relationship with my customers too, some I could even call a friend now. I try to make them something special if I know its their birthday, and in return they actually bought me something on my birthday! The best marketing isn’t social media, it is still word of mouth. 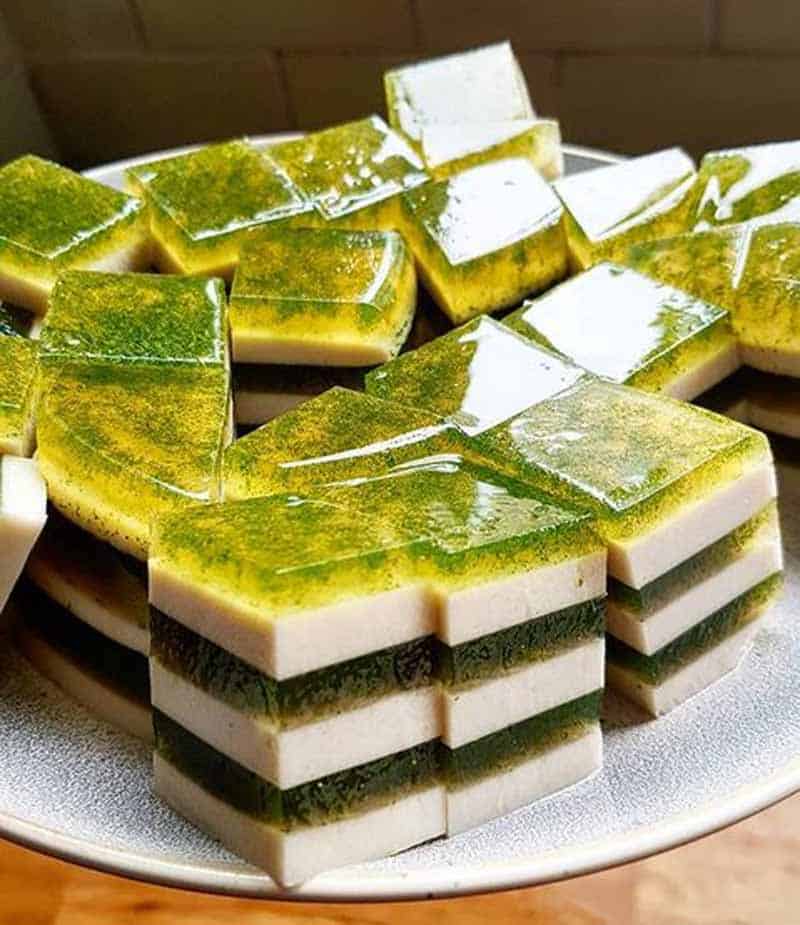 Delicious Kuih Talam from Eat Lah. Kuih Talam is a Malaysian steamed pudding that's Vegan and Gluten Free. These are made from rice flour, tapioca flour and mung bean flour along with pandan leaves and coconut milk.

Ever since we started making kuih (a sweet dessert) from July, we’ve only sold it once at the store. All the other times, it’s to give away for free. Everyone says I’m crazy for giving it away for free I could sell a couple of kuih for £2.

But my theory is, if I can give away as much as possible without me losing money, then its good value for me.

The value I’m getting isn’t monetary, it’s the loyalty of my customers which is much more important.

It also allows us to strike up a conversation with the free dessert we’re giving away on the streets.

I try to be nice to my followers on Instagram and once I launched my online store, the response has been overwhelming! To the point that I’ll probably have to stop taking orders. I believe the success I’ve had so far is because of the relationship I have with my customers.

7) What’s one trend in the F&B industry that excites you?

In terms of trend, there are always peaks but what’s more in importance for me is that you have to be authentic in the way you operate your business. That’s a trend that never gets old. Your food must be good and delicious, that’s the only way to retaining customers and getting them to return.

Food must be delicious so people will tell their friends. The food needs to look good as well, it has to be photogenic so people will want to share on social media. I try to make my food as photogenic as possible. Nasi Kerabu is a very colourful dish, blue, green, purple, red. A dish needs to be sharable and make themselves [customers] feel unique. 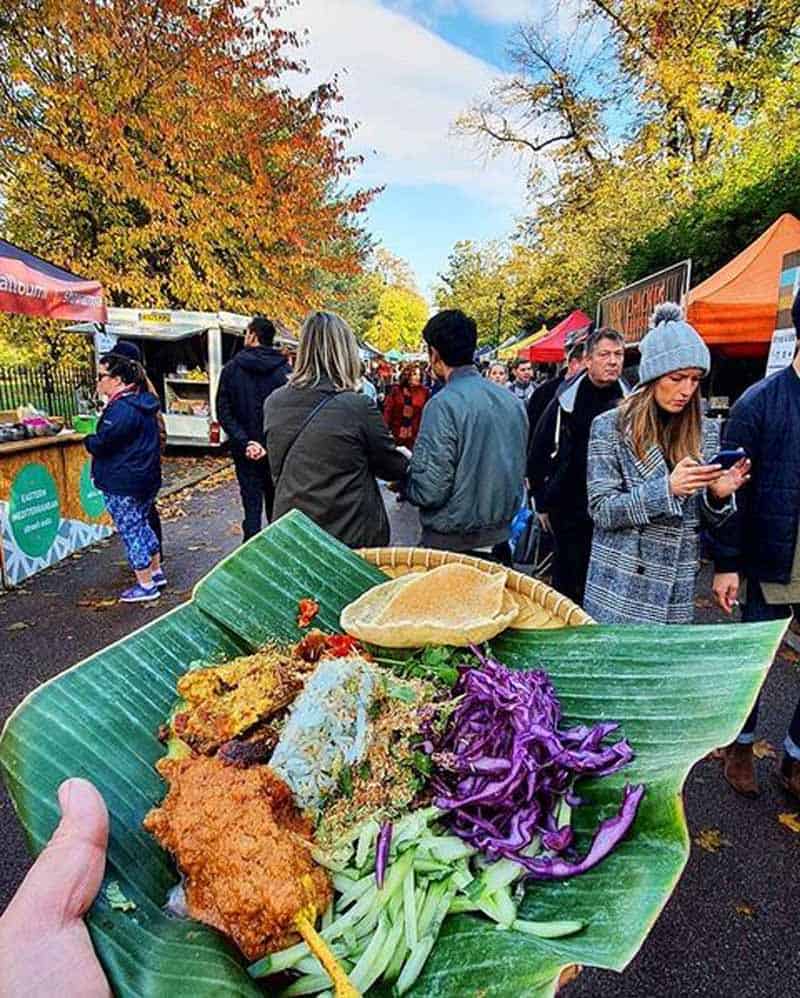 A colourful and delicious dish of Nasi Kerabu

It’s not really £20 but I recently bought a pair of crocs. Yeah – one of those really ugly shoes. I stand a lot while doing prep work at home and the slippers I have just aren’t comfortable. These ugly crocs make my prep work time a little more bearable!

9) What is your favourite quote?

I have different quotes for different periods of my life. But there is one quote by Bruce Lee, of course.

Think it’s a really good quote to stand by and motivate me to stop thinking and just do.

10) What are some of your favourite places to eat at?

Palomar, a quirky restaurant in Soho that does Jerusalem food. I wonder around London and try places out rather than read reviews. I like to take the risk!

11) What’s the best thing to order from Eat Lah?

Nasi Kerabu is a Kelantanese dish from the northeastern region of Penisula Malaysia which features blue-hued rice along with vibrant toppings such as Coconut Fish Crackers, Homemade Sambal Oelek (Malaysian shrimp chili paste).

12) Are there any exciting plans coming from Eat Lah soon?

Right before the current crisis, I was looking to expand the business and hire 3 more staff on a full-time basis. I’ve been doing a lot of indoor catering and instead of having a second set up on the street, I was thinking of having a permanent set up somewhere.

Now, the plan is to continue with my online store, expanding the catalogue online and potentially offering delivery service around the UK. 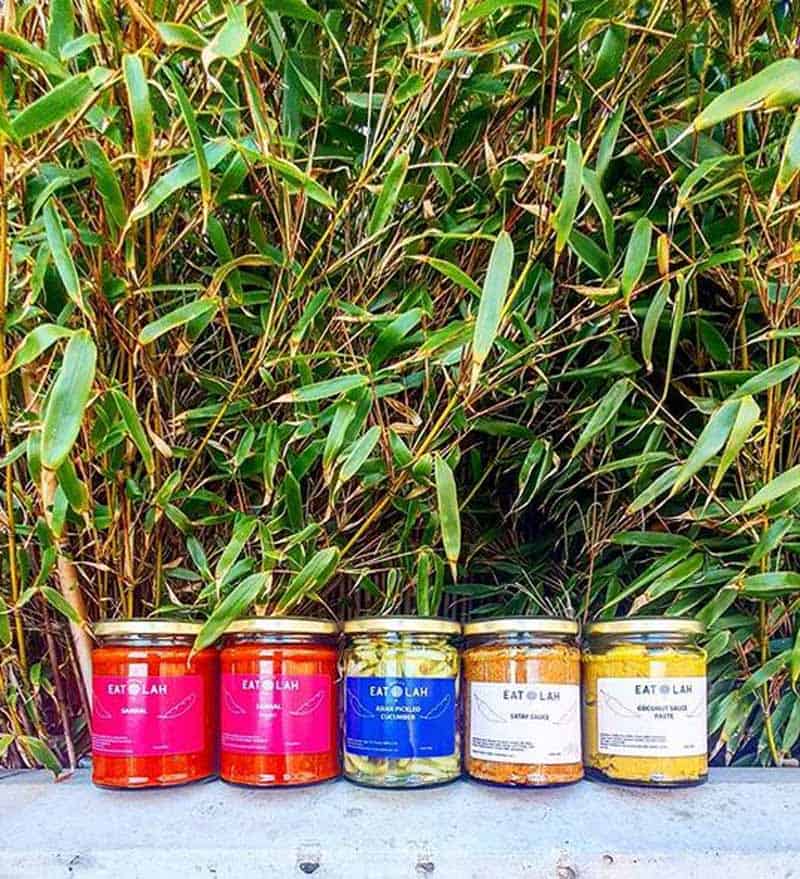 As a small business owner, Robert has adapted his business model in creative ways to communicate with his customers and sell online despite the current UK lockdown situation.

While we wait for Eat Lah to return to the streets of London, support the business by heading over to their website to see the tasty selection of sauces to recreate some of your favourite Malaysian dishes at home!