Have you ever tasted honey milk tea before? It is the most delicious and delightful version of boba. Learn this simple honey boba recipe to make at home.

The drink was created in Taiwan in the 1980s, apparently at a street food joint. Numerous vendors have come out claiming they were the originators of such a brilliant idea.

Regardless of who came up with the delicious drink, that person was an absolute genius! The person probably deserves a statue. If you do not know much about honey boba or honey milk tea, the probable reason is that you are an indoor person.

You can find numerous Taiwanese drink shops around even though they are not on par with Starbucks. But they have gained popularity over the years throughout the United States. Another reason could be that you know the beverage snack by a different name. Other names for this drink include bubble tea, boba milk tea, pearl milk drink, or even tapioca drink.

We will be sharing how to make honey milk tea and why it is one of the delicious types of boba to drink. But first, a little background for the uninitiated.

Milk tea was already in East Asia or Taiwan before boba was invented. It has been popular in the country for many centuries. The Dutch and British introduced the beverage when they came to India. Milk tea got into Taiwan when the Dutch colonized Taiwan in the early 17th century.

The combination became an instant hit. Initially, it was called bubble tea, but it was renamed later "boba," meaning breast in Chinese slang term. The people gave it that name due to the tapioca balls' shape that floats in the drink. The tapioca is prepared from cassava starch, also called yuca, which is similar to yam.

As time went on, more shops started serving their versions of this drink, fruit syrups, fruits, and powders, including natural sweeteners. They replaced these ingredients with the flavoured shaved ice.

Boba shops and street vendors started experimenting with ingredients aside from tapioca. They used almond jelly, egg pudding, red beans, or rice balls in place of tapioca pearls. Others also replaced the milk with non-dairy creamer. That way, the concoction would maintain its stableness until served. The replacement made this beverage highly sweet and creamy.

Some of the most popular drink flavours include honey boba, rose, taro fresh milk and brown sugar.

However, regardless of the many variations, this Taiwanaese beverage snack are all still referred to as bubble or boba. Its popularity caused almost everyone to go to the Taiwan street markets to get one for themselves.

The popularity gained a foothold in Japan, Hong Kong, and China in the mid-1990s, then moved to Oahu. It moved to Japanese, Taiwanese, and Chinese neighbourhoods in the United States and Canada. These neighbourhoods have local Asian tea shops that started selling boba, and people enjoyed their chew, delicious beverages.

Now, let’s find out how to make honey milk tea at home.

How To Make Honey Milk Tea

Many people prefer to prepare their tapioca pearls by themselves, but it is simpler to purchase pre-made tapioca balls at any Amazon and Asian supermarket. With pre-made boba, you can easily make honey boba tea anytime you want at home.

The first homemade honey boba recipe is where you add the sweet syrup to the beverage as a sweetener. 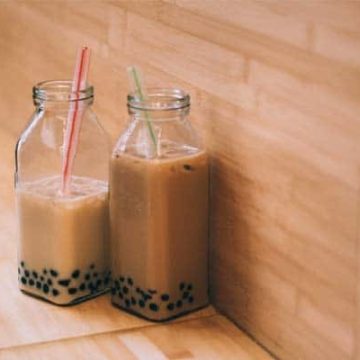 You can easily double this honey boba recipe and adjust the ingredient proportions to your preference. If you want to know how to make honey boba from scratch follow the steps below:

Coated with this natural sweetener, these are chewy, sweet and make a perfect dessert topping for shaved ice. Alterntively, you can also have these with plain cold milk!

Nutritionists widely acknowledged that the natural sweetener is one of the healthiest foods around today. The polyphenols and phenols in the tea can also fight against medical issues such as heart disease. Unfortunately, it does not make honey milk tea, or honey boba a remarkably healthy drink.

You can use raw, unfiltered honey, which contains bee pollen that gives the natural sweetener its massive health benefits to make boba. Even still, that will not help.

Tapioca pearls are not healthy because of it is high in carbohydrates. In addition, it is also high in calories. Unfortunately, tapioca pearls has no vitamins, no nutritional values, and little minerals.

If you prepare your beverage with whole milk, it adds to the fat and calories. In other words, boba has no real health benefits, but only its taste. Adding honey will not get you the health benefits you want.

Does it mean you should stop taking honey boba? Of course, not! However, it is not advisable to make it your daily diet.

Honey milk tea is a delicious treat that most people in the United States enjoy each year. You can enjoy it now and then, but moderation is key. With moderation in mind, it is the best way and delicious way to consume honey.

Learn about the calories in boba next!