Menbosha, a Korean-style shrimp toast, might be the next best thing you've ever tasted, especially if you're a sandwich lover!

Bread is such a versatile ingredient that there are tons of ways to enjoy it. You might have had your sandwiches with avocadoes and honey but have you tried fried shrimp toast? If you love prawns and toasts, then menbosha is a perfect dish for you.

This article will go through the various methods (pan-fry, air-fry and oven-bake styles) of preparing this delicious Asian toast dish. We have also included a chicken variety of the plate, in case prawn is not to your liking. It is super easy to make at home!

Mian bao xia is a Korean-Chinese dish consisting of marinated shrimp balls sandwiched between milk toasts. Its name originated from the word 'mian bao', which means bread and 'xia', meaning prawn in Chinese. It is pronounced as "menbosha" (멘보샤) in Korean.

This fried toast became the talk of the town after it was introduced by a Korean-Taiwanese celebrity chef, Lee Yeon-bok. It is a best-seller at his restaurant, which specialises in Korean-Chinese cuisine. It is so well-known that it's a sport to get a reservation! Unfortunately, it is a struggle to secure a table, but the dish is also pretty costly for a sandwich.

However, you can make it yourself without fighting for a seat or burning your pockets. The famous chef has generously shared the recipe on various cooking shows. Therefore, you can follow Lee Yeon-bok's recipe to make them at home.

There's also 'Yuri's recipe' shared by the actress Lee Yuri on 'Stars' Top Recipe at Fun-Staurant'. The original menbosha recipe inspires it with a bit of a twist.

Mian bao xia is savoury with a crispy outer part, whereas it's inside is soft and chewy. Although you can eat it on its own, it can be a bit boring and greasy.

To add more fun, you can enjoy it with a sauce or two! Ketchup and garlic sauce are perfect matches for this dish to add a sweet and tangy taste.

A regular serving of menbosha contains about 118 calories. This makes it an excellent appetiser and party snack to enjoy.

Since it is deep-fried in oil, mian bao xia can be very greasy. Therefore, it is better to air-fry it instead as less oil is needed. It also makes the sandwich a bit healthier without sacrificing the crunch and taste. Just brush over a bit of oil onto the sandwich and air-fry at 170°C for 10 minutes.

Not a seafood lover? You can substitute the prawns with minced chicken for your fried toast! Also, you should note that cooking with chicken means a longer cooking time. The chicken menbosha should be fried on medium heat until it turns crisp and golden.

You can prepare the sandwiches in advance and save them for later by making frozen menbosha. This would be perfect for days where you get a sudden craving for this delicious snack. You can get some out of the freezer and fry them up!

However, make sure not to overstuff them in one container. This is because milk toasts are fragile, and doing so will squish them. Instead, it is better to store a few in several containers and stack them up in your freezer. With proper storage, they can last up to 3 weeks. 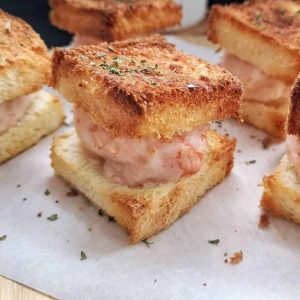 Not convinced that it's easy to make? Youtuber sweetpotagoh has made a video recipe to show you how easy it is to oven-bake the prawn toasts at home! Check out his video below to see him making the dish from start to finish.

How did your mian bao xia turn out? Please share with us a photo of your lovely homemade snack by tagging us on Instagram @honestfoodtalks!

Craving for a bready snack but something sweet instead? Do you know about Honey Toast Box, a guilty pleasure amongst many fans across Japan and Korea? If it is your first time reading about it, check out our home recipe on making it!