Korean Cucumber Salad, also known as Oi Muchim and Saengchae, is a delicious and refreshing vegetable side dish. A popular summer dish in Korea, it is now enjoyed worldwide in many restaurants and home kitchens!

You can make this healthy dish using ingredients that are readily available in any pantry and requires no complicated prep. It is as easy as it is crunchy and delicious. You can get yourself a delicious side dish in just about 5 minutes. Feel free to adapt the classic version with your favourite seasonings for a personal touch!

We also give you the recipes for a non-spicy Korean cucumber salad, the traditional spicy one, and a keto-friendly version! And if that’s not enough to make you drool, we direct your attention towards the recent internet craze over Asian salads. If you want to learn how to make THAT Korean cucumber salad from Tik Tok, you’re in the right place.

What Is Korean Cucumber Salad Made Of?

Traditional Korean cucumber salad is made of cucumbers, green onions, garlic, and sesame oil. It is a straightforward side dish that allows you to use any kind of crunchy cucumber. The most common one used to make the dish is the crunchy Korean Oi (‘cucumber’ in Hangul). However, other versions, such as Kirby, Persian, Japanese, and English cucumbers, would make a delicious substitute.

The side dish is often seasoned with a host of seasonings. Among them are vinegar, soy sauce, sugar, salt, sesame seeds, and chilli powder or chilli flakes. Heavier seasoned Oi Muchim pairs well with rich meals such as Korean barbecue. On the other hand, the lighter seasoned version is more suitable for lighter meals such as noodles and rice.

The traditional Oi Muchim is often served spicy with the incorporation of chilli powder or chilli flakes. Local cooks typically use their trusty Gochugaru and Gochujang for this. But if your palate is not used to the spice prevalent in most Korean dishes, you can opt-out of the chilli powder and flakes. No worries, our version of Korean cucumber salad is not spicy!

This vegetable dish has a harmonious balance of sweet, savoury, spicy and tangy. It packs a punch in every bite!

Every bite of it is refreshing, vibrant and crunchy. And it will surely add some tasty spiciness to your meals. The sesame seeds further add the element of crunch and nuttiness, giving your salad extra texture and flavour.

This flavourful dish packs 60 calories per serving, making it one of the healthiest things you can eat. It also makes a great Korean snack if you’re looking for a healthy alternative to your usual chips.

The ingredients required to make this non-spicy vegan Korean cucumber salad are:

Any kind of cucumber will work for this dish. However, try to get your hands on Korean Oi for an authentic, crunchy Korean cucumber salad. They are light-coloured, slender, and have bumps on their thin skin. You can find them at an  Asian supermarket. Avoid getting cucumbers that contain a lot of seeds because it may result in your Oi Muchim being soggy.

Any type of sesame oil would work, but we recommend getting Korean sesame oil. It has a slightly different taste and aroma as compared to Chinese sesame oil. It is also lighter in colour and flavour, making it highly appropriate for salads.

Soy sauce will add extra flavouring, especially when you're making a non-spicy version of the salad. You can also substitute soy sauce with coconut aminos or tamari sauce.

Apart from seasoning, salt and sugar are required to draw out moisture from the cucumbers. This will make your vegetables crunchier!

Smashing cucumbers is a classic Chinese technique. The process helps crack the skin, release the seeds, and split the flesh into appealing, craggy pieces. Moreover, it also increases the surface area, so more seasoning is absorbed into the green vegetables. A Korean crushed cucumber salad will need some marination time to absorb all the flavours.

For preparing a smashed Korean cucumber salad, you can do it in two different ways:

The cucumber is smashed as a whole and later cut into small pieces. To do so:

Pro tip: Wrap the vegetable in a plastic bag. This can avoid splatters and keep your workspace clean.

Method 2: Pre-cut the cucumbers before smashing

Most cucumbers can be pretty thick, especially the Japanese ones. This can make smacking them whole quite tricky. Hence, using this method, they are pre-cut before smashing.

To make it spicy, you will need to add some spice seasoning to the Korean cucumber salad. Here are some ingredients that you can use to make your salad spicy:

The easiest method of making any of your food spicy is to sprinkle some chilli flakes over it. And this also applies to Oi Muchim! Just like how you would sprinkle chilli flakes on your pasta or pizza, simply do the same for your salad.

Gochujang is a paste that is very common in Korean cuisine. It is used in many K-foods, including the famous Tteokbeokki. Traditional food makers prepare Gochujang from red chilli peppers, rice, fermented soya beans, and salt. You can adjust the level of spiciness depending on the amount of chilli paste you incorporate into your salad.

Gochugaru is a chilli powder that is pretty similar to chilli flakes. The powder is coarsely ground and made from deseeded sun-dried peppers.

While Gochugaru is hot, it does have some sweet and smoky flavour notes. The spiciness level will also depend on the method used to dry the peppers. The heat level of Gochugaru lies between 1500 and 10,000 Scoville units.

To prepare the spicy Korean cucumber salad recipe, just add a teaspoon of Gochujang to your salad. Similar to Gochugaru, you can also adjust the level of spiciness by increasing or decreasing the amount you use.

There is no other spice that can imitate the flavour of Gochugaru. However, if you don't have Korean chilli paste or flakes, go for paprika and cayenne pepper! Mixing paprika with cayenne pepper can be an excellent substitute for Gochugaru.

Apart from the ingredients above, you can use any other kind of substitute that you like. You can use other spices such as Aleppo chilli flakes and chipotle powder.

Oi Muchim may seem very similar to Oi Kimchi, which is Cucumber Kimchi. However, the two are very different from one another. For one, kimchi is a fermented pickled dish. Oi Kimchi is a dish which incorporates many other vegetables, such as carrots, radishes, and cabbage. And, of course, the kimchi sauce makes all the difference.

To make a keto Korean cucumber salad, you need to cut down on the sugar. However, if you still need some sweet flavouring, you can use one of the sweeteners mentioned below. They are low-carb sugars that will give you sweetness without calories.

How Long Does A Korean Cucumber Salad Last?

It typically lasts for about four days. If you're planning to store it for longer, the salad needs to be refrigerated in an air-tight container. 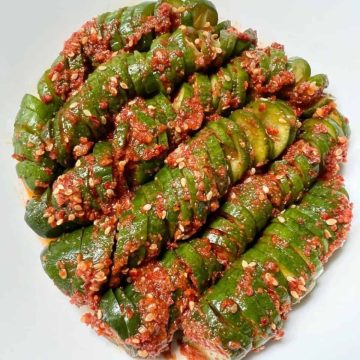 Variations to Try Next

If you’re feeling adventurous, you can try different variations of this vegetable dish. These variations are equally delicious in their unique way.

The Korean cucumber salad Recipe (Oi Muchim) is a fresh and flavourful recipe that is an excellent addition to the dinner table. This Asian salad recipe is quick, easy to make and packs tangy, sweet, and vinegary flavours. It makes a fantastic dish for a side and is a great lunchbox recipe.

Apart from packing tons of flavour and vibrancy, this staple Korean side dish is also full of nutrients and health benefits, making it perfect as an indulgence or a tasty keto or vegan option. Who said salads have to be boring? The Korean cucumber salad is anything but!