Mochi donuts are the next doughnut craze that has got everyone talking. We’ve seen multiple hybrids over the years – cronuts, waffle doughnuts, duffins – and now comes their tasty cousin: ‘Pon De Rings’.

This sweet and chewy dessert has become popular all over because of its cute shape and creative decorations. It makes for a nice snack to have for tea…or any time of the day. We’re not here to judge. If you’re looking to create this yummy treat at home, we’ve got a simple and easy recipe for you to follow.

Read on to learn all there is to know about mochi donuts and how you can make some at home. Our recipe will be focusing on the conventional frying method. However, we have included alternative baking methods too!

What are Mochi donuts made of?

As for the icing, the options are endless. You’ll find that most recipes use a basic sugar glaze made from icing sugar and milk. From there, you can add on other flavours like vanilla, matcha, strawberry or chocolate. Most places that make mochi donuts like adding colouring to the icing to give the desserts an aesthetic appeal.

The origin of this tasty delight isn’t super clear, but we know that the story involves a few countries, i.e. Japan, America, and Brazil. The popular Mister Donut global chain first created the signature Pon de Ring in 2003. Although the chain originated from the US, this creation came from Mister Donut in Japan.

The dessert is made up of 8 dough balls connected to form a ring. Pon de Ring draws its inspiration from Pao de Queijo, a famous Brazilian cheese bread that has a similar chewy texture to mochi donuts.

The initial Pon De Ring’s made by Mister Donut was topped with basic sugar glaze, but the chain has since experimented with various flavours and designs. Popular options include strawberry glaze, chocolate dough, and brown sugar.

This modern Japanese dessert has become a worldwide sensation, with shops popping up in Asia, Europe and America. However, the hype for these yummy treats first started in the US when Liliha Bakery in Hawaii began making poi mochi donuts from the taro root.

MoDo Hawaii then opened a store in Mitsuwa Marketplace in Waikiki sometime in 2017, drawing crowds of people desperate to try the famed dessert. With the cute designs, delicious taste, and America’s natural obsession with doughnuts, the dessert did not take long to become popular nationwide.

The snack first gained popularity on the West Coast before taking over states like Philadelphia, Boston, and NYC. Most of these places have experimented with taste, texture, and design, providing people will all sorts of options. The popularity was further enhanced with the possibility of mochi donuts delivery to homes.

How are they different?

Pon de rings are different from the ubiquitous Krispy Kreme or Dunkin’ Donuts because of their characteristically chewy and stretchy texture. This textural delight comes from glutinous rice flour, a common ingredient in Japanese desserts such as the red bean daifuku. Some recipes also use silken tofu to create a fluffy yet chewy bite.

Regular doughnuts use wheat flour instead, giving them a soft and fluffy bread-like texture. They are also commonly deep-fried, but you’ll find that the glutinous rice variety can be deep-fried or baked, depending on your preference. Mochi donuts also contain about half the calories of regular doughnuts, making them a much healthier alternative. An added plus is that they are also gluten-free.

Mochi donuts on their own have a subtle, sweet taste. However, if you’ve had this dessert before, you’ll know that the main attraction is its signature chewy texture. Its outside is crispy after being fried or baked, making it complement the chewy centre well.

Ultimately, the taste of these delicious snacks depends on the icing. The most common option is a classic sugar glaze, which tastes sweet and has a sticky, gooey texture. Icing flavours for this snack is often a hybrid between American and Japanese favourites: matcha, cinnamon and sugar, black sesame, chocolate with rainbow sprinkles.

Mochi donuts contain about 277 kcal which is half the calories of regular doughnuts, at around 400-500 kcal. However, the calorie content also depends on the method of preparation. For example, if you’re deep-frying the dessert in oil, it will contain slightly more calories than the baked version.

It would help if you kept in mind that using too much Mochiko can make your food gum-like, so be careful not to overdo it. This is due to short-grain rice having a higher content of starch vs other types of rice. Also, be careful not to confuse sweet glutinous rice flour with rice flour because the latter is made from ground long to medium grain rice. Using rice flour will give you a very different consistency because of the lower starch content.

How to make Mochi Donuts

There are two main methods of making this guilty pleasure of a dessert. Frying is the conventional method, whereas baking is another method that is considered a healthier alternative. Another vital part of making these snacks is the glazing.

Let’s look into more detail about each process below.

Frying mochi donuts is a quicker and easier way of preparing these tasty treats but may not be the healthiest.

Start by mixing the milk, sugar, and glutinous rice flour, then add the beaten egg and melted butter until it turns into a sticky dough. If it’s too wet, you can add in 1-2 tablespoon of flour. Knead the dough with your hands for 5-6 minutes and divide it into smaller pieces to form the balls with your hands.

Place the eight balls on a square baking sheet and connect them to form a ring. If you don’t have the time, you could opt to use a piping bag instead to make your mochi donuts. Dab some water on the dough balls using your hands or a pastry brush to make sure they stick together.

Heat the oil between 168ºC and 177ºC. Drop the dough in the oil, submerging it for 1-2 minutes. Then, flip onto the other side and fry until golden brown. You can start to peel off the baking sheet while it’s frying slowly. Once done, transfer to a wire rack to drain off the excess oil.

Be careful to get the temperature of the oil just right. If the oil is too hot, it can make the dough brown too soon, producing a crispier texture. Conversely, a very low temperature would take longer to cook, causing the dough to absorb too much oil in the process. We recommend using a cooking thermometer to ensure that the temperature is at its optimum throughout the deep-frying process.

If you’re more health-conscious, baked mochi donuts will be a healthier option. The steps for this method isn’t too different from deep-frying; however, it will take slightly more time, approximately 75 minutes in total.

Start by preheating the oven to 170°C and heating a sugar, milk, and vegetable oil mixture in a saucepan. Slowly add flour to the mix and stir until smooth, then remove from heat and add in the tapioca starch. Add in beaten egg to the mixture and then transfer to a piping bag. Pipe 8 balls onto baking paper that join in a ring. Once done, bake it for 12-15 minutes or until lightly golden brown.

Be careful to keep an eye on the consistency of the batter when adding in the egg. You want to avoid a runny texture as that would make it hard to pipe. Also, be sure to bake the mochi donuts thoroughly and until lightly golden brown as removing them too quickly will make them deflated.

Lastly, piping the balls in a chain can be pretty tricky. Be sure not to pipe them too far apart or too close either. Drawing out a circle template to put beneath the baking sheet would help you keep the shapes uniform.

Making the mochi donuts’ glaze is probably the most fun part because you can go all out and be creative. The typical glaze used is a basic sugar glaze made with icing sugar and milk. But if you’re looking to be more innovative, you could add some flavouring and colouring to that base.

The trick in making the perfect glaze to coat your mochi donuts is getting the consistency right. The glaze shouldn’t be too thick as it will form clumps nor too thin as it will drip down the sides. The right consistency will be thick and drip down in ribbons.

Like most pastries, it’s best to eat mochi donuts while they’re still fresh. However, if you cannot devour them right away, you could store them in an air-tight container at room temperature. This should last up to 2-3 days. 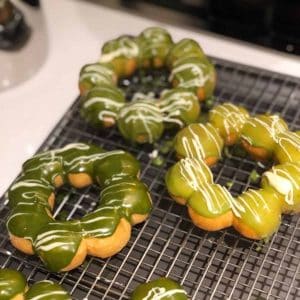 This Pon De Ring or Mochi Donuts recipe is a fantastic dessert to make and enjoy at the comfort of your home. The crispy and chewy texture of the fried pastry, combined with a sweet Matcha glaze will leave you craving for more! This recipe makes 8 to 10 pieces and can be completed within an hour!
Author: Honest Food Talks
4.81 from 56 votes
Print Pin
Course: Dessert, Snack
Cuisine: Japanese
Keyword: dessert, donuts
Servings: 10 pieces
Calories: 277kcal
Prep Time: 20 minutes
Cook Time: 30 minutes
Total Time: 50 minutes

Sundae Bakes has a beautiful video recipe that shows the whole process of preparing this dessert. Instead of a Matcha glaze, Sundae Bakes makes a simple sugar glaze for half the portion, and the other half is dipped in cinnamon sugar. A great alternative recipe that we also recommend you check out!

Did you like this recipe very ‘mochi’? Try your hands at this homemade mochi next!