Narutomaki is a steamed cake of fish paste used as a ramen topping. If you've ever wanted to make a ramen topping from scratch that requires minimal effort and ingredients, this is the article for you!

This ultra-healthy, delicious snack is also being used in a variety of unconventional ways, so join the food revolution and make these fish cakes with our expert recipe!

Narutomaki is a type of surimi (minced fish paste) characterized by its pretty pink swirl in the centre and the jagged edges. It is also considered a type of kamaboko, which is similar to the common Asian cuisine ingredient, crab sticks.

If you've ever seen the anime about the plucky young ninja with the orange hair named ‘Naruto’, now you know what he is named after! In addition, this Naruto character’s favourite food is none other than ramen with topped narutomaki (kamaboko) topping!

That's right: a steamed fish cake used as a ramen topping. These narutomaki cakes were also named after the whirlpools in the Naruto Strait. These spiral whirlpools are alluded to through the spiral decoration in the centre of each cake.

It fell out of favour with ramen enthusiasts around 30 years ago. Nowadays, most prefer toppings with more complicated preparations such as roasted meat or cured eggs.

However, this particular fish cake is both healthy and simple to prepare at home. Thus, it can reliably be prepared at home both sustainably and cruelty-free, which has contributed to its resurgence in recent years.

What is it used for?

Its most popular use is as a topping for ramen dishes. Most ramen ingredients tend to be brown and green. Thus, the pink and white colour of narutomaki makes it contrast delightfully with the rest of the dish and it looks much nicer as a result.

It can also be used to top cold noodles like soba and udon, as well as other dishes which use dashi broth (such as oden). Dry Japanese noodles dish recipes like yakisoba and yaki udon may also be served with a side of this surimi.

You can also deep fry it to make tempura or use it as a protein-rich crouton in soups and salads. It can even be eaten on its own as a snack.

And with new, innovative noodle recipes (like ramen burgers and ramen stir fry) on the rise, naruto kamaboko shows even more promise and versatility.

These fish cakes have a pleasantly chewy, rubbery texture since the fish was turned into a fine paste and then steamed. This forms the perfect backdrop for the snap of vegetables and the bite of noodles.

As for flavour, they lack the strong seafood taste one would otherwise expect, since the fish is washed thoroughly. Instead, they provide a warm umami glow, perfectly blending into the background of the sauces and spices of the ramen (or other broth dishes).

If eaten alone, they can be paired with sriracha or some other zesty dipping sauce to complement this flavour.

Why should you make this?

Making narutomaki is a dying art. This classic old ramen topping has been replaced by other, less esoteric ones. Fish cakes are not as important for flavour as they are for colour and appearance (as has previously been said). Deep red smoked meat, or rich yellow and bright white eggs, are used in place of fish cakes.

Despite this, these kamabokos have uniquely distinct flavours and appearances which have made them iconic ramen toppings. There's even an emoji for them: 🍥 ! And unlike the other toppings mentioned above, these are exclusively used in broth dishes, so they're novel too.

Narutomaki is pretty healthy, too. One of these scrumptious cakes has less than 70 calories and no fat. That's right, NO fat.

The majority of the calories come from proteins, while a smaller amount comes from carbohydrates. It does have quite a high sodium content, unfortunately, but that isn't unhealthy since the fish cakes themselves are quite tiny in size.

Where to buy? Where to get?

Many Asian grocery stores will have a section for fish cakes and kamaboko. Do have a look at your nearby Asian supermarket to see if they have any stock for narutomaki.

Otherwise, they can be bought online to be delivered to your doorstep from stores like Amazon. You may find that the shape or pattern of the kamaboko will be slightly different from the representative naruto surimi. This depends on the manufacturer’s design.

However, we still prefer homemade. This is for a lot of reasons.

For one, store-bought Japanese fish cakes are usually packed full of preservatives and use fish that isn't sustainably caught. Bought fish cakes also acquire an unpleasantly dry, chewy and bland flavour profile due to their long stint in storage and shipping.

So if you want an iconic and delicious ramen topping which tastes delicious especially when homemade, try narutomaki.

The most important ingredient in naruto kamaboko is, predictably, the fish. White, non-fatty fish filets are used so that the cakes' texture is not unpleasantly oily. They are washed repeatedly to remove some of the fishy odour, which could be overpowering otherwise.

Make sure to get rid of the skin, bones and any fat which could be present if buying the fish fresh. We don't recommend buying frozen fish as the texture could be objectionable when steamed (crumbly and dry rather than luxurious and smooth).

If you are using frozen fish, try thawing it at least six hours before the cooking starts. It will remove some of its water content and keep the texture perfect.

The sugar in the narutomaki recipe might seem superfluous, but it actually helps the roll remain in its gelatinous and cake-like form. It also naturally increases the shelf life of the fish cake. This method was developed before the invention of refrigeration. In this way, it is also like the Jewish gefilte fish.

Generally, other seasonings besides salt are omitted to keep the fish cakes in their background role. If you intend to use them for something else, however, some white pepper can add a unique flavour. It complements the meaty taste without overpowering it.

Mirin and egg yolk are added as binders as well as a general interface for flavour transfer. The former lends a generally sweet and sour taste which is so common in Asian cooking. Meanwhile, the latter aids in developing the shiny, attractive sheen which is characteristic of the narutomaki.

Since each ingredient is so essential, substitutes are difficult to find. Mirin can be substituted for other unflavoured white cooking liquors. However, the other ingredients are very difficult to change without changing the basic nature of the dish.

If you don't have a food processor, don't fret! You can still cook narutomaki. You just need to put in much more manual labour than otherwise.

Using a knife, chop the fish into smaller and smaller pieces. Eventually, you can use the back of the knife to smooth it into a paste.

Mix the spices and other ingredients into this and it's ready to use! Note, however, that this may take longer than with a food processor.

If you want to achieve those perfect scalloped edges like restaurant narutomaki have, use a bamboo mat to roll the log tightly before steaming. Press down hard to make sure the edges are shaped properly, but not too hard to avoid denting the roll itself. 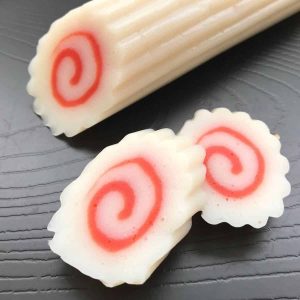 This narutomaki recipe also allows the chef room for creativity in terms of its design. Here, The Chinese Cuisine Youtube channel made one with a yellow exterior by using egg yolk as colouring.

We hope this article helped you learn something new about traditional Japanese noodle toppings. And hey, now you know what Naruto was named after!

Enjoy making narutomaki at home! We hope that you have fun making it, as much as you enjoy eating it right after. Itadaki-masu!