Ozoni mochi is perfect for whenever you need a pick-me-up dish that offers a unique chewy texture in a tasty soup! This Japanese concoction is believed to bring good luck.

It is a New Year dish that the Japanese eat to get through the cold New Year's Day. However, that doesn't mean you can't eat it all year long!

You don't even have to be in Japan to enjoy this tasty and filling soup, as we'll show you how to make ozoni at home!

Interestingly, different households have their own unique way of preparing this traditional dish. One is not quite like the other, making it even more special.

So here's an opportunity for you to put your own spin on it too. Just read on and let us guide you in making your version of this Japanese delight!

Ozoni is a traditional Japanese soup that usually contains mochi, vegetables, seafood, and meat. The Japanese traditionally eat this soup in the morning on New Year's Day. The ozoni soup meaning is an offering to the Gods on New Year's Eve to pray for health, prosperity, and happiness.

The tradition began in the Muromachi period (1336-1573) and was believed to bring good luck. However, the dish itself has existed long before that. Samurai families served it as a side dish during banquets for the samurai warriors back in their day.

Each ozoni ingredient's meaning is unique:

You can find a lot of unique versions of the dish in the different prefectures in Japan. For instance, the Iwate Prefecture uses walnut sauce in the dish. Alternatively, the Nara Prefecture often bakes the new year mochi and mixes white miso with kombu broth. Occasionally, the rice cakes are removed from the soup and dipped in kinako (soybean flour).

In Kagawa prefecture, the rice cakes are filled with bean jam. And similarly, the Tottori Prefecture enjoy it with adzuki red beans. Therefore, they call it 'Adzuki Zoni', and in some regions, people consider it 'Oshiruko' due to their similarity.

A tasty variation of this dish is 'Egg Zoni', which contains egg. You can casually find it in Japanese cake cafes and enjoy it anytime besides New Year.

There are two main styles in the preparation of Ozoni: the Kanto style and the Kansai style.

The eastern side of Japan, such as Tokyo, adopts the Kanto style. Kanto Ozoni has a clear broth made from dashi. Besides that, the Kanto style usually uses square rice cakes representing "defeating bad things".

The Kansai style of Ozoni originates from Kyoto and can also be called Kyoto Ozoni. The western side of Japan also uses this style of making the dish. It has white broth made of miso. Conversely, the Kansai version of the dish incorporates round rice cakes, which brings the meaning of "family happiness".

However, there are also other regional styles, such as Chugoku and Kyushu. Thus, we highly recommend trying as many versions of the soup as possible! Plus, wouldn’t it be a fun adventure to try and eat every single regional Ozoni?

The main difference between Kyushu and Kanto Ozoni is the broth and the toppings adding. For this reason, they also slightly differ in taste.

The Kyushu version uses rectangular and square rice cakes that are either toasted or baked. Additionally, this version usually contains a piece of fish as a part of the dish.

On the flip side, the Kanto style does not contain miso. This particular style also includes the addition of kamaboko (steamed fish paste).

The Ozoni tastes sweet and salty in general. However, you can never precisely describe the flavour since it varies depending on the style and ingredients used.

The ones with white miso soup are more on the sweeter side and are less salty. This is how the Kansai version tastes in general. However, using light miso in the Kyushu style can make it saltier. On the other hand, the Kanto style has a more umami flavour due to the dashi soup base.

A serving of this special New Year soup has about 100-150 calories depending on its serving size. It is the perfect dish if you ever need a healthy and tasty soup to start off your year!

To make Kanto ozoni, you will need the following ingredients for the broth:

To make Kyushu ozoni soup broth, you will need the following ingredients:

Other ingredients you'll need to prepare this traditional Japanese dish are:

One of the best substitutes for dashi is mentsuyu. It is made from dashi and other seasonings, which work great for traditional Japanese soup dishes.

However, you shouldn't add too many additional seasonings. Otherwise, the dish would taste too strong. Another good alternative is Shiro-dashi which is very similar to mentsuyu.

You can use soy sauce to stand in for the salty and savoury miso flavour. However, soy sauce will affect the texture of your dish. This is because miso paste is creamy, yet soy sauce is thin and watery.

You may also use fish sauce to replace miso paste, but this alternative is also watery. It may also give off a more robust flavour than miso.

However, you can use water to replace sake if you cannot use alcohol in your cooking. Similarly, the ratio is also 3:1 to replace mirin with water and sugar. You can also get Honteri Mirin by Mizkan, which does not contain alcohol.

Both Kanto and Kansai versions of the dish use Yuzu peel as garnish. It gives a refreshing aroma to the soup!

Other toppings that pair well with Ozoni are kamaboko (steamed Japanese fish cake) and seaweed. You can also add oysters or dried anchovies like Shikoku style to make it Hiroshima style.

Egg as a topping is always a good idea, be it hard-boiled, soft-boiled, or raw. You can also enjoy this new year mochi soup dish with salmon and salmon roe as how they do it in Niigata.

Indeed, you can never go wrong with whatever you choose. Each additional ingredient will surely surprise you with new flavours and textures.

For storage, you can keep the soup in an airtight container and refrigerate it for up to 2 days. You can also portion it into several containers and freeze them for up to 3 weeks.

If you're adding tofu, make sure you take out the tofu before freezing it. Reheat the soup over medium-low heat in a pot once ready to eat. 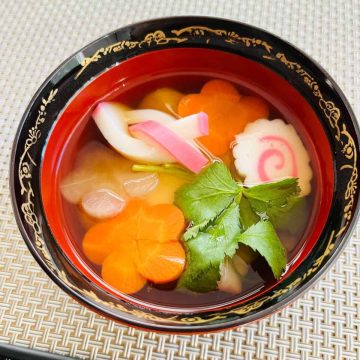 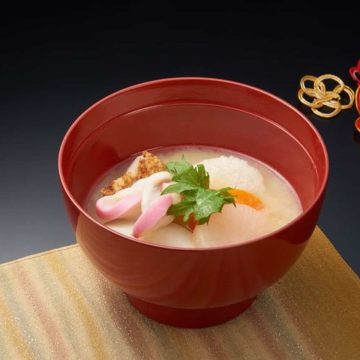 Here is an easy ozoni recipe to make Kyushu style new year mochi. It is a little similar to the Kanto style with a few tweaks such as the addition of a miso paste that makes the broth white and leaving out the soy sauce and sake. It is a new year's dish, but you can eat this Japanese delight any time of the year!
Author: Serena Josrin
No ratings yet
Print Pin
Course: Soup
Cuisine: Japanese
Keyword: soup
Servings: 4 servings
Calories: 78kcal
Prep Time: 5 minutes
Cook Time: 10 minutes
Total Time: 15 minutes

For the Kyushu Ozoni broth:

As you’ve read, this Japanese soup recipe is versatile and welcomes your own twist to it! You can choose to omit and add ingredients that you like to your own homemade version.

Retrouvaille on Youtube made an ozoni video recipe in which he used shimeji mushrooms, Chinee cabbage and green onions. In addition, he also covered some cultural tidbits about this classic dish in his video, which we found interesting! So, do check it out!

We hope you enjoy this unique dish and put your own spin! Don’t forget to share how they come out and tag and follow us on Instagram @honestfoodtalks. And check out the rest of our website for more recipe ideas!