Raindrop cake is a unique, translucent, and low-calorie Japanese dessert that grew in international popularity. This cute water droplet-shaped treat is served in many restaurants around the world and we could say that it’s still well-liked by many. A timeless traditional Japanese dessert!

If you have ever wondered how this dessert of Japanese origin is made, or have been curious as to its different variations, you have come to the right article.

We will also be sharing a traditional Japanese raindrop cake recipe that you can easily recreate at home. We’ll even show you different ways to level up this classic recipe!

What is a raindrop cake?

The earliest form of this delicacy is a Japanese mochi called Shingen mochi. Traditionally, these are popular rice cakes from Japan’s Yamanashi Prefecture that are made from glutinous rice flour and sugar. It has a soft texture and chewy consistency.

They were originally made as a type of emergency food by Shingen Takeda, a Sengoku Daimyo. This became a festive food to eat during Obon in Japan.

As time passed, locals in Hakushu-cho, Hokuto City decided to incorporate the region's fresh spring water into this dessert.

The current version that we know can be considered an evolution from its traditional form. It is now a transparent and crystal-looking sphere and is made with agar-agar instead of glutinous rice flour.

It is also more commonly known as mizu shingen mochi, which literally means water cake. We will use these names interchangeably in this article. What has stayed the same are the typical toppings served with this dessert, which are a sprinkling of kinako powder and a drizzle of kuromitsu.

By itself, raindrop cake does not have any flavour. However, the toppings (or the fillings) are what give it its flavour.

If you’ve ever played out in the rain when you were kids, you’ve probably also tried eating raindrops. Or what that was just us? This fun dessert will take you back to childhood and make you feel like you’re eating raindrops. It is light, refreshing, and melts in your mouth!

How many calories does it contain?

You might be surprised to hear that simply speaking, raindrop cake itself contains almost zero calories! Its calories come from the toppings or fillings, which we will get into in the later sections of this post.

The dessert shop in Japan credited for introducing mizu shingen mochi substituted glutinous rice flour with agar-agar, making it healthier and lower-calorie. As it is light and refreshing, it makes for a perfect summer dessert, which is also when it is available.

There are only two ingredients needed for the water cake — water and agar-agar.

If you live in Japan and have access to water from the Akaishi Mountains (otherwise known as the Southern Alps of Japan), that’s perfect! That is exactly the water used by the dessert shop. What’s special about this water is its naturally slightly sweet taste, which can be tasted in the Japanese raindrop cake.

Since not all of us can easily buy water from those mountains, the next best thing to use is mineral water. It will result in a crystal-clear water cake. Filtered water can also be used but might result in a cloudy-looking cake.

Agar-agar (or simply, agar) is fibre that’s derived from seaweed, specifically red algae. It is a healthier and vegetarian alternative to gelatin, which is from animal sources.

Agar comes in different forms — powder, bar, strips, among others. In Asia, it is widely used to make various desserts such as puddings or custards. Some bubble tea shops would also use agar jelly as a low-calorie boba topping.

For the raindrop cake recipe, the powdered form is used. It is also worth mentioning that agar is odourless and tasteless, which is why the flavours do come from the toppings.

As for the toppings, the ingredients needed are kinako powder and kuromitsu.

Kinako powder is a type of Japanese roasted soybean powder that is a standard topping for Japanese sweets like mochi. It is also used in baking bread, cookies, or cakes. It can even be added to fruit smoothies as a substitute for peanut butter.

As to its taste, it is somewhat similar to peanut powder as it has a nutty flavour. It is also rich in essential vitamins and minerals and is a good source of plant-based protein.

There are many Asian stores or online shops these days selling kinako powder, hence, it is easy to obtain to make the raindrop cake. Here’s one that we recommend;

Kuromitsu (brown sugar syrup), when literally translated, means black honey. Commercial bottles of kuromitsu are made from a Japanese brown sugar called kurozato mixed with honey. They are readily available in Asian stores and online as well.

We have also seen homemade versions of kuromitsu made using muscovado sugar (or dark brown sugar) and water, so that’s also an alternative if you want to make it yourself.

If you want to achieve the perfect texture and consistency of an authentic raindrop cake, we recommend using agar as it is still the best way to go!

An alternative to agar would be gelatin, but keep in mind that there will be differences in consistency and texture. Agar would result in a firmer texture, which is crucial for the mizu shingen mochi to hold its form.

As we have also previously mentioned, gelatin comes from animal sources. If you prefer something vegetarian, it is better to use agar.

Different brands of agar-agar powder can create different transparency levels. Sometimes you can get a slightly cloudy outcome, so it may require some experimenting with the brand you use.

When making this dessert treat, the only tool that we need is the mould, which should be in the shape of a half-sphere. There are a ton of moulds available online on Amazon or in stores.

You even have different options for the diameter — so the size of your cake can totally be up to you! We find that this round ice cube mould (see below) is the perfect shape and size;

If you’re thinking of making a filled cake such as the strawberry or cherry blossom raindrop cake, we also recommend having tongs as it will help in handling and placing the delicate flowers or the fruits inside the mould. 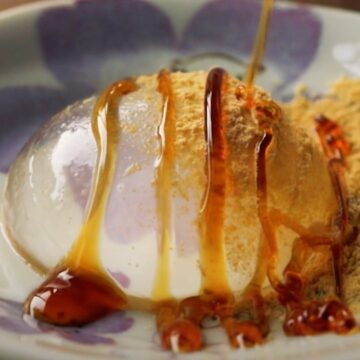 The Youtube channel ‘Baking With Yingnan’ made a good video recipe where she made the cake with sakura cherry blossom. This is a great reference for anyone who wants to make variations with fruits such as strawberries, cherries, and more.

A common question regarding this dessert recipe is whether there are other versions that you can try or make?

YES! Since the Japanese raindrop cake has been around for some time, different flavours have cropped up over the years.

Some of the more intriguing flavours that have caught our eyes are the rose and matcha ones from Melbourne’s Cafe Lafayette, and Hong Kong’s Whatever Bar & Restaurant’s mizu shingen mochi with sake and berries (blueberry) sauce.

Other variations are ones that are filled with sakura cherry blossoms or fruits such as strawberries, oranges, or peaches. Not only are they popular; they’re visually pleasing too!

Have you tried making raindrop cake at home? Share your photos and tag us on Instagram @honestfoodtalks! We’d love to see your creations.