Tsuyu sauce, or mentsuyu, is a soy sauce that is mixed with Japanese sake. If you are a huge fan of Japanese noodles, you probably have tried this famous Asian condiment. That's because Japanese cooks often use it as a soup base.

Most people love this light dip due to its mild, savoury flavour, which doesn't overwhelm other ingredients.

As a big fan of Japanese cold noodles in the summer, we had to figure out how to make this at home! We've nailed our perfect version of this dish.

If you need a vegan version, we've also included it! Continue reading to find out how to make tsuyu sauce so you can use it in your cooking.

What is Tsuyu sauce made of?

Tsuyu sauce is made of soy sauce, mirin, cooking sake, sugar, and dashi. It can also sometimes contain mushrooms or other additions.

If you are wondering what dashi is, it is a broth that consists of a combination of bonito flakes and kelp. Bonito flakes are dried, smoked and fermented tuna fish. It is a crucial component of Japanese cuisine. However, there are also vegan versions of dashi which do not use bonito flakes.

The Japanese word mentsuyu has two parts: 'men' means noodles, while 'tsuyu' means stock. It is commonly known as a noodle base. Japanese chefs will use it to season noodle dishes like soba, udon, and somen. However, using it for dishes as a dip has become common nowadays. So, it's a versatile item that pairs well with any cuisine. For example, Japanese people often pair it with deep-fried tempura dishes!

We don't know who, when or how this refreshing side first came to be. However, historians have recorded that the Japanese paired their food with such condiments as early as the 8th century.

So it's clear that this is one soup base that has stuck around! Another interesting fact is that in Japan, the east side tends to use a bonito-rich version of the condiment while the west prefers more kelp in their dip.

But whether you're more of a bonito or kelp fan, the best tsuyu sauce is one you can customise to your liking. So, add sugar or chilli if you prefer it slightly sweeter and spicier.

This Japanese soup base tastes distinctively sweet with a tinge of saltiness. The cooking process removes the sharp taste of the shoyu, resulting in a mild, light flavour.

However, you might come across mentsuyu, which is quite salty. Kado, a term that you may find in Japanese culinary cookbooks, refers to that salty flavour. Some companies make their dip with more kado, with an intense flavour. This variation is to differentiate their brand, but also because different concentrations of the Japanese soup base suit different dishes.

This difference in strength also means you should dilute store-bought tsuyu sauce as you like to use it for noodle broth. Unfortunately, it also means that if you're searching for a store-bought version, you might have to sample a few different brands before finding the one you like most.

Is it the same as soy sauce?

Mentsuyu is not the same as soy sauce, as it is more concentrated. It is a mixture of dark shoyu with other ingredients such as mirin, dashi, sweet sake and sugar. However, shoyu is usually eaten on its own without mixing other ingredients.

Due to this mix, you can usually pour some shoyu from a bottle and eat it as a light dip. But tsuyu sauce, on the other hand, may require diluting with water due to its intense flavours.

How to use Tsuyu sauce

We usually find mentsuyu in noodle broth, but tsuyu sauce uses vary. Firstly, you can dilute it to create a base for your soba or udon noodles. Secondly, you can use it as a seasoning in place of shoyu. Additionally, you can also add ingredients such as wasabi or grated ginger to layer your dip.

Mentsuyu is often eaten with soba noodles which are Japanese buckwheat noodles. The thick strands of noodles soak up the light condiment beautifully. You can either eat the soba noodles hot or cold.

Many people prefer to have soba noodles cold since the consistency of buckwheat noodles changes when cooked. Therefore, if eaten cold, you will usually see people dip their noodles into a mixture of wasabi, green onion and mentsuyu dip before consumption.

But if you don't like soba noodles, you can also use ramen noodles or even cook tempura udon, as this condiment creates a delicious soup base for any kind of dish.

How to use bottled Tsuyu sauce

If you've decided to buy the bottled version of this soup base instead of cooking your own, you must first check whether you need to dilute it before use.

Most brands in the market, such as the hon tsuyu sauce, are relatively concentrated and need water. In addition, manufacturers may not create this soup base the same, so the number and concentration of ingredients in it can vary the sweet or salty kick of the dip.

If you've bought your condiment and are unsure how much to dilute it by, a general rule for a cold soba tsuyu sauce recipe is to keep the broth ratio at 1:3. Therefore, you'll need 1 cup of water for ⅓ cup of tsuyu sauce.

Hot noodle soup bases require a ratio of 1:8 or one cup of water for every ⅛ cup of the mentsuyu. For those who prefer homemade versions, refer to our recipe in the later sections and dilute it using the same ratios.

While bottled versions are convenient for skipping the cooking process, you might not get the flavour you want. With a homemade version, you can choose to make it sweeter or saltier. Additionally, mirin, the sweet Japanese rice wine found in the Japanese soup base, loses its quality after two months.

So while you can freeze your store-bought mentsuyu to maintain the flavour, you won't be able to obtain a similar taste as when you first bought the bottle. That's why it's better to make your own version!

It is best to use dark shoyu to obtain a more intense mentsuyu flavour. While you can substitute it with light shoyu, it will result in a bland condiment.

Bonito flakes are made from tuna fish that has been smoked, dried, and then fermented. The unique cooking processes create a smoky umami taste, giving the soup base its richness.

If you prefer a vegan version, use shiitake mushrooms. It will provide the same depth to the mentsuyu and taste equally good.

How to make vegan tsuyu sauce

If you require a vegan tsuyu sauce, you'll need to substitute bonito flakes (tuna fish) in the condiment. It's pretty simple. You'll need dried shiitake and kombu in addition to mirin and sake.

The basic formula for a tsuyu sauce substitute is 10-part dashi or shiitake mushroom stock, 1-part soy sauce, 1-part mirin, and ⅓ part sugar. Mix everything, bring it to a boil and then let it simmer overnight.

You can also skip the mushrooms and make a kombu tsuyu sauce. To do that, make a dashi dip by boiling 10g of dried kombu in 1000 ml of purified (filtered) water. The basic formula to create perfectly brewed kombu dashi is 100:1. 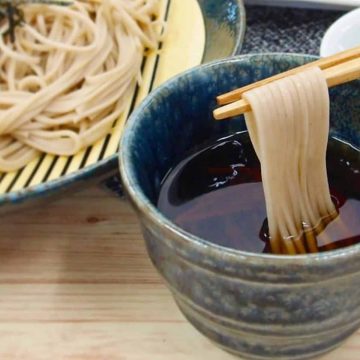 Mentsuyu is a refreshing dip that tastes wonderful when paired with noodles. It's not difficult to recreate, so you can always have a bottle on hand in the fridge at home. Here's our recipe so you can make your version of a tsuyu dipping sauce. For a vegan version, refer to the sections above.
Author: Juliet Huang
4.84 from 30 votes
Print Pin
Course: Condiment
Cuisine: Japanese
Keyword: sauce
Servings: 10 servings
Calories: 91kcal
Prep Time: 10 minutes
Cook Time: 10 minutes
Total Time: 20 minutes

You can also try substitutes in your home-cooked mentsuyu: sugar for mirin and white wine for sake. The mixture yields an almost similar taste.

We hope you have enjoyed making mentsuyu, an umami condiment that works for almost any Japanese noodle dish! For more unique Asian dishes and delicious condiments, follow us on Instagram @honestfoodtalks.