Q&A, Through the Kitchen Door

We spoke to Dora about Pea Shoot Feasts to learn about how she’s running a sustainable food business in London.

1) Who is behind Pea Shoot Feasts?

I am Dora, the woman behind Pea Shoot Feasts. I’m 25 and I am a self-trained vegan chef living in Hackney. Although I run the show alone, I have a lot of help and support from friends and family, especially my partner who is a gardener and avid vegetable grower-we do a lot of recipe creation together. I rely heavily on the help of my friends when running events, taking photos and managing my website. 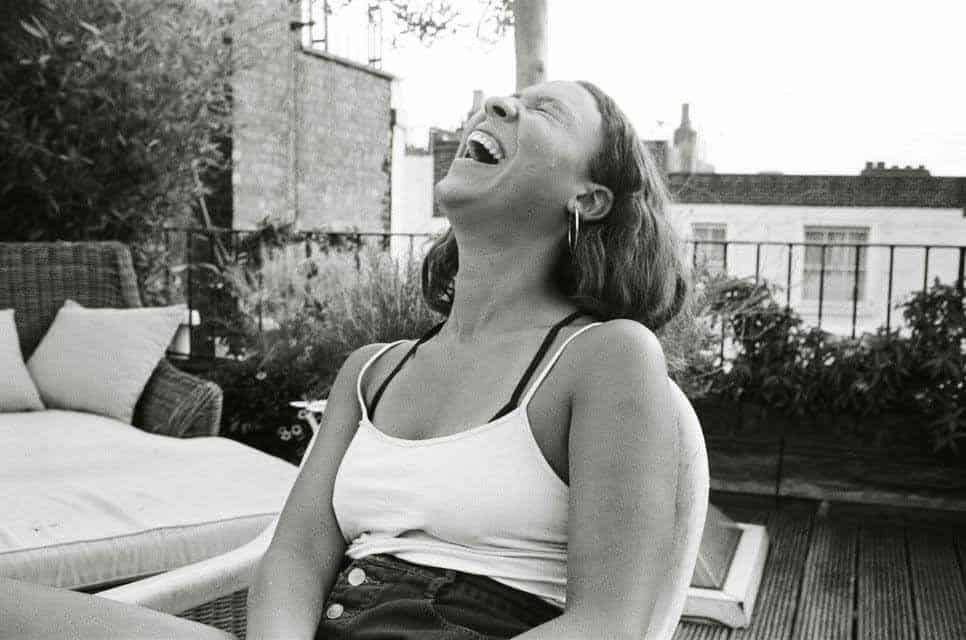 I moved to London from Oxfordshire a few years ago and worked in events management and music before deciding to pursue food as my career. I’ve always found great joy in eating and cooking. I grew up in a small village and my mum always had a vegetable garden, instilling in me an interest in food and environmentalism from a young age. A childhood moving between Jamaica- where I was born- and the Cotswold countryside has equipped me with an adventurousness with flavour, and an appreciation for fostering community and connection through meals. Alongside running Pea Shoot, I am studying an MA in Food Anthropology and I am a passionate feminist and environmental activist.

2) Where did the idea for Pea Shoot Feasts come from?

I started Pea Shoot with a close friend of mine, and it began as solely a picnic business. The idea stemmed from our shared love of the summer, of eating and of being outdoors. Living close to two of East London’s best parks- Victoria Park and London Fields- we found ourselves spending most of the summer having picnics, and we realised how lucky we are to live in a borough with so much green space available – sometimes we would spend all day outside, eating lunch and dinner on the grass and drinking and chatting into the evening.

However, we were frustrated by the lack of exciting picnic food we were finding in supermarkets. Being one vegan and one vegetarian, we often found ourselves eating mediocre falafel and plain salads. On top of this, we realized how much waste was generated from ready to eat food- two or three bags of single use plastic and dirty wrappers could be generated from one meal. So we decided to start making plant-based picnics and delivering them to people in the park. 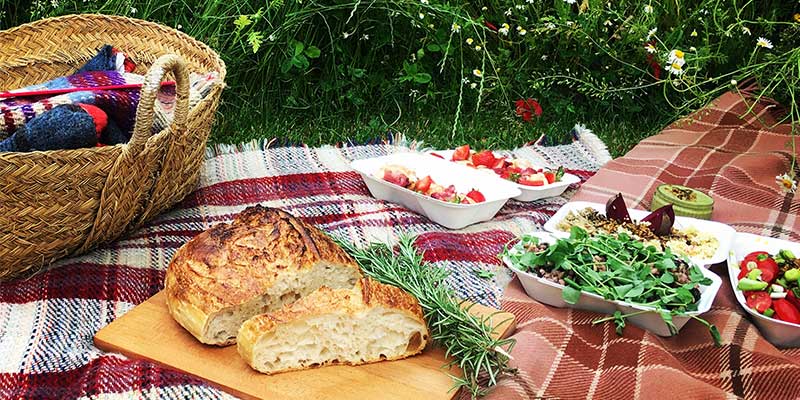 Our picnics would have a focus on tasty and creative dishes such as vegan tarts and quiches, interesting salads and fresh and exciting foods that people might not have tried before. We also wanted to make the picnics affordable, and as environmentally conscious as possible, which meant using minimal packaging- all compostable- no animal products, seasonal and locally grown ingredients and delivering the picnics on foot or by bike. We had a great time, and people loved the food we were making, so when the summer ended, we starting doing supper clubs and then began to get catering jobs. 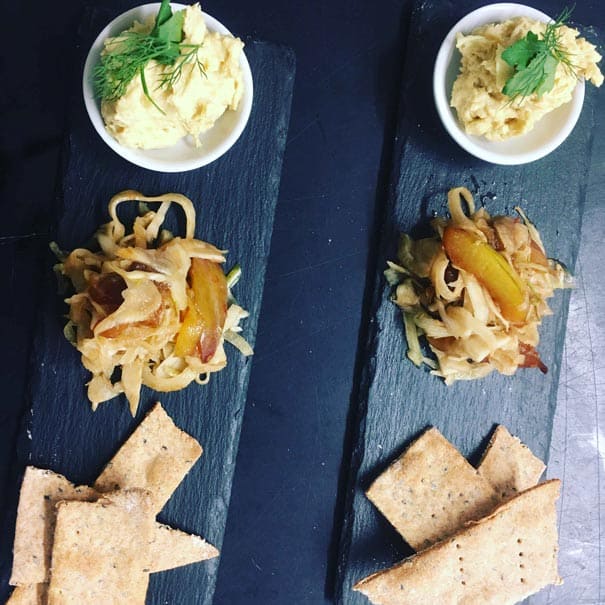 Now I hold supper clubs every few months, which consist of a three-course meal in a special East London location. The menu is comprised of all British seasonal ingredients, but the food I make is not typical British food. I take a lot of inspiration from Mediterranean and Caribbean flavours. The focus is always on minimising waste and shining a light on the huge variety of food that grows in the UK.

In the summer, the picnics are still a big part of Pea Shoot, and you can order one to any park or garden in East London. My friend has since moved on to pursue another career, but remains someone I bounce ideas off.

Pea Shoot Feasts is about addressing global issues through food and connection. My main motivation is encouraging sustainable food practices that minimise waste and lower carbon footprints. By bringing people together over seasonal plant-based food made from locally sourced ingredients, I aim to encourage conversations about the food system, waste and inequality, whilst showing people the delicious possibilities of a vegan diet. I want people to reconnect with where their food comes from, tune in to seasonal patterns, and understand how their choices can be a force for environmental and social good.

There is no typical day at Pea Shoot, as the work is so varied. It could be anything from prepping and packing picnics, doing some pickling or making pastries. In my downtime, I like to experiment with recipes – I often choose an ingredient or vegetable that I don’t know much about and play around with different ways of preparing it. 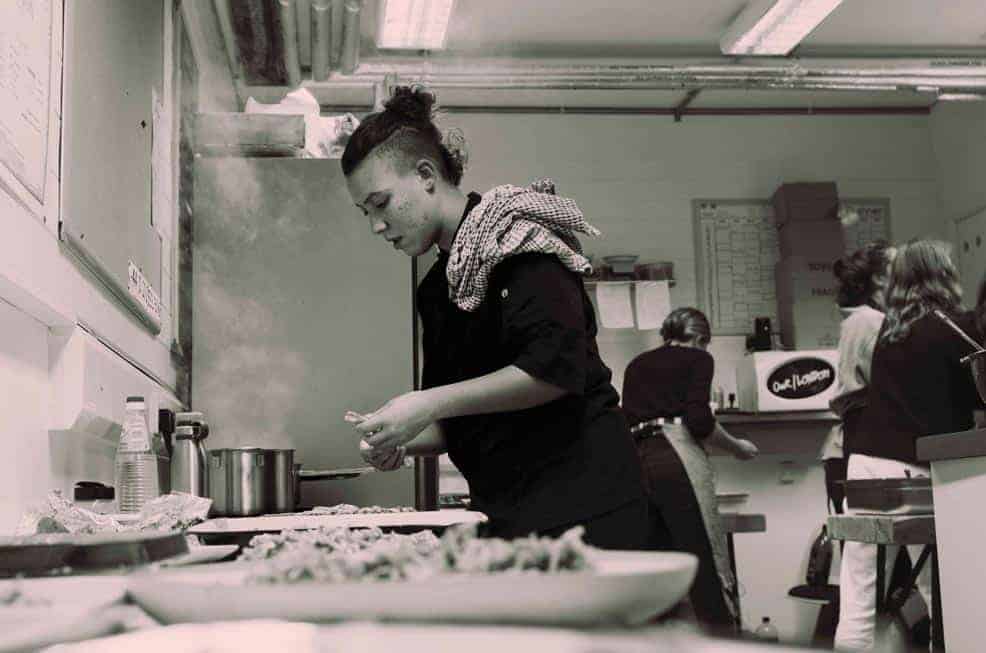 5) What’s the best thing to order from Pea Shoot Feasts?

My dishes change all the time, depending on the season. At my supper clubs, there is a set menu, so you’ll just have to trust me! I love pickles and chutneys, and will usually put one on the menu- I’d always give that a try, as it will be something unusual. I also make a really tasty pink aioli, which makes an appearance in the picnics in the summer. I take a lot of time creating my menus, to make sure that they show off the season’s fruits and vegetables at their best. I source most of my produce from a greengrocer on my road called Bill Hall. It’s family-run, and they stock their shop from their organic farm in Kent, so it’s really good quality.

6) Is there anything else you’d like our readers to know about you?

I run supper clubs and clothes swaps, make and deliver picnics in the summer, and provide catering for private and corporate events. I even pop up at food markets sometimes. Get in touch if you’re looking for a caterer that puts sustainability first, and follow the Pea Shoot socials to keep up with what’s happening next! 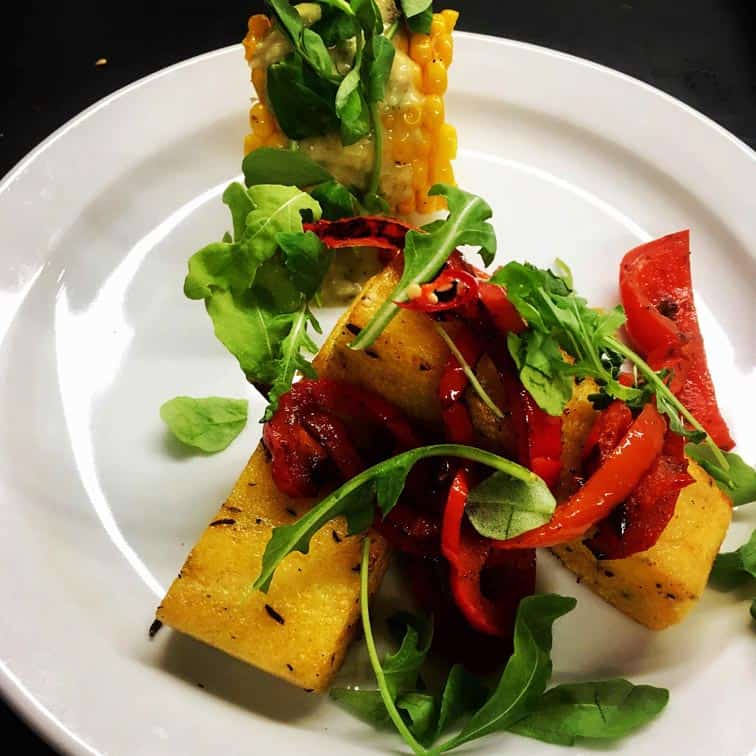 7) Where is Pea Shoot Feasts located?

I cook at my home in South Hackney. Pea Shoot is portable, and you’ll find us at different locations around East London.

Being environmentally conscious, Dora has created a budding business which puts sustainability first without comprising on delicious and new flavours. Order vegan picnics for delivery or sign up to Dora’s latest supper club on their website.

After putting business on hold during lockdown, Pea Shoot picnics are up and running again, delivering seasonal vegan picnics to Hackney parks and gardens. Order one here.

Interested in more female entrepreneurs making a name in the F&B industry? Read about Sarah Hogan next.

Honest Food Talks May 19, 2020
Through the Kitchen Door

Rambutan vs Lychee, What’s the Difference?