The countdown to the end-of-year holidays always has people getting creative with festive decorations and food, both in the shops and in the kitchen. But what about a beverage that can go with the cuisine and be just as aesthetically pleasing on the table?

A lot of answers will be mulled wine, eggnog or even peppermint hot chocolate. But another sweet drink that is bound to be your new addiction this year is Bojicha (ぼじ茶).

One day in my kitchen, the idea to create Bojicha was born from an intentional mix of Hojicha, the Japanese roasted green tea and the creamy Irish liqueur, Baileys. Combining the two resulted in a cool-esque flavour to savour and enjoy. Since its creation, Bojicha has become a delicious staple for the people I’ve introduced it to. And now, I hope you can enjoy this creamy, smoky beverage too!

From these two main ingredients, Bojicha was inspired to bring the flavours of Autumn (from Hojicha) and Winter (from Baileys) together. Along with a scoop or two of vanilla ice cream and a splash of milk, the smooth, creamy taste of Baileys and the smoky, sweet flavour from Hojicha blends so well to make Bojicha a beverage that is irresistible to anyone!

The History of Baileys and Hojicha

Baileys is an alcoholic beverage made in Dublin, Ireland back in 1974 by two men who wanted to make a drink that “didn’t taste punishing.” It’s a mix of vanilla, cocoa and Irish whiskey that blends into a creamy flavour and has a high alcohol volume of 17%.

Over the years, Baileys has been often consumed and mixed with other drinks and desserts such as coffee, tea, cheesecake and even Guinness, it also has a range of flavours that many consumers have enjoyed. In the UK, it is very popular to have a bottle during the end-of-year holidays in households especially among Caribbean families where they are likely to have at least one bottle in their liquor cupboard all year round.

Hojicha on the other hand is only getting started to get more recognition as Baileys. In the 1920s, a tea merchant from Kyoto, Japan tried to make the most of the leftover leaves and twigs and began roasting them over a porcelain pot over charcoal. Thus, Hojicha was created.

Compared to its popular counterpart, Matcha, the roasted green tea separates itself from other Japanese tea for having little to no bitterness. It is roasted and once infused, has a sweeter flavour to it. Hojicha has been blended into desserts such as ice cream, pudding and cakes. It is usually served and consumed during the evenings before bed for children and the elderly.

Both are beloved in their countries of origin and upon mixing the two for a drink one day, it has produced a sweetening and rich taste that surprisingly hasn’t been made before.

Bojicha is highly recommended for sophisticated drinkers who love beverages on the sweet side with a hint of a liqueur taste. This would go well for people in their late 20s to mid-30s who want an impactful and flavoursome beverage that will have anyone taste the spirit of these two seasons simultaneously.

Imagine just being at a lounge bar or a friend's get-together enjoying Bojicha on a nice Autumn or Winter’s night, just sitting back and relaxing with others while enjoying the creamy taste of the beverage. 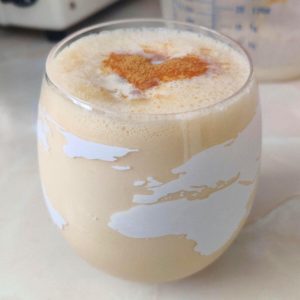 In just under 20 minutes or less, this quick recipe will help you to make Bojicha and relish in the combined tastes of the nutty essence of Hojicha and the rich chocolate texture of Baileys. It can only work as a cold beverage, not hot, as the alcoholic volume of Bojicha heats the drinker’s body. Take a look below at how you can make your first Bojicha in your own kitchen.
Author: Nyasha Oliver
5 from 2 votes
Print Pin
Course: Drinks
Cuisine: Fusion
Servings: 1
Calories: 270kcal
Cook Time: 5 minutes
Total Time: 5 minutes

What does Bojicha go well with?

When having a Bojicha, the following food and desserts would complement the beverage well.

How did your homemade Bojicha turnout? If you’ve tried making this delicious beverage, please share with us a photo of your creamy, smoky Bojicha beverage by tagging us on Instagram @honestfoodtalks! We would love to see your delicious beverage and what you enjoy it with!

Try out Misugaru Latte, a popular Korean diet drink next.