Tang Yuan is a Chinese dessert made of glutinous rice flour in water, containing a sweet filling and usually served in a hot liquid of some kind. This article tells you all you need to know about this traditionally favoured sweet treat.

We have also included our own tried and tested home cook recipe, which is traditional and straightforward. Our tang yuan recipe below described steps for making glutinous rice balls with peanut and black sesame seed filling. However, you can follow the same formula for making other filling flavours like lotus seed, red bean and taro paste! But first, let's talk about this dessert and its significance.

Tang yuan are sweet soup balls made using glutinous rice flour and water. You can stuff glutinous rice balls with various sweet fillings, such as peanuts, sesame seeds, lotus seed paste and sweet red bean paste (anko). More people have filled these with creative flavours such as taro paste, chocolate and even durian!

They can be deep-fried or boiled in water or sweet, sticky syrup to create a genuinely unmissable dessert.

Our recipe reverently details all the traditional fillings and methods. However, necessity is the mother of invention. If you can't find or use a conventional ingredient due to availability, budget, or health issues, this recipe will also tell you a few substitutes you can use.

Tang Yuan are an important and iconic festive dessert in China. The round shape of the dessert symbolizes togetherness, and its name sounds similar to the Chinese word for union. For these reasons, Chinese families will often eat and cook together during festive times.

Usually, Chinese families will consume it during the Lantern Festival. However, you will also find it at birthdays, reunions, weddings, and during the Dōngzhì (winter solstice) festival.

It used to be called 'yuan xiao', which meant "first evening", referring to the first full moon after Chinese New Year. Apocryphally, during Yuan Shikai's rule, he had the name changed as yuan xiao (元宵) sounded similar to the words for 'remove Yuan' (袁消).

Thus, he changed the name to Tang Yuan (汤圆), which translates to 'soup balls'. Poetic. 'Yuanxiao' as a dessert still exists, but these two are markedly different from each other.

Traditionally, this dish is boiled in water and filled with something sweet. The colour of the balls is traditionally white, but in modern times, it can be dyed any colour with food colouring, usually contrasting with the filling. The boiling gives the wrapper a delightfully slippery and chewy texture.

The filling is usually crunchy or crumbly to contrast the wrapper's texture. If fried, the wrapper is crunchy and crackly, while the filling may be smooth and sweet. If boiled in syrup, the wrapper takes on a sugary sheen and becomes very sticky. The flavour of the rice flour wrapper is simple but uniquely addictive. We believe you are sure to enjoy it if you give it a try!

How Do You Eat It?

Traditionally, Tang Yuan is served in a warm soup made using ginger and brown rock sugar. The soup is sweet and mildly spicy, complementing the umami-rich filling. In addition, the warm tang yuan soup helps to ensure that the filling inside is smooth and liquid to complete the slippery wrappers.

To eat it, use a soup spoon to pick up a single dumpling and use chopsticks to bite into it. Drink the syrup in case the flavour of the filling becomes too overpowering. Another less sophisticated way is to eat the dumplings with a spoon all in one bite. This does require a significantly larger appetite, however!

A single tang yuan with filling contains around 70 calories. An unfilled one contains approximately 30 calories. So you can reduce about 50 calories per dumpling by reducing the sugar and filling, which adds up quite a lot.

Unfortunately, since glutinous rice balls are a festive dessert, this dish can be high in calories. However, it is still a healthier Chinese dessert than snow skin mooncakes eaten during the Mid Autumn festival. Try these winter solstice sweet rice balls instead if you want to make a relatively low-calorie Chinese dessert!

Many people believe that this dessert is similar to mochi. Although the ingredients of both dishes are identical (namely glutinous rice or rice flour and water), the preparation, cultural significance, and flavour differ widely. In fact, mochi is usually made with cooked glutinous rice instead of rice flour.

Mochi dough is beaten with mallets, making it light, creamy, and airy. You can eat mochi fresh or cooked. On the other hand, you cannot eat Tang Yuan raw as it is kneaded minimally. Its texture is not light but instead dense and slippery.

It is served in broth to contrast with the fillings and wrapper. Mochi can be served in broth, as it is during New Year (a savoury vegetable broth called ozouni is used). It can also be served raw or cooked dry, however.

Mochi fillings are generally not runny and can hold their shape, and mochi itself can be shaped in several attractive ways. On the other hand, Tang Yuan is shaped like a ball, and dumplings with different shapes are completely different dishes.

The Chinese dish most similar to mochi is, in fact, muah chee (麻糍). This is made with shallot oil and glutinous rice flour. It is then topped with crushed peanuts or sesame seeds. It is a popular street food served with toothpicks and not in a broth.

Therefore, mochi is entirely different from Tang Yuan, and the two should not be confused.

This Chinese glutinous rice ball snack has many fillings and flavourings. Traditionally speaking, the most common fillings are peanut and sesame seeds. However, a plain tang yuan recipe with no filling is typical since it requires less time, effort, and ingredients. Filling-less dumplings have the added advantage of being lower in calories.

Tang Yuan savoury fillings are also traditional, although not eaten as a dessert for apparent reasons. Instead, savoury minced meat and mushrooms are commonly found as savoury fillings.

In this recipe, we have chosen two of the most famous and accessible to make traditional fillings, sesame and peanut.

The Tang Yuan dough is exceedingly simple to make. It consists of only two ingredients: glutinous rice flour and water. As a result, minimal kneading is required, and the dough requires almost no rest time. This makes this recipe a swift and low effort one.

However, the dough is prone to tearing easily since rice flour (even glutinous varieties) lacks wheat flours' stretchy gluten formations. If your dough cracks while working with it, use a wet fingertip to press the edges back together carefully.

How to Make Colourful Tang Yuan?

The sweet glutinous rice balls are usually white in colour, but they can be coloured to any shade of the rainbow using water-based food colouring in the dough. So if you are worried about the flavour of the soup balls being marred by the addition of chemical colourants, have no fear! You can use many natural colourants to dye your dough to make it as pretty and tasty as possible.

A list of a few natural dyes you can use to colour your Tang Yuan is as follows:

To turn most fresh fruits and vegetables into dye, you need a blender and water. Add enough water to turn it into paste, blend, then add enough for the paste to thin into a watery consistency. Let this liquid rest for ten minutes, then filter and use. This means that you will impart minimal flavour from the produce to the dough.

A few tips to making good Tang Yuan are:

You can store glutinous rice balls uncooked for up to 2 months in the deep freezer and up to 2 days once cooked in the refrigerator. To store them once cooked, put them along with some serving liquid into an airtight container. Make sure they are not touching each other or the walls or base of the container.

Line a sheet tray with parchment paper to store them in the deep freeze. Once assembled, arrange the glutinous rice balls spaced out on the trays and freeze them until solid. Then you can transfer them to an airtight container. You can boil these directly. Do not defrost them. 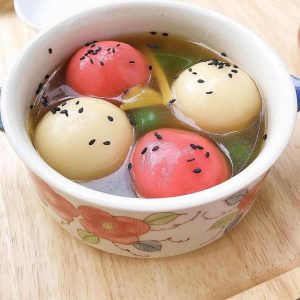 Tang yuan are sweet and chewy spheres of delight that are sure to enchant friends and family at your next gathering! Our Tang Yuan recipe covers how to make ones filled with peanut and black sesame paste. This recipe will make enough dough for 20 glutinous rice balls. There will be enough filling to make 10 peanut tang yuan and 10 sesame soup balls, so adjust the quantities accordingly.
Author: Amaya Oke
4.98 from 43 votes
Print Pin
Course: Dessert, Snack
Cuisine: Chinese
Keyword: dessert
Servings: 20 pieces
Calories: 118kcal
Prep Time: 20 minutes
Cook Time: 10 minutes
Total Time: 30 minutes

For the Tang Yuan wrapper

If you're a first-timer, it may seem daunting to make! However, do not worry as the process, once understood well, is very simple! Here's a video recipe by Xiao Xi Fu Er Youtube channel that shows the whole process of making Tang Yuan from scratch. They use peanut butter for the filling and soup, which we found creative and exciting!

We hope that this article helped you learn more about this beautiful Chinese dessert, Tang Yuan! Traditional Chinese desserts are slowly gaining the recognition they deserve, and you too can be part of this culinary movement. The recipe is easy to make and delicious to eat, so we hope you give it a try!

Are you looking to explore other types of traditional Chinese desserts? We recommend trying to make the aesthetically adorable how to make moon cakes at home!