Monjayaki is wonderfully savoury and earthy street food with equal footing in tastiness and convenience - the cabbage cooks quickly while also being flavourful. In this article, we’re going to dive deep into this, one of our favourite snacks, and answer any questions that you might have.

Our recipe strikes a balance between traditional ingredients and sourceable ones to ensure that your food will be easy and tasty. So keep on reading to see how we’ve struck gold: sharp with Japanese Worcestershire sauce, as well as being salty and earthy thanks to the dashi.

Monjayaki is basic, batter-based street food from the Kanto region of Japan. They’re notable for being a tremendously popular export of Japanese cuisine. Moreover, many cooks worldwide find it an affordable and easy dish to make.

You make the pancake of the dish using wheat flour and dashi, a specialist fish stock. Then, you typically prepare the rest of the dish by using cabbage and seasonings.

Finally, you complete it with a personal choice of toppings or add-ins. However, we found that many recipes recommend toppings that are bright and light. As a result, it helps balance the sharp and acidic body of the snack.

The precursor to this dish is funoyaki. Funoyaki is a batter-only snack that was made and served during Buddhist ceremonies. The addition of assorted ingredients means that the dish we’re cooking today is something more flavour-diverse.

Monjayaki first saw a leap in popularity shortly after the second world war. The post-war period was when money and food were scarce, so dashi with komugiko (wheat flour) made a cheap and filling dish that people were happy to eat en masse.

From then, cooks started adding more ingredients starting with the cheapest first. Vegetables like cabbage were the first - vegetables are typically inexpensive. From there, people would tailor their meals according to their taste.

Hence, this means that the overall flavour of okonomiyaki is generally quite different. When you use water in a recipe, the dish will favour the add-ins in terms of taste. Otherwise, the dish will typically be richer and have more structure if you use eggs instead.

These dishes are tremendously similar. They were both created at roughly the same time - shortly after the end of world war two. The primary difference between the two is the liquid ingredient.

A serving of monjayaki contains roughly 510 calories. It’s a little hard to say, for certain, since this dish varies so much in terms of size and ingredient content.

You can break down the general ingredients of monjayaki into batter and add-ins.

First of all, there’s the flour. Typically, Japanese cooks use pastry flour because of its low gluten content. It makes for a crispy, thin pancake instead of a thick, chewy one. Instead of pastry flour, you could use rice flour or even all-purpose flour if needed. The higher the protein content of your flour, the chewier your monjayaki will be. For that reason, try to get pastry flour.

Next, there are dashi granules. You dissolve these granules to make dashi, which is essentially Japanese soup stock. This ingredient is unique and there isn’t really a substitute for them.

If you use anything other than dashi, you’ll technically be making okonomiyaki instead. If you don’t mind that, you can use any other type of stock granules or cubes, provided you keep the volume of water the same.

Now, there’s the matter of seasonings. Generally, it’s pretty simple: salt, pepper, and tonkatsu sauce. You can think of Tonkatsu sauce like a Japanese Worcestershire sauce. It is fruity and intense, lending a robust flavour to anything it is added to.

Of course, you can use Western Worcestershire instead, though we’d recommend heading to an Asian supermarket to seek out true tonkatsu. The flavour is notable enough that it’s certainly worth seeking out!

Aside from those three seasonings, you can add pretty much whatever you might like. We’d recommend complementing your add-ins and toppings. For example, you could pair leeks as an add-in with garlic granules for an earthy, rich final flavour.

Now, we come to the cabbage. Cabbage is an integral part of this street food and Japanese food on the whole. It can be tricky to know what type of cabbage to use, but we’d simply recommend using your favourite. Personally, we’d recommend trying bok choi in monjayaki - it has a gentle texture and a mild flavour that is truly wonderful.

Finally, we get to agedama. Agedama is fried scraps of tempura batter that add texture to dishes. They are crunchy and savoury, without too much flavour of their own. It might be tricky to source agedama, so perhaps seek out tempura batter mix and make your own at home.

The add-ins are a very personal choice. Essentially, you just need to choose what you might prefer in any given meal! For example, we like to add some scallions and some chillies. Heat is a big part of a great snack, and chillies in this recipe certainly give it some kick!

Finding the right toppings for your monjayaki is just as personal a choice as the add-ins. However, the only point that we would suggest is that your toppings need to be light, sticky, or both.

For example, we would recommend topping yours with nori. It is super light and will stay on the snack. Also, it will provide an earthy, rich, salty flavour that complements the dashi in the batter. Bonito flakes are also a popular topping with a more savoury taste!

You could also top your monjayaki with cheese. The cheese melts and sticks to the snack, meaning that it would hold together well, and the end snack would be a tasty treat indeed! Alternatively, you could also drizzle Kewpie mayo on top of your pancake to make it creamy!

The sauce mentioned here is used as a topping or dipping sauce to eat your Japanese pancake with. It should be separate from the Tonkatsu sauce which is used as part of the batter. Now that we’ve made that clear, what sauce should you use?

We’ve mentioned before that we love spiciness with a savoury Japanese snack - hence why we suggested adding chillies before! However, if you’d like to make your monjayaki even spicier, then we’d recommend using your favourite hot sauce.

Otherwise, try an earthy spiciness to match the richness of the batter. For that, opt for gochujang - fermented Korean chilli paste. It is particularly strong but also loved worldwide!

Alternatively, you could opt for something not spicy but still quite rich and powerful. That’s the kind of flavour that will play well with a good monjayaki as a complementary pairing: earthy, powerful, and rich.

In this sense, we would suggest toum. Toum is a Lebanese aioli sauce that is made almost entirely of garlic. You will find that this rich and robust garlicky sauce complements nearly everything that you serve alongside it. It might be an odd combination, but we’re confident it would taste exceptional!

What to serve with it

We suggest serving something fresh and light alongside monjayaki, whether food or drink. A good food option could be a small salad with light ingredients - such as cucumber, lemon juice, and sweetcorn.

A good beverage could be a fruit-based smoothie. Something berry-heavy would be bright and acidic, perfect for complementing the earthy richness of the ingredients here!

We would recommend preheating your pan to medium heat for this recipe, similarly to how you might make Japanese stir fried noodles. Cooking in medium heat helps balance the need for high heat to cook the batter and low heat to cook the cabbage and other vegetables in the mixture.

Also, we would suggest using both a non-stick pan and vegetable oil in the cooking process, as you might with a rice dish like Japanese chahan. By following these tips, you will prevent your monjayaki from getting stuck to the cooking surface, which would be disastrous! 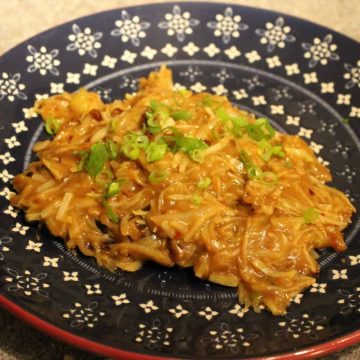 A rich and earthy snack, monjayaki is a wonderfully simplistic and tasty dish that we love to have as a quick lunch or a boosting snack in mid-afternoon. Try it out soon; it’s easier than you might think!
Author: Honest Food Talks
4.95 from 20 votes
Print Pin
Course: Main Course, Snack
Cuisine: Japanese
Keyword: Monjayaki
Calories: 315kcal
Prep Time: 5 minutes
Cook Time: 15 minutes
Total Time: 20 minutes

This post is featured by Twinkl in their Pancake Day 2022 blog.