Yaki Udon Noodles is a traditional Japanese dish that contains protein and vegetables stir-fried in a mixture of sauces, predominantly soy sauce. The most important ingredient in this recipe is, of course, the noodles themselves. If you have ever wanted to learn more about Japanese udon dishes in an easily accessible way, read on!

In this article, we go over everything you need to know about this classic noodle dish. We will show you how to make yaki udon noodles along with some simple ingredient substitutes. Learn about the origins of specific ingredients, ways to prepare yaki udon, and some popular regional variants in Southeast and East Asian countries!

What are Yaki Udon Noodles?

Yaki Udon is a stir fried Japanese noodle dish which is common in bars and restaurants in Japan. The word ‘Yaki’ refers to Japanese cooking method of stir frying the dish. The noodles used for this dish are called udon.

Most cuisines around the world use some form of noodles. Even Western cuisine utilizes spaghetti. In Asian cuisine, however, there are various different varieties of noodles, each used for specific dishes.

Ramen, for example, is made via a Chinese method with wheat. Soba is another type, which is made with buckwheat flour and with a nutty, earthy taste. Udon, on the other hand, consists of thicker and smoother noodles.

Difference between Dried and Fresh Types

Generally, they come in two types: dried and fresh. Dried udon has less dimension and is denser, while fresh udon noodles are springy and light.

We should note that the dried version is usually easier to find. Commonly, you will be able to buy the fresh udon noodles at your local Asian supermarket or made at home with ease as well. In the end, the choice of which to use is mostly up to personal preference.

Udon noodles taste mild when cooked, but have a glue-like taste when uncooked. The fresh ones have a stronger flavour than their dried counterparts. It is regarded as one of the healthiest kinds of noodles, although Soba is generally much healthier.

Although traditionally frowned upon, yaki udon noodles can be prepared with Soba as well if you are in a pinch. Either way, the most important part of preparing these dishes is the noodles, so make sure you have the best possible ones!

How to Eat Udon

In Japan, it is customary to slurp while consuming noodles. There are a number of reasons why this might be.

Firstly, slurping enhances the olfactory reception in the sinuses and perhaps also the taste. Another reason is that it makes it easier to consume food at a high temperature, allowing us to eat them while they are still fresh. Finally, some say it allows the noodles to retain more soup or sauce on their surface.

Yaki udon noodles and yakisoba are both usually eaten out of small, handheld bowls with chopsticks. People usually lift the bowls close to their face, instead of bending down. This method of eating dishes is the overwhelmingly predominant one in Japan.

However, for Western gourmands, there is the option to use forks and spoons instead. We, however, would not recommend this as a good idea if you are in an authentic Japanese restaurant, in Japan, or both!

Ultimately, the method of eating yaki udon noodles is not as important. It is more a matter of public presentation than something of concern during cooking.

There are various different types of udon:

Seeing this list, one might be overwhelmed upon considering the many different types. However, the simplest preparation which can be made from scratch at home is yaki udon noodles. For this reason, we have included this recipe further down in this article.

Yaki udon noodles are not the healthiest carb, but they are not exactly unhealthy either. 1 cup of plain, cooked ones contains 160 calories. Of this, 64 grams is carbohydrates, 1 gram is fat, and the remaining 27 grams is protein.

It contains no essential vitamins or minerals, but it can be an essential filler or starch in your meals. Due to the absence of minerals, soba is considered generally healthier than udon.

Moreover, they are one of the few varieties that are completely vegan. For this reason, udon noodles are often used as a substitute for pasta or ramen. They are not, however, gluten-free. It is gluten that gives them their characteristic texture.

If you do not know where to buy them, visit your local grocery store. If you cannot get it nearby, try checking the nearest Asian grocery store/mart.

One of the most famous ones is the Sanuki Udon from Kagawa prefecture in Japan. Fortunately for us, we can order them online to be delivered for home use!

However, it is important for us to understand the various ways in which they are packaged can also affect flavour. This will help us better pick out which types are suitable for our own preference and circumstance.

Dried types are the most ubiquitously available but often cannot stand up to richer, heavier toppings. It also does not provide the same elastic, smooth mouthfeel which is characteristic of freshly made udon noodles.

Frozen types are found mostly at Asian stores, and are much more suitable for soups. The required serving size can be thawed and the rest can be refrozen without creating a food safety issue.

However, frozen types overcook much easier than fresh or dried ones, so be careful.

Finally, vacuum-packed ones are relatively rare and are mostly sold locally by manufacturers, not retailers. These are usually sought by local noodle shops or Japanese restaurants.

They are the freshest and usually most expensive kind.

Fresh udon noodles can be bought at some Asian grocery stores. However, the shipping, packaging, and retailing process usually wreaks havoc on its structure and texture.

Dried ones last the longest on the shelf, followed by the frozen, vacuum-sealed, and finally the fresh ones. If using fresh or vacuum-sealed ones, be very careful while cooking, and make sure the rest of the preparation can keep the same high standard.

In the end, it is availability, cooking ability, and price point which will decide which variety of udon noodles you use. If your cooking technique is solid, you can even get away with using fresh or dried egg pasta instead.

Necessity and creativity are, of course, the parents of invention!

How to Cook Perfect Udon Noodles

Step 3 may take around 1 to 2 minutes. Alternatively, you can check the instructions on the package. We would suggest for you to try to undercook them slightly if you are finishing them in a stir-fry or a broth to prevent them from softening too much.

If you are not cooking the yaki udon noodles immediately, try to coat them and toss in a little oil to prevent them from sticking after cooking. The high starch content in the carbs usually causes them to stick. Therefore, the motion of rinsing and stirring, as well as the oil, prevents clumping.

If you are faced with persistent clumping, try adding a little salt to the oil.

Once they are cooked, you are ready to add them to whatever dish you wish! Be sure to have your accoutrements ready. It is usually served either cold, stir-fried, in a hot soup, or as a side dish.

Some specific recipes which include this versatile ingredient include:

Now that you know the sheer potential of this humble ingredient, let’s move on to the piece de resistance: our own Japanese stir fry recipe for yaki udon noodles. 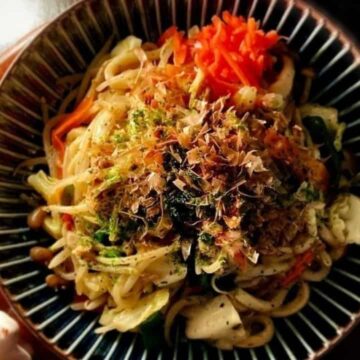 For the Japanese stir-fry

And that’s it! Yaki udon noodles, prepared in less than 20 minutes. This dish will lose its texture if kept in exposure to the air, so put them in a vacuum-sealed container and store the garnishes separately. They will keep for up to two days in the fridge.

For a visual reference on how to cook the yaki udon noodles, you may also refer to Bridge to JAPAN’s step-by-step video guide.

If you are looking for a fast, interesting, and delicious weeknight dinner, look no further than this yaki udon recipe. As a bonus, here are a few regional variants on this Japanese stir fry recipe that are just as easy to make! 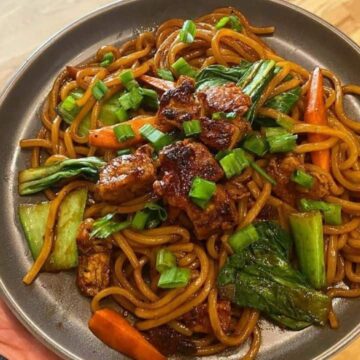 And that’s it! Yet another delicious type of yaki udon noodles dish! But what if you can’t find hoisin sauce? Well, this next dish is our simplest yet and requires only the most basic and quintessentially Asian ingredients. 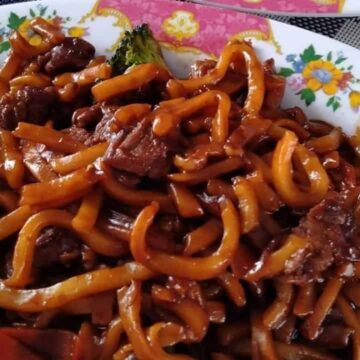 For the stir fry

And that’s everything you need to know about yaki udon noodles and easy recipes to try! Whether you are a beginner or an expert at Japanese cuisine, we hope that this article taught you something.

The yaki udon recipes included can be modified and customized as much as needed. Cooking is, after all, as much about accessibility and creativity as tradition.