Anpan is a beloved Japanese pastry that is filled with a sweet Adzuki red bean paste. So, if you’re a lover of Japanese red bean treats, you will love this sweet treat! Yep, this soft Japanese bread deserves a spot in your heart next to mochi, zenzai and dorayaki.

While many Asian bakeries offer this soft and sweet bun, you too can recreate them at home and enjoy them fresh from your own oven! Here’s our simple recipe on how to bake the classic Japanese pastry at home.

Anpan is a soft round Japanese bread that has azuki bean paste filling. The Japanese term for sweet red bean paste is “An” (餡,あん) or “Anko"(餡子, あんこ), and bread in Japanese is "pan"(パン). Therefore, the meaning of Anpan is literally sweet red bean bread. Apart from the traditional red bean anpan filling, many pastry chefs also use white beans, green beans, sesame, and chestnut as anpan fillings.

The Japanese bun was first made in 1875 during the Meiji period by Yasubei Kimura. He was a samurai who lost his job due to the dissolution of the samurai as a social class. When Japan was becoming more westernized, many samurai were given new jobs. The role of a baker was one of them.

When Yasubei Kimura put Anpan on the market at his bakery, it gained popularity right away. The bun was presented to the Meiji Emperor in the following year. This news spread around through the newspapers and word of mouth. Since then, the bakery and the bread have been highly recognized nationwide. Anpan Day is now celebrated on April 4th, which is the day of the bread presentation to the Meiji Emperor.

Taking inspiration from Kimuraya’s anko pastry, many patisseries have created variations of the bread. The earliest variation is the Tsukisamu Anpan, which was popular among the soldiers during the late Meiji Period. Nowadays, the pastry comes in a variety of textures and fillings. All of which are loved by many.

It has also made appearances in many anime. For example, if you are a fan of Studio Ghibli movies, you might have seen Anpan in ‘Spirited Away’. After cleaning the River Spirit in the film, the main character had eaten a huge bun with red bean paste.

Besides that, there is a famous Japanese cartoon character known as Anpanman. It is a red bean bread hero who gives hungry people pieces of his face to eat. You might have also heard of it from the BTS song, 'Anpanman', where they compared themselves to the cartoon character. In relation to that, the bun is also famous in Korea. However, the locals there call the Korean Anpan ‘Danpatbbang’.

A significant difference between Anpan and dorayaki is the presence of yeast in their dough. The former is made with yeasted batter, whereas the latter isn't. Moreover, the former is a bun that has a bean paste filling. On the other hand, dorayaki is a sandwich of two pancakes with red bean paste. The pancakes also contain a higher percentage of fat than the bun.

They also differ greatly in terms of appearance. The red bean bun is usually round, fluffy, and topped with sesame seeds. On the other hand, dorayaki is slightly flatter and is shaped more like a disc. Therefore, you can easily distinguish them.

This classic Japanese bun tastes sweet and earthy. But just like any other Japanese treat with Anko, it isn't too sweet. It is also a little bit savoury. One could say that the filling tastes pretty similar to a cooked sweet potato with added sugar. The combination of soft bread with the burst of flavours from the filling surely makes it a heavenly treat.

Red bean paste, also known as Anko, is made of mashed adzuki beans boiled with sugar. It can be chunky with the bean shapes still intact or fine and smooth. The chunky form is tsubuan, whereas the smooth form is koshian. It also can be sweetened or unsweetened, depending on the type of food made. Most Japanese treats like dorayaki, mochi, and Anpan use sweetened red bean paste as a filling.

Anko is popularly used among the Chinese, Korean, and Japanese mainly due to its health benefits. It has many nutrients, such as vitamin B6, fibre, folate, and riboflavin. The Japanese love to incorporate it from pastries to desserts to main dishes in their cuisine. However, it is mainly used to make sweets. Hence, Japanese Anko is sweeter than those used in Chinese and Korean cuisines.

Making the Japanese red bean paste on your own from scratch is fairly simple. You just have to rinse the beans and soak them overnight. Then, boil them until they are soft and mushy. To make sweetened Anko, you will have to add sugar and boil it again until it thickens. Lastly, strain the mixture and mash the beans until the mixture is combined.

Our Anpan recipe contains about 280 calories per serving. It makes a wonderful tea-time treat or a light breakfast meal.

The process of making the pastry is lengthy, but you only need a few main ingredients to make it. It won't be difficult to find them as these ingredients are usually available at most supermarkets.

You can also replace instant dry yeast with active dry yeast. The two ingredients are interchangeable. However, you need to dissolve active dry yeast in water before usage. You can activate it with milk at 110 degrees Fahrenheit or 43 degrees Celcius to make your Anpan. It is important to ensure that the milk is hot enough. Otherwise, the yeast won't dissolve properly.

You can use either tsubuan or koshian for the paste, depending on your tastes. Apart from using red bean paste to make the pastry, you can also use other bean pastes. For instance, you can make the pastry with shiroan or white bean paste. This will make Shiro Anpan which tastes very similar to the classic sweet red bean bun. In addition, there are lots of other pastes you can use, such as chestnut, pumpkin, and green bean paste.

You can make this yummy snack vegan friendly with a few tweaks!

You can replace dairy milk with any non-dairy ones to make your Vegan Anpan. Soy milk works best when baking bread that needs a lot of structure. Besides that, almond milk is also an excellent alternative for baking bread.

However, please note that almond milk contains more water than dairy milk. Thus, it will make the bun bake faster. You can use both almond and soy milk at a ratio of 1:1 in place of dairy milk.

As for the egg, you can substitute it with aquafaba, a natural egg substitute for this recipe. It is the liquid that you can get from a can of chickpeas. Three tablespoons of aquafaba usually equate to one egg when making vegan baked goods.

How to make Anpan

Here is a quick process of making Anpan:

What to serve with

We highly recommend enjoying your Anpan with a matcha latte. In fact, it is a perfect match for any kind of Japanese green tea. Thus, you can also serve it with Hojicha. If you don’t prefer tea, snacking on it with a cup of coffee would be heavenly as well.

You can store the Anpan in an airtight container once it cools down. It can last for 2-3 days when stored in a cool place. You can also keep it in the freezer, which would last up to a month. However, we always recommend you enjoy the Japanese pastry fresh out of the oven! 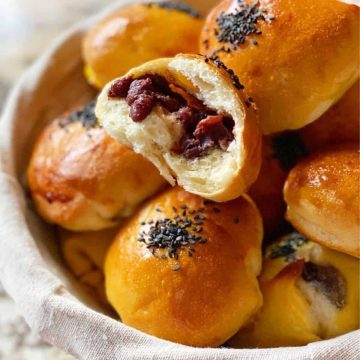 This is a recipe for making Anpan, a traditional Japanese pastry stuffed with red bean paste. You can enjoy this soft and sweet bread as a light meal or a snack. It can also be made vegan with some alterations.
Author: Serena Josrin
4.92 from 48 votes
Print Pin
Course: Snack
Cuisine: Japanese
Keyword: pastry
Servings: 8 servings
Calories: 284kcal
Prep Time: 45 minutes
Cook Time: 15 minutes
Total Time: 1 hour

Wondering what the whole process looks like? Homemade luxuries has an excellent video recipe showing how to make the freshly baked sweet red bean bun at home.

How did your anpan turn out? Share with us your baked masterpieces by tagging us on Instagram @honestfoodtalks! We would love to see how your homemade pastries turned out!