Dorayaki is one of Japan’s famous miniature confections, along with mochi donuts and raindrop cake. It is perfect as an on-the-go snack or a light dessert.

Plus, this soft and airy Japanese snack is a fun treat to make. Try it once, and you might even forget about having the usual American pancakes for breakfast!

Dorayaki is a Japanese dessert consisting of sweet adzuki bean paste sandwiched between soft honey pancakes. It is a palm-sized treat that looks a lot like the typical American pancakes.

But of course, the pastry is named as such only because it resembles the miniature version of a gong. Apart from that, it is also known as Mikasa in the Kyoto dialect.

There are many theories regarding its origin. Back then, it used to be a folded-up cake that looked like an omelette with a thinner dough.

However, the current pancake-like form was not introduced until 1914 by a confectionery in Tokyo, known as Usagiya. The owner took some inspiration from Kasutera or castella cake with European roots.

Nowadays, this Japanese snack is still trendy and loved by children and adults alike. Those who want to try it can get store-bought Dorayaki online or from a local Asian supermarket.

But we recommend making it from scratch since it is as easy as making American pancakes!

If you grew up watching Japanese cartoons, you’d probably know that Dorayaki is the obsession of a robot-cat, Doraemon! Doraemon is crazy for this snack and would fall for any trap that involves it. An episode of the series even revealed that its wish was to eat mountains of Dorayaki.

Well, we can hardly blame it because those sweet treats are delicious!

The traditional confection earned more popularity worldwide thanks to this 70’s anime character. Until now, the mention of the snack is always tied with the character. You can even find many packagings of the snack with the cartoon on it.

Due to that, many have also thought that the Japanese snack is named after Doraemon. However, we’re sorry to tell you that the cartoon only popularised the confection.

As mentioned before, the snack has an ancient origin. It had existed way before Fujiko F. Fujio created Doraemon.

The ‘Dora’ in Doraemon actually stands for Doraneko, meaning “street cat”. Doraemon’s obsession for the treat was only an inside joke made by the creator. Plus, it was fitting to make it Doraemon’s favourite food since it also has ‘Dora’ in its name.

What is the difference between dorayaki and pancake?

Dorayaki is thicker than the usual pancake. Moreover, it tastes more like the Japanese Kasutera sponge cake because it contains honey and mirin (sweet rice wine). On the flip side, American pancakes are thinner and typically only made of eggs, flour, and sugar.

Other than that, this Japanese dessert is more aesthetically pleasing. Unlike most pancakes, it has a flawless surface and an even shade of brown at the top. Because of this, some people call it ‘anime pancake’ since most foods in anime look so perfect.

However, there is a minor imperfection to this snack. The bottom side of the pancake is usually a little scuffed. But this tiny flaw is smartly hidden by sandwiching it with another pancake!

Difference between Dorayaki and Taiyaki

Dorayaki is round, whereas Taiyaki is fish-shaped. The batter is also a bit different as the former contains honey. On the other hand, Taiyaki does not contain honey.

Apart from these differences, both of them are basically the same thing. They are both cooked on dry heat and contain Anko paste. Due to these similarities, Taiyaki is also known as fish Dorayaki.

This traditional dessert has the perfect balance of sweet and savoury. The red bean paste also has a subtle earthy flavour besides contributing to the sweetness of the treat. Thus, it is the ideal dessert for when you want something sugary without an overbearing sweetness.

It is actually similar to eating pancakes with whipped cream or jam, but even better! It is soft, moist, and fluffy, making every bite worth it.

If you are new to Japanese sweets, this is an excellent choice, to begin with. It does not contain any unusual ingredients, which might take a little while for your tastebuds to get used to.

Anko or red bean paste is the classic filling for this honey confection. It is usually made from naturally sweet adzuki beans.

You could say that Japan is Anko heaven since most of their treats contain this red bean paste. Anko has a distinct taste which makes Japanese desserts unique. It comes in two versions, namely Koshi-an, the smooth paste, and Tsubu-an, with whole beans.

Tsubu-an is commonly used for the filling of this Japanese pancake. This type of paste is more popular because it takes less cost and effort to prepare. Plus, this wagashi is meant to be an inexpensive confection for common people. On the other hand, wagashis with smoother Anko paste tend to be more expensive.

Making this dessert is super easy, especially if you already have a premade Anko. The paste is made by boiling the beans and mashing them. You can easily make the paste from scratch by following our homemade red bean paste recipe.

Custard cream also makes a delicious filling for the snack. It is one of the most loved garnishes and fillings for most pastries, such as cream puffs and croissants.

The ingredients you need to make homemade custard are:

Here are the steps to make the custard:

Another popular flavour of this little treat is cookies and cream. It has gone viral all over the internet for all the right reasons. The pancake is made with Oreo cookies and filled with white Oreo cream for this version.

To make Oreo Dorayaki, you will only need:

The process of making it is also quite simple:

Chocolate goes well with almost everything. Therefore, it is one of the common fillings for this fluffy wagashi. A common ingredient used to make this filling is the famous chocolate hazelnut spread, Nutella. But you can also make the chocolate filling on your own if you have more time to spare.

To make the chocolate filling from scratch, you will need:

And here are the steps to make the chocolate cream:

Many, especially matcha-lovers, also love matcha cream filling. It maintains the Japanese concept of the dessert, but with a bit of twist. The distinct taste of matcha complements the sweetness of the fluffy pancakes really well.

The matcha filling calls for:

To make the matcha cream:

The variation of fillings for this round snack does not just stop there. It indeed has evolved and now comes with tons of other variations.

Some interesting ones that are worth trying include cream cheese, lemon cheesecake, and strawberry. Don’t want to spend too much time making the fillings? Just use your go-to spreads like peanut butter and Kaya.

There are no restrictions on what to use as filling. You can even slightly modify the standard Anko version by adding whipped cream. This will turn it into Nama Dorayaki!

This traditional Japanese dessert has about 271 calories per serving. Tiny yet filling, it is a sweet snack you can indulge in at any time.

These are the key ingredients that you will need to make the sweet snack:

How to make Dorayaki

It is really easy to make this Japanese confection on your own:

What to serve with

Dorayaki tastes amazing on its own, but it also goes well with a couple of things. For instance, this wagashi pairs well with a glass of milk. This combination makes a great breakfast option for most students. Other than that, you can also enjoy it with a nice cup of coffee as an on-the-go meal.

Some would also prefer eating it with a Japanese yoghurt drink. However, it is best to serve it with a cup of Japanese green tea or matcha latte. The sweetness of the snack somehow compliments the slight bitterness of the drinks.

You can store the wagashi in an air-tight container, and it will last for a couple of days. But you can freeze them if you want to make lots of Dorayaki and store them longer.

Simply wrap each pancake with a cling wrap, put them in a Ziplock bag, and keep them in the freezer. The frozen wagashi will usually last up to a month. 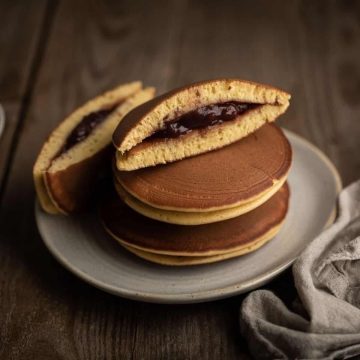 If you would like to watch the whole process before trying it yourself, check out the video recipe below! April’s Bits and Pieces Youtube channel made an easy to follow video for any home cooks to give the Dorayaki recipe a go!

Love Asian desserts and snacks? Follow us on Instagram @honestfoodtalks to get inspired with a variety of traditional and modern treats to soothe your sweet tooth!