Mentaiko pasta is one of our favourite Japanese-style pasta dishes. Originating from the land of sushi, it is a pasta noodle dish that has cod roe as its main ingredient. However complex it sounds, it is actually very simple to make! It is full of umami deliciousness and is a welcome alternative to traditional Italian pasta recipes.

We have put together a comprehensive guide to this tasty western-influenced Japanese dish. So, you will know what it is and exactly how to make it. In addition, we’ll also cover the differences between this and other similar traditional Japanese ingredients. We’ve perfected this mentaiko pasta recipe and know you’re going to love it.

Mentaiko is cod roe, which are the sacs of codfish. The cod roe used in this noodle dish is salt-cured and marinated in spices. It’s used to make a cream, poured on top of spaghetti noodles.

Mentaiko pasta has a spicy taste because the cod roe is marinated in spices. However, to much delight, it’s also creamy and rich.

It is a noodle dish. Therefore, its texture ranges from al dente to soft depending on how it’s cooked.

Mentaiko itself is very popular. Many people in Japan and parts of Asia love it, and it’s gaining traction in other parts of the world, too.

You can also use this type of cod roe in dishes other than pasta. Here are some of our favourite ways to use it:

Mentaiko pasta has about 450 calories per serving.

Cod roe pasta has very specific and crucial ingredients like many pasta dishes. Without their use, it wouldn’t be considered cod roe spaghetti. You can, however, substitute the other ingredients.

Here are the mentaiko pasta ingredients you need, where to buy them, and whether you can swap them or not:

Spicy cod roe is obviously an ingredient that is vital to this Japanese noodle dish. You can find this at most Japanese grocery stores and some Asian supermarkets. Otherwise, you can also purchase them online and they will often come as mentaiko cans or tubes.

Spicy cod roe is often hard to come by, so you can buy a mentaiko pasta packet instead. Our favourite is S&B mentaiko pasta sauce. You can purchase the pre-made sauces online.

If you use a packet of sauce rather than making your own, you won’t need half and half or olive oil, as the sauce is pre-made.

Spaghetti is another crucial ingredient in mentaiko pasta. Try thin spaghetti or angel hair noodles if you don’t care for spaghetti. Most of the time, you can find any of these at your local grocery store.

Half and half (Milk and Cream)

Western cooks often use ‘half and half’ for the mentaiko sauce. However, you can easily replace them with a combination of milk and heavy whipping cream. Use two tablespoons of each instead of half and half.

If you adhere to a dairy-free diet, there are soy substitutions for half and half that will suffice for this recipe. If you can’t find something pre-made, use soy whipping cream and plant-based milk instead.

Olive oil can be substituted for butter and other oils like avocado or sunflower. Note, though, that changing the oil can affect the taste.

There are several options for a garnish. Many people like nori and beefsteak plants, but you can use whatever you prefer, like a different type of seaweed, for instance. These can all be purchased at your local grocery store or online.

Difference between Tarako and Mentaiko

Tarako is salted cod roe, while mentaiko is spiced and marinated cod roe. As a result, their taste is different and their method of preparation.

You can use tarako for this dish instead of mentaiko, but it will be far less flavorful. Instead of having a bit of a kick, the dish will just be salty.

Difference between Tobiko and Mentaiko

Tobiko is flying fish roe, while mentaiko is spicy cod roe. There is a major difference in colour and flavour. Chefs most commonly use tobiko for sushi.

You can use tobiko for this dish, but it will also change the flavour. It’ll be smoky and a little sweet rather than spicy. You could use tobiko as a garnish, though. Again, it’s uncommon, but it would add a new dimension of flavour and add colour.

You can make mentaiko pasta with other noodles than just pasta. Here are some of our favourite variations on the Japanese fusion dish:

As mentioned, this is a simple dish to make, but here are some tips to help you:

As you add your noodles to a cold sauce, they will not cook any longer once you have removed them from the boiling water. Therefore, you must cook them to your desired softness initially.

To make your noodles more al dente, don’t cook them for quite as long. Instead, take them out about one or two minutes before the package says, and don’t add them to the pot until the water is boiling.

To make your noodles softer, cook them longer. Don’t cook them too long, though, as they could become soggy.

Add a little more half and half to make your mentaiko pasta sauce really creamy. If you want the entire dish to be creamier, adjust the ratio of sauce to noodles. You may need to double the sauce recipe.

To make it less creamy, add some pasta water. This will thin the sauce a bit. Be careful not to add too much, though, as it could become too runny.

To make your sauce creamy, you need to whisk it well. It may help the texture a bit to chop the cod roe beforehand, making it smoother.

Perform the steps in the correct order

Part of this recipe’s appeal is its simplicity and short cook time. Of course, it’s always important to follow the steps correctly in a recipe, but especially with this one. We wrote this recipe to optimize your time and make it as simple as possible. Deviating from the recipe too much will add to your cook time.

Although it isn’t exactly a cooking tip, it is something to note. You should not reheat cod roe spaghetti (one reason the recipe only serves two) because it’ll cook the roe. So there’s no need to store it unless you like cold pasta.

Dishes to serve with Mentaiko Pasta

Cod roe spaghetti is delicious and filling enough to have as a full meal. However, this recipe only serves two, so you may want to add other dishes to your meal if you’re serving more people. Here are some of our suggestions:

Adding protein is a quick way to make a pasta dish into a full meal, and salmon is perfect. Moreover, the addition will balance the pasta dish flavour-wise and complement the texture.

Seared scallops are another underwater protein that goes well with this Japanese noodle dish. Their tender texture makes for the perfect addition next to your noodles. You can put them right on top of the noodles.

Keep the creamy and spicy theme alive with a Kani Salad. You’ll get protein from the crab and more nutrients from all the vegetables.

Other Western-influenced Japanese recipes to try

If you love this mentaiko pasta recipe, you’ll love our other western-influenced Japanese recipes, too. Check these out: 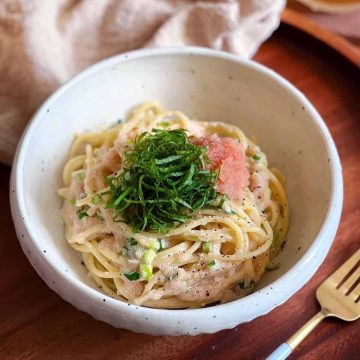 Preparing your garnish will look different depending on what you use. It will likely entail chopping. Make sure you know if there are any parts of your chosen garnish that should not be consumed.  Do not rinse your pasta before adding it to your sauce. Rinsing will strip the noodles of their starch and make it more difficult for the sauce to stick.  If you are using a packet of pasta sauce, skip steps three and four and follow the directions on the sauce package.  Don’t forget to save some pasta water before draining in case you want to adjust the level of creaminess.

HACHI Channel on Youtube shows the complete process of how to prepare this uniquely Japanese pasta dish. We also recommend learning from them how to make spicy cod roe pasta at home!

Love our Japanese home recipes? Don’t forget to follow us on Instagram @honestfoodtalks.com to get updates on new easy Asian home recipes!

« Turkish Coffee Recipe: How To Make It The Right Way
Easy Mochi Recipe: How to Make Mochi in a Microwave or Steamer »