Napolitan is a must-try Japanese fusion dish for both pasta and ketchup lovers. Ketchup works with so many dishes, but have you ever thought of having it with your pasta? As weird as it sounds, we highly recommend you try it! It is as comforting as the Japanese chicken rice, and you can even have it with your favourite Japanese coffee jelly!

We always think Italian whenever we crave pasta. However, you might want to consider this Japanese creation the next time you need a spaghetti fix. Who knows, it might just be another go-to meal to satisfy your hunger pangs ASAP!

Napolitan is a Japanese pasta dish made with sausages, bell peppers, mushrooms, and ketchup. While it isn’t an Italian dish, it is an authentic Japanese yoshoku. In other words, Japan's take on Western-style food. So, don't let its name fool you into thinking it is an Italian dish!

A chef named Shigetada Irie at Hotel New Grand in Yokohama invented the iconic dish after World War II. The hotel accommodated the American troops during the Japan Occupation for 7 years since 1945. The chef got inspired to recreate the dish after seeing the soldiers eating plain spaghetti with ketchup.

The essence of this dish is to not make it al-dente on purpose. Instead, Shigetada Irie let the cooked spaghetti sit for a few hours to soften it. He did it to adapt to the Japanese palate, which is more accustomed to soft noodles. He named the creation after the Italian city of Napoli, known as Naples in English.

One should not mistake this Japanese dish for the Italian Neapolitan pasta.

This dish is salty, sweet, and tangy all at once. The sausages add saltiness to the dish, whereas the ketchup contributes to the sweet and tangy taste. Some people have described this dish as the pasta version of Omurice. You can also have it with spicy kani salad as a side dish to entertain your palate with more flavours.

The Japanese fusion dish is prevalent in Japan due to the uniqueness of the ketchup-based pasta sauce. In fact, ketchup is so famous that it is a part of many other yoshoku dishes. Some other dishes include:

The dish is also inexpensive yet filling. Due to that, it has become the go-to meal for many people. You can even get instant Naporitan in Japan nowadays.

Besides that, it is a standard lunch menu in many schools across Japan. Undeniably, the love for the dish remains even when the kids turn into adults. This explains why the wafu pasta is widespread among young and old.

This dish has even penetrated into Japanese manga and anime series such as Shokugeki no soma (or “Food Wars! Shokugeki no soma” on Netflix). The Food Wars recipes are a way for the anime series to highlight Western-Japanese fusion recipes including this Napolitan recipe, Chaliapin Steak recipe and more!

A significant difference between Napolitan and Bolognese is the sauce. As mentioned before, the wafu pasta has a ketchup-based sauce. On the other hand, Bolognese sauce is meat-based and rarely incorporates tomatoes.

You can even tell the difference by the types of meat used for the dishes. For example, the ketchup pasta uses cured meat like sausages, whereas Bolognese uses finely-chopped meat.

This ketchup dish contains 800-1000 calories per serving. It makes a perfect nutrient-packed meal that you can enjoy for lunch and dinner.

Naporitan ingredients generally used include spaghetti, cured meat, ketchup, milk or cheese and spices. We'll break down what you need to look out for when choosing these ingredients below.

A typical Spaghetti Napolitan recipe calls for the classic spaghetti. Thicker spaghetti will take longer to boil, but it will better hold up to all the other ingredients. However, you can use any other pasta, such as fettuccine, if you wish.

Cocktail sausages, bacon, and ham slices are the most common for the dish. However, you can use Japanese Kurobuta (black pork) sausages to make the dish more Japanese.

Mushrooms are a common addition to the Japanese fusion dish. The recipe is very versatile, so you can simply throw in whatever type of mushrooms you like. You might also want to use them as meat substitutes to make the dish vegetarian-friendly.

Onions and green bell peppers are the common vegetables for the dish. You can also add other veggies on hand if you like.

Ketchup is the main component of the dish. So you can't forget this one! We're sure you already have a bottle of it at home, but you can easily purchase one at any supermarket. Alternatively, you can prepare your sauce with tomato puree, tomato paste, some sugar, salt, spices, and vinegar.

Milk adds richness to the dish. Meanwhile, it’s not a complete pasta dish without parmesan cheese!

Spices can help enhance the flavour of the dish. The most common ones are salt and pepper. Other than that, you can also add in basil and oregano. You can also add Chilli peppers or hot sauce if you prefer your pasta dish spicy.

This yoshoku is a simple pasta dish that requires simple and accessible ingredients. The ingredients generally used are pantry staples in your kitchen. Therefore, you probably won't have to hit the grocery stores to start making it!

Napolitan has several variations, thanks to the nation's love for the dish. Here are some of the common and popular variations you can try.

Make it with other pasta! Apart from making it with spaghetti, you can enjoy the dish with different types of pasta. Yes, nothing is stopping you from making Macaroni Napolitan! You can also enjoy it with angel hair, fettuccine, penne, or rotini.

Napolitan-style Udon is a variation that replaces the Italian pasta with udon. This version is softer, and chewier which makes the dish even more authentically Japanese.

Spaghetti Pan is a must-try. Japan is famous for stuffing food into bread, and the ketchup pasta is no exception! This variation allows you to enjoy the spaghetti dish just like your favourite Subway sandwich or hotdog.

Napolitan Pizza: You can also enjoy the tasty ketchup sauce, sausages, and veggies on pizza dough. 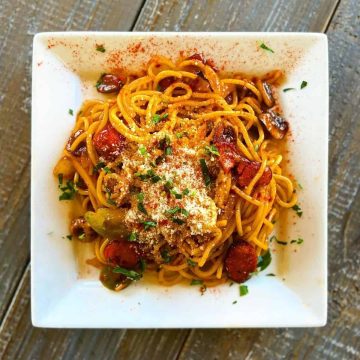 My Midnight Japanese Recipes on Youtube has a great video showing how to prepare this creative pasta dish. We highly recommend checking out their video recipe!

Inspired to create more Japanese fusion pasta dishes? We recommend checking our recipe on how to make Mentaiko pasta at home!

Want to learn more about how to make creative Asian homemade dishes? Follow us on Instagram @honestfoodtalks to get inspired!