Taro paste is a versatile sweet filling that is traditionally made of three essential ingredients: steamed taro root, coconut milk, and sugar. The paste is used in various Asian and Western treats due to its unique aromatic sweetness that is a favourite among many.

Though used by many cafes and bakeries, the process for making the sweet filling is relatively easy. It can be made and stored easily at home for repeated uses across many treats!

As a common starchy root plant used in many countries across Asia, Africa, and Oceania, taro is used a staple ingredient for both savoury and sweet dishes. In particular, taro paste is widely used in dessert and pastry recipes.

Though the leaves of the plant are also edible, the corm is more widely used in cooking. When cooked, it released a mild sweetness and has a potato-like texture. In addition, the taste of the corm also has a nutty tang which makes it a favourite ingredient by cooks.

Due to the phenolic pigments abundant in the root's corms, they give out a delightful light purple colour. Therefore, it makes using this plant in cuisine even more attractive due to its additional aesthetic value.

Because of the above reasons, the delicious root vegetable has grown to become a key ingredient to a diverse range of dishes globally. As a recent popular development, we observe that taro has become a popular bubble tea flavour in countries with a boba milk tea-drinking culture.

What is taro paste used for?

The sweet filling is used as a key element in many Chinese snacks such as the mantou, nian gao and shaobing.

A lot of Asian bakeries use the paste as a prime flavour in their pastries. An example is the taro paste bun or the taro mooncake which can be found in many bakeries in China.

Meanwhile. the Japanese have devised taro as a filling in their supple rice cake dessert, the mochi.

Western cuisine has also embraced the paste of this starchy plant as a component of their dessert and snacks. By mixing the paste with butter and cream respectively, taro buttercream and whipped cream can be formed. These are suitable to add to cakes as frosting!

We would like to highlight that if you see the paste used having a very vibrant purple colour, it may not be entirely true. Though this starchy plant when cooked has a purple colour, the natural hue is very light and not too vivid. Additional ingredients or colouring may have been added if the purple colour is very strong.

How to make taro paste

The process of making the paste is simple to learn and can be done at home fairly quickly!

The method described in the following recipe can be used for other types of fillings too such as chestnut, yams, or lotus. The filling can be used for many different treats such as taro balls, taro mochi, and more. 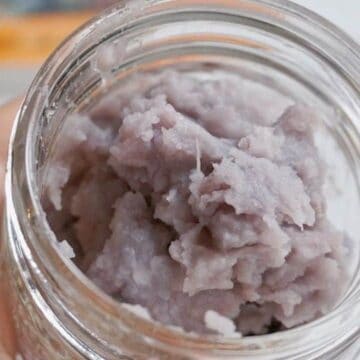 Taro paste is sweet and nutty that is suitable as a filling for many different types of pastries and cakes. Once prepared, it can be stored to be used for the long term.
Author: Ruiz Asri
4.74 from 15 votes
Print Pin
Course: Snack
Cuisine: Chinese
Keyword: taro
Servings: 15 portions
Calories: 300kcal
Prep Time: 15 minutes
Cook Time: 25 minutes
Total Time: 40 minutes

Variations to the recipe

In some cases where it is difficult to mash the starchy root plant into a smooth paste, use a blender to further smoothen the paste.

Using a rice cooker with a steamer function is a good trick to easily steam the plant. You can then immediately mash the ground root in the rice cooker.

If you would like, you may choose to even add some pandan to the ground root during the steaming process. This would add a pandan aroma to the overall flavour of the taro paste.

Although the above recipe uses vegetable oil, you may choose to replace the oil portion with more coconut milk instead. This depends on how creamy you would your paste to be.

In the case that you do not have any coconut milk at hand, you may also replace it with whipped cream, butter and condensed milk. The absence of coconut milk will change its flavour slightly. Hence, do give it a try and decide on your preference!

How long can you store taro paste?

Once prepared, you can store the paste in a sealed container in the fridge for 1 to 2 weeks. You may also choose to freeze the blend which would keep it good for 1 to 2 months.

Make sure you defrost the puree to room temperature before reusing.

A quick dessert you could make after preparing the paste is Orh Nee (芋泥). This traditional Teochew dessert is essentially sweet taro paste served with ginkgo nuts.

Popular amongst Chinese Singaporeans and Malaysians, this treat is easy to make once you have the paste ready.

You may choose to boil the ginkgo nuts with some pandan leaves and a bit of sugar if desired. This would add an extra sweet tang to the nuts.

This dessert is suitable as a light treat after a meal or as a midday snack.